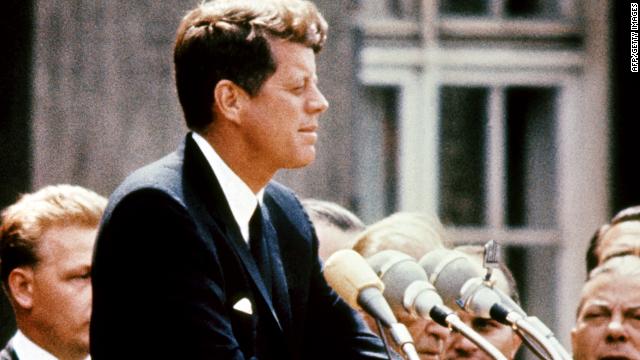 Why JFK’s death still fascinates us

Editor's note: Fareed Zakaria is the host of Fareed Zakaria GPS, which airs Sundays at 10 a.m. and 1 p.m. ET on CNN. This is the fifth article in a series on America’s identity and image since the assassination of John F. Kennedy.

Watching the outpouring of interest and emotion surrounding the anniversary of President John F. Kennedy’s assassination 50 years ago today, one has to wonder what is it about the man and the moment that so fascinates us.

At one level, the interest is obvious, indeed epic. The story of a young hero, cut down in his prime, has been with us since the age of myths. And Kennedy was a heroic figure – young, handsome, energetic, idealistic. He had a beautiful wife and two lovely children. He has an easy air of charm and grace about him. And then, there he was on the backseat of a car in Dallas, with his head shot off.

Robert Caro, the great historian and biographer, points out that Kennedy’s death was also a unique, cathartic moment for America because of the advent of television. He notes that the Nielsen ratings show that in the four days following the assassination, Americans watched an average of over 8 hours of television a day – all watching the same pooled feed. It became a great national mourning, made all the more so by that elaborate and momentous funeral procession.

But beyond Kennedy and beyond television, I think there is another, deeper reason why this event so captures our attention and interest. It marks a great divide in modern day America, between the world before the assassination and the world after.

Think of what America looked like in November 1963. It strode the world like a colossus, comprising 30 percent of global GDP. All the great global companies were American, all important industries were dominated by American firms. The United States had defeated Fascism in Europe and Asia and then, at staggering cost, rebuilt its enemy nations from the ground up. The Pentagon was seen as the most advanced fighting force in the world, now applying the management techniques of American industry thanks to newly appointed Secretary of Defense Robert MacNamara, previously the president of the Ford Motor Company.

More from GPS: How would JFK have handled Iran?

Kennedy’s administration had taken American power and put it to purpose, founding the Peace Corps, expanding American foreign aid programs, helping start what would be known as the Green Revolution. Americans trusted their government and the world trusted America.

Now fast forward to five years later – 1968. There are race riots in every major American city. Robert Kennedy and Martin Luther King have been assassinated. The United States has 500,000 troops in Vietnam and yet seems unable to prevail in a military fight against one of the poorest countries in the world. Anti-war protests, the civil rights movement, a new women’s rights struggle, and general youth rebellion combines to attack every one of America’s cherished and established institutions. At home and abroad, America is under siege.

More from GPS: Why Americans are intrigued by conspiracy theories

When Americans look at that picture, they must, in some sense wonder, what if Kennedy had not been killed? Would we have been in Vietnam? Would the civil rights protests have gotten so ugly? Would there have been race riots? Would people have lost faith in their government, universities, and leaders? And they imagine a world in which America moved into a different future, one that looked more like 1963 than 1968.

The reality is that, most likely, most of the things that happened in 1968 would have happened anyway – with the exception of Vietnam, about which one can certainly hold the view that Kennedy would not have escalated the conflict in the way that Lyndon Johnson chose to do. But the other things that happened in America were part of long-simmering forces that would have erupted in some way, no matter who was president.

But that won’t stop us always wondering – and dreaming.

Topics: Uncategorized
Next entry »Historian: Nothing makes me think LBJ tied to JFK’s death
« Previous entryWhat would JFK have done about Iran?

Next entry »Historian: Nothing makes me think LBJ tied to JFK’s death
« Previous entryWhat would JFK have done about Iran?