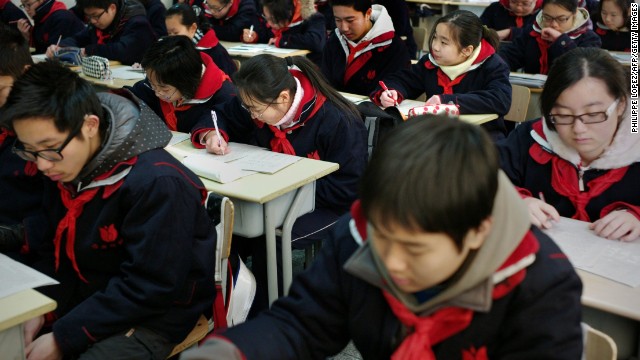 Zakaria: U.S. must spend more on education for poorer children

The latest results of a new global exam given to 15 year-olds showed American students to be average in science and reading and below average in math. There were little or no gains in the last decade, while other countries raced ahead of the United States. Anderson Cooper speaks with Fareed and Amanda Ripley, author of the Smartest Kids in the World and How They Got That Way, about why children in Shanghai and Finland seem to be doing so much better. This is an edited version of the transcript.

Fareed, this latest study is one of a continuing string of studies that shows the U.S. educational system lagging behind the rest of the world. What do you make of the results?

Zakaria: The study is very revealing. What it shows is that while we're sort of walking around in one of those people movers going nowhere, the rest of the world, very many countries, are on escalators. What this shows is that it's not so much that we've been doing anything dramatically badly, but in the context in which everybody else is playing to win, we're falling behind badly. And all of a sudden, we look at the difference between us and countries like South Korea and Singapore and it's widening. But increasingly, the gap between us and countries like Poland is also widening.

And, Amanda, you look at Vietnam, which just started this study and has a lot of child poverty, they've done really well. I mean, what are we doing wrong and what are they doing right?

Ripley: It was shocking to see Vietnam for the first time ever appearing in this test at the very top of the rankings. You know, up there with Finland and Canada and Poland, Estonia, too. These are countries with significant levels of child poverty, plenty of problems.

And they're not spending as much on education in a lot of cases as people in the United States is.

Fareed, what do you see as what the United States could do better or is not doing well enough?

Zakaria: Well, at one level we're just not playing to win. There isn’t a real national focus that drives down to the states that we really are falling behind. Lots of people believe we're not and we're number one and we do things great. The first thing is these countries, almost all of them, their kids go to school a lot more than we do. They have much longer school days. They have much longer school years.

More from GPS: What Finland can teach us

Amanda, do you agree with it?

Ripley: It’s complicated. Because on the one hand I think that's true in many countries, that they are spending more time in school. On the other hand, other countries are spending about the same time in school like in Finland. American teenagers, for example, do more hours of homework than some of the students in some of these countries. What seems to matter most is not the quantity but quality. They are being asked to do a lot of work that maybe doesn't actually make them think very much for themselves, and you can see that mirrored in these results where the kinds of math problems that American kids are doing well on are pretty basic problems that require them to just, you know, deliver the result. And the kinds of problems they're really struggling with compared to their peers around the world are the kinds that involve thinking, that involve taking a real world problem like, say, figuring out the tip at a restaurant and turning it into mathematical thinking.

So those kinds of things that we know are really valuable in the economy today, those higher order skills are what's being neglected in the U.S.

Zakaria: What's most scary about it, along those lines, is that until about 10 years ago, one consolation was the very best American students did pretty well. We ranked, the best kids in Massachusetts were up there with Singapore and South Korea. No longer true. Even our best students are no longer at the very top. They're doing OK. But they're not up there with Shanghai, Singapore, and South Korea.

Does some of this have to do with how education is funded in the United States?

Zakaria: The simple difference if you were to look at all these other countries, particularly the good ones, in those countries they spend more on poor kids, on kids who are disadvantaged, on the theory they're the ones who need the most help.

Our system, as you know, is funded by property taxes. So we do the opposite. We tend to spend lots of money in affluent suburbs, we spend relatively less money in inner city places. And that means those kids, those disadvantaged kids really never have a chance to catch up.

So, Amanda, what is the takeaway on this?

Ripley: Well, I think it's true what Fareed is saying. We could do much better on equity, we should put much more attention into raising the bar for who gets to study teaching in college and how rigorous that training is. And I think the fact that 45 states have agreed on a set of common core standards which are more rigorous and aligned to international norms, if we can keep pushing through all the controversy around this and get to a good place, that's a huge step in the right direction.