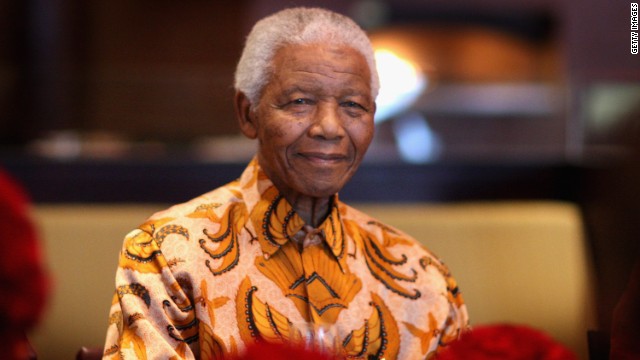 Zakaria: We haven't seen leadership like Mandela's for a long time

CNN speaks with Fareed about the death of Nelson Mandela, his legacy, and what set him apart from other leaders. This is an edited version of the interview.

Nelson Mandela was a world leader who made such a change, not only in South Africa, but he inspired so many people around the world.

Absolutely. You remember, this is a man born in 1918, born when the sun never set on the British Empire, and who lived a long life, and was part of a kind of tradition of nonviolent resistance to colonial power and colonial oppression that was part of the Indian independence movement. He was greatly inspired by Gandhi, by the nonviolent struggle.

And that was one of the most remarkable aspects of Mandela, when he came out after 27 years in jail. I remember being struck by even his speech pattern. It was like he came out of a different era. He came out of an age when giants walked the world – Gandhi, Nehru, Churchill, FDR. He was really part of that world, but had just been frozen in a jail for 27 years.

But when he came out, it turned out he retained not just the speech patterns and some of the mannerisms and some of the formality, he was the man who almost seemed to always wear a suit, no matter where he went, until he left the presidency.

He had this belief that it was very important to set certain standards. And he demonstrated it with the Truth and Reconciliation Commission, with the fact that there was no vengeance taken of any kind, that he didn’t even dismiss most of the people who worked for the Afrikaner state. And, of course, eventually by being South Africa’s George Washington. He only served one term because he thought it was very important that he demonstrate that he was voluntarily relinquishing power.

More from CNN: 'He belongs to the ages'

So that whole trajectory from 1918 to now has been one of leadership by example. And leadership of a kind that, frankly, we haven't seen for a long time in the world.

What did you think about what President Obama had to say about Mandela?

One of the things that President Obama reminded us was that this was one of the great moral causes and political causes of the 1980s and ’90s. You remember it well, and we have forgotten now, but it was one of the great rallying causes on college campuses around the Western world. It was even true in Asia.

It was a cause that really was global in a way that very few were because it was such a sore, a cancer, on global society, the idea that you had this white minority regime treating African blacks almost like slaves, and this extraordinary system of institutionalized serfdom that was apartheid.

And Obama reminds us that he, like many, many people, spent some time protesting against it, probably did so when he was in high school, and that that world has gone away. But one of the reasons it has gone away, and has gone away in such a kind of harmonious way, is because of Nelson Mandela, because when he came out of jail, he made a decision that he was going to reach out in a hundred small ways and some very, very important ways.

I remember talking to a South African, somebody who was there at the time, who pointed out that the new ministers in Mandela’s government had been told they couldn’t fire anyone who represented the old apartheid African system because Mandela had said the whole old order stays intact.

Now think of that when we think about what's happened in Iraq, what's happened in all the post-Soviet states when the new guys come in, the new regime comes in, they wipe out the old. Mandela represented something very different, and so from the protests of the ’80s to the forgiveness of the ’90s, it’s a story.

Is it overly naive to hope and pray that maybe the death of Nelson Mandela will inspire some of those world leaders out there right now to do the right thing, to recognize that bloodshed and warfare will not achieve much, that peaceful relations perhaps can better be achieved through dialogue and discussion and hard work, as opposed to war?

It is naive, and you probably know that as well. You know, they say that difficult times throw up great leaders. It’s true that if you think about World War II and the Depression, it produced these great, larger-than-life figures. Mandela came out of those times, the hardship of apartheid, the brutality of it.

But of course the thing we forget is that it doesn't always mean they will be great reconciliators, that they will be able to transform the countries. There are people like Gorbachev who were able to take the Soviet Union and do away with the bad, but couldn’t really build the good. Mandela had a kind of political genius, outside of just the moral courage.

Was he going to take South Africa to become a kind of rogue nation? What was interesting was he steered South Africa in the direction of being part of the world community, pro-Western, very much part of the democratic world. But at the same time, he stayed personally loyal to the people who had supported the struggle for 27 years while he was in prison and for decades beyond that. And so he had that way, that genius of figuring out how to steer the country in the right direction without completely forsaking your friends, without losing some of the things that gave you the fire. So that kind of genius I don’t think we have right now anywhere.

You expect that almost all of the world leaders will be moving forward, and so many of them will go to South Africa to pay their personal respects?