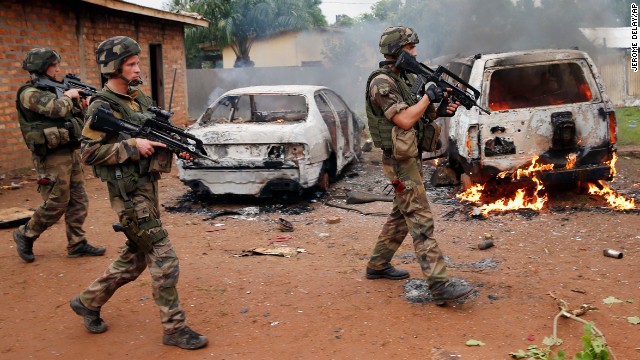 By Susanna Flood, Special to CNN

Editor’s note: Susanna Flood is Amnesty International’s director of media. The views expressed are her own.

What do you say to a grieving widow whose two sons have just been killed and who has 15 grandchildren at home to look after?  How do you respond when the children with whom you have just been laughing and joking – who fled with their families to a rapidly growing camp for displaced people – tell you they are hungry and haven’t eaten for two days?  How should you feel when you watch a seething mass of humanity taking refuge in desperate conditions because they feel safer there than in their homes?  What should you say when a chill goes through you as you hear people, time and time again, blame the Muslims or the Christians for their plight?

There are no easy answers to these questions but this is the reality in Bangui, capital of the Central African Republic today. Conditions are desperate. And people are very afraid.

Four days after an armed group launched a flash attack on Bangui, more than 60,000 people have taken refuge in various locations around the city. Many have fled to churches; similar reports are being received from mosques – though on a smaller scale. But the largest number has taken refuge around the airport, which is known to be secure because of the presence of French forces.

These people are fleeing their homes out of fear. Reports are still being received of armed groups threatening, killing and pillaging different residential areas. Neighbors who say they once lived peacefully together are now in fear of each other, virtually at war, casting aspersions on others only on the basis of their religion.

They could easily go home. They have not come far. But this is unlikely to happen until they feel a real sense of security. In the meantime, reports are being received of women giving birth in camps in the open air with no medical aid while sick children are also suffering.

Médecins sans Frontières – and other NGOs – are doing an amazing job, providing treatment in the hospitals and in the camps. But this long-running crisis has escalated so dramatically since the outbreak of violence overnight on December 4-5 that no one is equipped to handle what is happening right now.

The arrival of new French troops has given a small sense of protection, even more so now that they can be seen patrolling on foot. The Multinational Force of Central Africa (FOMAC) forces, too, provide much-needed protection, but there is widespread mistrust for their Chadian contingent, perceived as sympathetic to some abusive ex-Seleka forces.

Everyone in this small city has either lost a relative or knows someone who has died in these few short days of violence. And this mirrors what has already happened across the entire country where entire villages have been wiped out.

While re-establishing law and order across the city is the most urgent priority, this is not enough to address the much-deeper roots of this crisis. Justice must be delivered to the people of the Central African Republic if it is ever to heal itself and people are to live in peace with each other again.

Topics: Africa • France
Next entry »Is Iran set to lash out at Saudi Arabia?
« Previous entryHow Mandela shaped the conscience of the world

Next entry »Is Iran set to lash out at Saudi Arabia?
« Previous entryHow Mandela shaped the conscience of the world