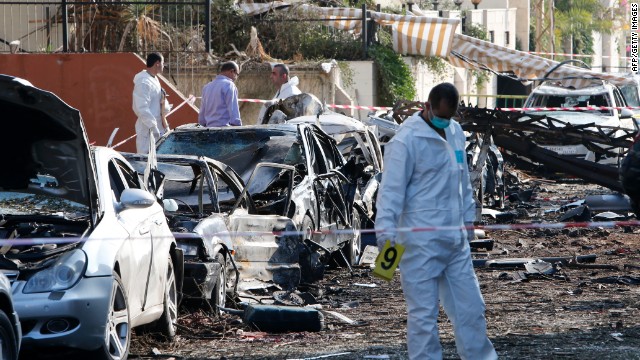 Is Iran set to lash out at Saudi Arabia?

By David Schenker, Special to CNN

Editor’s note: David Schenker is director of the Program on Arab Politics at the Washington Institute for Near East Policy. The views expressed are his own.

The November 19 double-suicide bombings of the Iranian embassy in Beirut may have looked shocking in the headlines – they killed 23 people. But they also should not have come as a surprise.

Since 2011, Tehran has earned its karma in Lebanon. The attack, whose victims included an Iranian diplomat, was likely payback for the Shiite theocracy’s unwavering support for the Bashar al-Assad regime’s brutal repression of the largely Sunni uprising in Syria. Aided by Iranian troops, weapons and its Lebanese Shiite proxy militia Hezbollah, over the past three years, al-Assad's government has killed nearly 130,000 mostly Sunni Syrians.

The real question is what comes now – and I expect a surge in regional violence. Paradoxically, the international “first step” nuclear agreement with Iran increases rather than diminishes the chances that the Shiite theocracy in Tehran will take steps that exacerbate the regional sectarian conflict.

Notwithstanding the optimism surrounding the “moderate” presidency of Hassan Rouhani, Iran has a long history of pursuing provocative – and oftentimes deadly – policies during ostensible periods of conciliation with the West. Consider that during presidency of the “moderate” Hashemi Rafsanjani, an administration in which Rouhani served on the National Security Council, Iranian proxies were widely viewed as responsible for attacks on both the Jewish Community Center in Buenos Aires in 1994, and U.S. Air Force barracks in Saudi Arabia in 1996.

The term of “reformist” President Mohammad Khatami was equally distinguished. Under Khatami, Iran continued its longstanding policy of targeting dissidents abroad and increased its support for Palestinian terrorist organizations, according to the State Department. In 2000, after then Secretary of State Madeline Albright ended restrictions on the sale of Iranian carpets, pistachio nuts, caviar, and spare airplane parts, and apologized for U.S. misdeeds toward Tehran, Khatami responded by continuing to surreptitiously build its uranium enrichment facility in Natanz. Three years later, Khatami’s Iran – along with Syria – stood accused of flooding Iraq with al Qaeda insurgents and roadside bombs in an effort to derail the U.S. invasion and occupation.

Like Secretary Albright’s initiative, it seems that Tehran views the “first step” nuclear agreement as carte blanche, insulation against any U.S. sanction for problematic behavior on other fronts. For good reason.  The Obama administration has invested so much political and diplomatic capital on the nuclear negotiations, it’s difficult to imagine Washington risking the agreement on lower priority issues.

This dynamic likely means that America’s uneasy ally, the kingdom of Saudi Arabia, will soon become a target for Iran, because while the al Qaeda-affiliated Abdullah Azzam Brigades claimed responsibility for the Iranian embassy blast in Beirut, it is difficult to believe that Iran and Hezbollah will not retaliate against Saudi Arabia, as the chief backer of Sunni Muslims in Lebanon and the Sunni revolt in Syria. Indeed, Hezbollah officials including Secretary General Hassan Nasrallah, as well as the pro-Hezbollah Lebanese daily Al Akhbar – whose articles frequently reflect the Shiite militia’s views – have attributed the bombing to a group tied to Saudi Arabia, suggesting that the Kingdom’s embassy, diplomatic personnel, or nationals in Lebanon or abroad could be the next targets.

Should Tehran hit Riyadh, it could transform and broaden the ongoing Saudi-Iranian proxy war in Syria, Iraq, and Yemen into a more overt, deadly, and destabilizing conflict.

This isn’t the first time that Riyadh has found itself in Tehran’s crosshairs. In 2011, Iran was accused by the United States of plotting to assassinate the Saudi Ambassador to Washington. Anticipating retaliation for the Beirut attack, shortly after the bombing the Saudi Ambassador in Beirut advised the Kingdom's citizens to leave Lebanon.

Notwithstanding a marked increase in deadly Sunni-Shiite sectarian violence, to date Lebanon has avoided the worst case scenario – a resumption of civil war. In the aftermath of a car bombing earlier this year in Hezbollah’s Beirut stronghold of Dahiya, for example, in a calculated effort to avoid escalation, both Sunnis and Shiites blamed Israel for the explosion. Likewise, Lebanese Armed Forces units are currently deployed along the sectarian fault line between Sunnis and Lebanese Alawites – nominally Shiite supporters of the Assad regime – in the northern Lebanon city of Tripoli, trying to calm tensions.

But the embassy bombing and Iran’s anticipated retaliation against Saudi Arabia could threaten Lebanon’s already tenuous stability. Indeed, just two days after the attack, an Iranian-backed Iraqi Shiite militia shelled a Saudi border post as “a warning message” to Riyadh to stop “interfering” in Iraq.  Meanwhile, on the day of the Beirut blast, Hezbollah MP Ali Mikdad issued his own warning. “We got the message and we know who sent it and we know how to retaliate,” he reportedly said.

If the past is any precedent, another “message” from Tehran to Riyadh regarding Syria and Lebanon is just around the corner. Regrettably, it will likely be accompanied by a spike in sectarian violence.