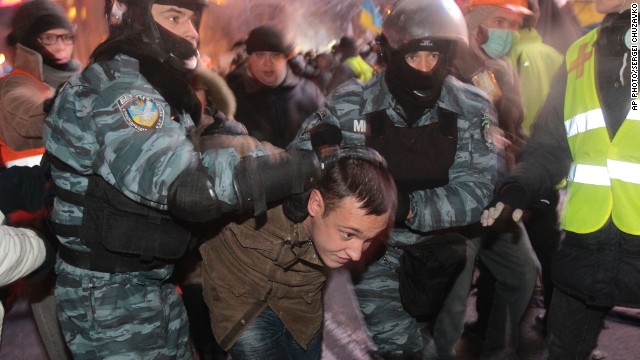 Can Ukraine halt the slide toward authoritarianism?

By Matthew Rojansky and Blair Ruble, Special to CNN

Last night’s attempt by Ukrainian security forces to clear Independence Square (the Maidan) in Kiev marks a troubling shift in Ukrainian politics. Up to now, a messy and informal dialogue had been underway among the government, activists on the street, opposition political figures, and foreign interlocutors. But the use of security forces now, even as EU foreign policy chief Catherine Ashton and U.S. Assistant Secretary of State Victoria Nuland are in the Ukrainian capital, sends a strong signal that President Viktor Yanukovych intends to resolve the current political showdown on his own terms.

The latest events have some superficial similarities to the Orange Revolution nine years ago.  Those events – which played themselves out in the very same square in downtown Kiev – appeared at the time to have consolidated a hard struggle to secure a democratic and pluralistic Ukraine.  The years since, however, have been difficult ones for the very institutions that are necessary for democracy to thrive. Nonetheless Ukrainian politicians competed in bumper car-style politics, colliding but bouncing off one another other more or less unharmed. The current escalating clashes between Yanukovych and the opposition could transform Ukrainian politics into a winner takes all demolition derby more commonly seen in Russia.

As former Ukrainian President Leonid Kuchma once famously observed, “Ukraine is not Russia.” Moreover, Ukraine has not transformed into Russia overnight.  However, last night’s display of force could signal a troubling shift towards authoritarian tactics by the state. Given the presence of senior western officials in the city, the United States can hardly ignore the actions of the Yanukovych government, and a strongly worded statement from U.S. Secretary of State John Kerry indicates Washington’s mounting outrage over the use of force against peaceful protestors.

The Yanukovych government bears much of the blame for how events have unfolded. Protests that started out peaceful were clumsily and sometimes brutally dispersed early on, fanning the flames of outrage among the opposition. Increasingly, the authorities appear to be out of touch with the majority of ordinary people. Had the state responded to these demonstrations more delicately, politics in Ukraine might have continued more or less as usual.

More from CNN: Ukraine's future is with EU

Instead, reports of cell phone blackouts and cyber attacks, raids on opposition political party offices, intimidation of journalists, and seizure of protesters traveling from outlying regions into Kiev are troubling. But they are not yet on the level of the brutal crackdown that followed similar protests in Belarus in 2010 and 2011, where phone service was completely cut and hundreds of activists were beaten or arrested, or in Russia, which has shuttered nearly all independent media, and routinely harassed opposition political leaders and NGOs.

Despite the authorities’ increased use of force following the Russian or Belarusian model, the Yanukovych government is hardly a Kremlin puppet. Yanukovych has little reason to trust Russian assurances of support during or after the confrontation with protestors, not least because Putin has previously backed Yanukovych’s rivals, including the now jailed opposition leader Yulia Tymoshenko. Nor does Russia necessarily “win” in the increasingly unlikely event that the Yanukovych government stays in power.  Whether or not it returns to the table with the European Union, Ukraine is still unlikely to sign up to the Russian-led Eurasian Customs Union, since the country’s most powerful businessmen – the oligarchs – no doubt fear exposure of their most lucrative assets to Kremlin-backed raiders.

The opposition itself is divided over fundamental principles. Some look westward to the European Union as a symbol of democratic governance, anti-corruption and pluralism, and long to preserve and advance Ukraine’s progress towards those same values.  Others are simply fed up with post-Soviet kleptocracy, disillusioned and disappointed after the failure of the Orange Revolution to produce long-term gains, and have no more faith in the nominal leaders of the opposition political parties – mostly all millionaires or billionaires – than they do in the current corrupt authorities. Finally, there is a significant right-wing nationalist component that has an agenda that explicitly identifies Ukraine as a country of and for ethnic Ukrainians, excluding not only Russians, but the traditionally maligned minorities – Jews, Muslim Tatars, Poles, Hungarians, and others.

Despite the violent turn in Ukraine it is not too late to stop a more permanent turn toward authoritarianism. The opposition protests clearly started as a call for more democratic, transparent, and accountable governance. By focusing on these themes and continuing to speak out loudly and firmly against any escalation of violence, the United States can have the best hope of positive influence on a political situation that grows more complex every day.

Topics: Russia • Ukraine
Next entry »Why Ukraine debate has Cold War echoes
« Previous entryWhich is the world's most generous nation?

Next entry »Why Ukraine debate has Cold War echoes
« Previous entryWhich is the world's most generous nation?