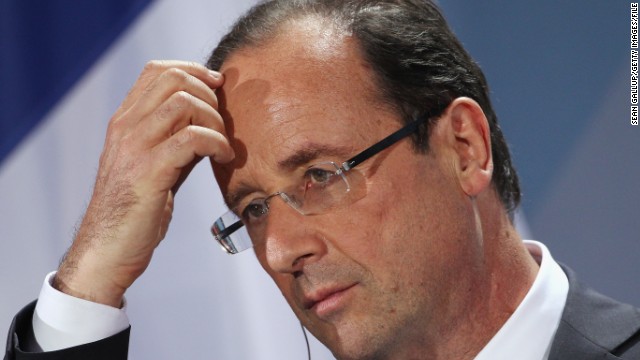 France in 2014: Another annus horribilis for Hollande?

By James Shields, Special to CNN

Editor’s note: James Shields is professor of French politics and modern history at Aston University in the U.K. He is the first winner of the American Political Science Association’s Stanley Hoffmann Award for his writing on French politics. The views expressed are his own. This is the latest in the '14 in 2014' series, looking at what the year ahead holds for key countries.

How long is France’s presidential term? Five years. How long has President François Hollande been in office? Twenty months. By the laws of simple arithmetic, that should leave him three years and four months – fully two-thirds of his mandate – to pursue his reform agenda at the head of his Socialist administration.

But presidencies don’t operate according to the laws of simple arithmetic. “Can Hollande act anymore?” asked the influential left-leaning daily Le Monde in its front-page headline of October 29. The financial daily Les Echos was more pointed still, pronouncing “The end of Hollande’s five-year term” and declaring the president to have no prospect of proceeding with further reforms.

Though his full term of office and extensive powers remain constitutionally guaranteed, there are two reasons for this rush to bring the curtain down already on Hollande’s performance. The first reason lies in the dynamics of governing within fixed terms framed by elections. As the World Bank noted in its report, Doing Business 2007 – How to Reform, nearly 85 percent of economic reforms tend to take place within the first 15 months of a new government taking office. In other words, the time to implement ambitious reforms is at the start of a government’s term while its mandate is fresh, and before re-election and the temptation to play it safe become increasingly pronounced factors in government strategy.

For his 20 months in office, Hollande has some reforms to show: the law authorizing same-sex marriage and adoption; a major stimulus package for business; a state-subsidized youth employment scheme; some modest labor market adjustments; and a limited pension reform. He has also taken what many see as a firm stand on international issues, committing troops to Mali to repel an incursion by al Qaeda-backed rebels, pushing for air strikes on Syria, and dispatching a peacekeeping force to the disintegrating Central African Republic. Though military engagements can be easier to get into than out of, decisiveness on the international stage is a quality French presidents since Charles de Gaulle generally benefit at home from exhibiting.

But – and here lies the second reason invoked for writing off the remainder of his presidency – Hollande looks already to be a fatally wounded president.

The litany of ills by which Hollande has been beset – some visited upon him, some of his own making – have rendered him the most hapless of the Fifth Republic’s seven presidents. The “normality” that was a selling point in the election has come to dog him, inviting mocking caricatures of a handyman turning up at the Elysée with his toolbox to fix France’s problems. A series of policy climbdowns (latterly the withdrawal under violent protests of an ecotax on heavy vehicles) have accentuated his image as weak and indecisive, and his clumsy intervention in a high-profile deportation case raised stark questions about his judgment.

Following a run of by-elections in which the Socialists have lost heavily, two factors now define the political mood in France. The first is a sequence of opinion polls declaring Hollande the most unpopular president of the 55–year Fifth Republic. He has some stiff competition, given the depths of unpopularity plumbed by François Mitterrand, Jacques Chirac and Nicolas Sarkozy; but with 15 percent approval in a recent YouGov poll, Hollande is in a league of his own.

The second defining factor is the sheer diversity of groups that have taken to the streets to protest – often violently – against government reforms. In recent months, lorry drivers, farmers, food industry bosses and workers, teachers, self-employed tradespeople, shopkeepers, taxi drivers, midwives, horse riders and others have mounted a cacophony of opposition. France’s top professional football clubs pulled back at the last moment from an unprecedented strike, while in Brittany a “red bonnet revolt” by tens of thousands of protesters stirred memories of an uprising in 1675 against the tax collectors of King Louis XIV.

Like that of the “bonnets rouges,” much popular anger is focused on tax rises, including a hike in VAT, hitting middle and low income households in a context of stalled growth, declining purchasing power, almost daily factory closures and rising unemployment (10.9 percent, 3.3 million, in the third quarter). The government’s strategy for reducing the budget deficit through tax rises ahead of cuts in public spending is perceived as a betrayal of Hollande’s election promises of a fairer society and an alternative to austerity economics. Being booed at an Armistice Day memorial service remains one of the more resonant images of the president in 2013.

Such is the febrile climate that prefects from the 96 metropolitan departments – the Paris government’s sentinels on the watchtowers across France since Napoleonic times – submitted a confidential report to the Interior Ministry in October warning of “dangerous” levels of “tension, exasperation and anger.” “Throughout the country,” they reported, “a sense of despondency” and “latent discontent” was “erupting in a series of sudden angry outbursts.” The very spontaneity of these collective outbursts of anger was intensifying their radicalism and pushing France closer to a “potential social explosion.”

All of this should play to the advantage of the center-right UMP opposition, but it hasn’t. After a bitter and inconclusive leadership contest in 2012, the UMP remains riven by personal, ideological and strategic divisions. The party that looks best placed to derive unqualified benefit from the Hollande administration’s woes is the far-right Front National, rejuvenated under its new leader Marine Le Pen.

So let us hazard a few predictions for the year ahead. Hollande’s poll ratings will not see any significant recovery, and may yet sink further as taxes, spending cuts and other unpopular measures take effect. Nor will the UMP profit greatly from the Socialists’ difficulties; after ten years in power (2002-2012), it is still too early for Sarkozy’s old party to effect a providential return to public affection. But Sarkozy himself will continue to float the prospect of his own providential return to oust Hollande in 2017.

The Socialists and the UMP, for all their problems, will once again sweep the vast majority of the half million seats at stake in the municipal elections of March. And the Front National? The FN will overcome voting system bias to win a substantial number of council seats and some mayors in the municipal elections, and may even for the first time top the poll in the European elections. It will take votes from right and left, continuing to extend beyond its urban areas of strength into peri-urban towns and villages across the north and south-east especially. It will be, in its upward dynamic, the party of 2014 in France.

Meanwhile, President Hollande has pledged to reverse unemployment by the year’s end and to reduce the budget deficit from 4.1 percent to 3.6 percent of GDP in 2014. It will require an abrupt upturn in economic conditions, or a feat of creative accounting, to sustainably achieve either.

To be disliked in politics is damaging; to be discounted is fatal. Hollande entered 2013 as leader of a country which, for CNN Money’s senior editor-at-large, was “heading towards an economic Bastille.” At the mid-point of the year, a respected view from across the Rhine was that France was facing “the biggest crisis of the Fifth Republic.”Hollande has been categorically dismissed as the man to solve this crisis. He enters 2014 as a serving president whose presidency, for many, is already behind him.