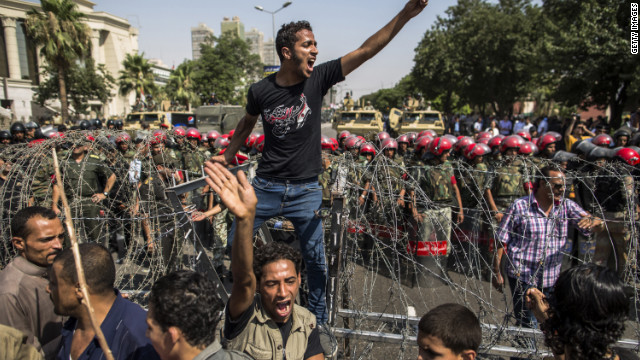 Egypt in 2014: More demonstrations to come

Editor’s note: Steven A. Cook is the Hasib J. Sabbagh senior fellow for Middle Eastern Studies at the Council on Foreign Relations and the author of The Struggle for Egypt: From Nasser to Tahrir Square. The views expressed are the writers’ own. This is the latest in the '14 in 2014' series, looking at what the year ahead holds for key countries.

Egypt hasn’t made international headlines for a while, but Egyptians themselves have still been making news. The crackdown on the Muslim Brotherhood that began after a coup toppled embattled President Mohammed Morsy in July has extended through the end of 2013, and will likely continue. At the same time, a low-level insurgency in the Sinai Peninsula has occasionally reached into major cities like Ismailiyya and Cairo. The government’s approach to the violence seems to be based solely around bringing as much firepower to bear on the perpetrators as possible. But while there might be some success in killing some terrorists and criminals, the complexity of the situation on the ground means this strategy will likely do little to change an environment where extremist elements thrive.

Beyond the security situation, Egyptian politics are likely to remain fraught. After the coup, the military-backed interim government issued a roadmap for the restoration of democracy. Never mind the fact that there was no democracy to restore – Egyptian officials have been faithful to the transition they set up after the military’s July intervention. Since interim President Adly Mansour accepted constitutional revisions that first a committee of ten legal experts, and then a broader group of fifty, debated and further refined, the constitution will be put to a referendum on January 14 and 15. The roadmap calls for parliamentary elections within 15 days of the draft document’s passage, and then finally presidential elections within one week of the parliament’s first session. Mansour is currently studying the idea of flipping presidential and parliamentary elections. Regardless of what he decides, Egyptians will carry out the remaining aspects of the roadmap relatively problem free, but this does little to resolve three core issues that will destabilize Egyptian politics in 2014.

First, the crackdown on the Muslim Brotherhood is likely to have ongoing and serious consequences for Egypt. Egyptians have largely come to detest the Brothers – a sentiment that the state-run media and a variety of private, but anti-Brotherhood outlets have reinforced – but they do retain a significant core following, some of whom have become radicalized as a result of the coup. For the Brotherhood, the coup was an illegitimate act that undermined a democratically elected leader, adding to the organization’s already well-developed narrative of victimhood.

The interim government meanwhile maintains that the military’s intervention was a reflection of the people’s will at a time when Morsy was bringing ruin to the country. In addition, according to officials, the Brothers are tied to terrorist groups that are wreaking havoc in the Sinai and elsewhere. Although some analysts expect a deal between the officers and the Brothers, both sides derive political benefit from these widely divergent accounts of Morsy’s year in office, raising the prospect for continued contestation, protest, and violence.

Second, despite the fact that Saudi Arabia, the United Arab Emirates, and Kuwait have floated the Egyptian economy, relieving some of the most significant economic challenges of the last three years, Gulf largesse only gives Cairo some breathing space. Tourists – who contributed $12.5 billion to the economy in 2010 – are avoiding popular destinations in the Nile Valley for fear of being caught in the middle of a spasm of protest and violence. Likewise, foreign direct investment, which helped drive GDP growth in the last years of Mubarak’s rule, has declined since 2011. The only two bright spots are remittances from Egyptians working abroad and revenues from Suez Canal tolls, both of which are up in the last three years. Taken together with the aid from Gulf countries, this revenue does little to address Egypt’s underlying economic problems.

Egyptian policymakers are caught between the need for reform and fear of the political reaction to modification of, for example, the system of subsidies that distorts the economy, but keeps the prices for energy and certain food products low. The demonstrations that ended Hosni Mubarak’s long rule were not at a basic level about the economy, but Egyptians have been expecting better economic times ever since. Opposition to Morsy was also rooted in political disaffection, but it is important not to overlook that his presidency coincided with Egypt’s near economic collapse. If Egyptians do not perceive improved economic prospects relatively soon, instability is likely to continue.

Finally, although Egyptian officials are adamant that they are presiding over a transition to democracy, what is actually happening in Egypt suggests something much different. The interim president recently signed into a law a measure that severely restricts the ability of people to protest. Under the new draft constitution civilians would be subject to trial in military courts for a variety of offenses that are open to broad interpretation, and the same document places the military as well as the police forces beyond the bounds of civilian control. The police have taken on street protests and student demonstrations with a renewed brutality, recognizing that anti-Muslim Brotherhood sentiment affords the Ministry of Interior a certain amount of political cover it never previously enjoyed.

Overall, Egypt’s new government, in cooperation with a willing media, have created an environment that dampens public debate with an onslaught of imagery and commentary that places Major-General al Sisi, the coup he oversaw, and military operations in the Sinai beyond reproach. Rather than democracy, Egypt’s leaders are presiding over a political system that more closely resembles the old, authoritarian political order. Presently, Egyptian democracy advocates, liberals, revolutionaries, and other activists – many of whom welcomed the military’s intervention – are powerless to prevent this development, but they have been remarkably resilient in doing what they seem to do best, fostering public discontent. Expect that demonstrations both large and small will continue into 2014 and beyond.

Topics: 14 in 2014 • Egypt
Next entry »Afghanistan in 2014: Importance to stretch well past borders
« Previous entryFrance in 2014: Another annus horribilis for Hollande?

Next entry »Afghanistan in 2014: Importance to stretch well past borders
« Previous entryFrance in 2014: Another annus horribilis for Hollande?