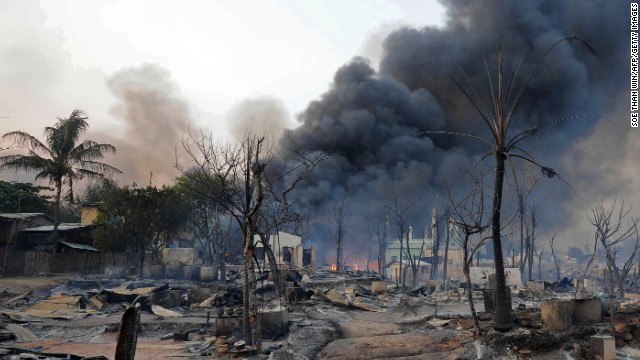 Four stories you may have missed in 2013

By Greg Scoblete and Kevin Sullivan, Special to CNN

Editor’s note: Greg Scoblete and Kevin Sullivan are the editors of RealClearWorld, which recently named GPS one of the top 5 international news analysis sites of 2013. The views expressed are their own.

There was no shortage of eye-grabbing global headlines in 2013. The Catholic Church chose a new Pope. China and Russia flexed their muscles. The U.S. and Iran, meanwhile, took a step back from the brink of what looked like a potentially explosive confrontation. But while these stories commanded an ample share of media attention, we’ve found four significant stories that may have slipped under your radar.

With Southern Europe still reeling and the anemic U.S. recovery wobbling along, good economic news has been in short supply. But if you widened the lens, 2013 actually delivered some encouraging, indeed historic, news. It came in the form of a study from Oxford University’s Poverty and Human Development Initiative that concluded that developing countries were enjoying remarkable success in alleviating the worst poverty. They’ve had so much success, in fact, that Oxford predicted that crushing poverty in many of the least developed countries in the world (think Bangladesh, Rwanda, Nepal) is actually on track to be fully eradicated within 20 years.

This optimism was echoed by the United Nations’ 2013 Human Development Report, which noted that “[n]ever in history have the living conditions and prospects of so many people changed so dramatically and so fast.”

How did the worst-of-the-worst manage this economic turnaround? Growth naturally played a huge role. While advanced economies are languishing with a meager 1.2 percent annual economic growth rate, the International Monetary Fund expects the developing world to hum along at 4.5 percent this year. Oxford and the United Nations also found that a combination of a doubling of aid since 2000, an increased participation of poor states in global trade and a strong state focus on health and education have all contributed to this historic transformation.

Japanese Prime Minister Shinzo Abe has captured the world’s attention with his package of ambitious reforms (dubbed “Abenomics”). Far less attention has been paid to the equally ambitious agenda of Mexican President Enrique Pena Nieto. Since being elected in 2012, Pena Nieto has championed arguably the most aggressive Mexican reform program in decades.

Taking on some of Mexico’s most cherished and entrenched interests, Nieto has successfully passed several pieces of groundbreaking legislation this year on education, telecommunications, fiscal reform and – arguably the crown jewel of the president’s agenda – a massive energy sector deregulation that will break apart a 75-year state oil monopoly and potentially flood the country with billions in investment dollars.

The challenge to Mexico’s state-owned petroleum company, Pemex, is an especially ambitious feat with global implications, explains the Hudson Institute’s Jaime Daremblum. “Until now, Mexico has been unable to access a sizable portion of its massive oil and gas reserves because of insufficient investment and inadequate technology,” says Daremblum. “With a surge of private investment and drilling assistance from foreign multinationals, the country can finally reach its full potential as an energy producer.”

When the Western world hears about sectarian violence, they can be forgiven if their minds usually flash to the Sunni vs. Shiite carnage in the Middle East or the persecution of minority Christian communities in countries like Egypt. What they’re not likely to think of are murderous, machete-wielding Buddhists setting fire to Muslim villages. But that’s just what happened in Myanmar this year.

This was to be a year when Myanmar’s nascent political reforms would be solidified. Yet rather than usher in a period of peace and economic development, the loosening of authoritarian controls roiled sectarian tensions and unleashed a murderous wave of Buddhist violence that threatens to derail Myanmar’s democratic progress. The violence is being fueled by ultra-nationalists Buddhists (including radical monks) who, according to the International Crisis Group, are now flourishing as state controls on the media are lifted. The situation is so grave that Tom Andrews of United to End Genocide warned in congressional hearings earlier this year that "the building blocks of genocide are in place" if nothing changes.

Worryingly, the violence is leaking out of Myanmar’s borders, argued Joshua Kurlantzick, a senior fellow for Southeast Asia at the Council on Foreign Relations. Radical Muslims in Indonesia have responded to Buddhist attacks on their co-religionists by attempting to bomb a prominent Buddhist temple and the Myanmar embassy in Jakarta. Violence has spilled into Malaysia as well, as several Buddhists were murdered there in violence linked to rising tensions in Myanmar. Left to fester, Kurlantzick warned that: “continuing instability also breeds serious, nontraditional security threats, including narcotics production, massive refugee flows, and the possibility of terrorist groups using the country's lawless environment to build networks across Southeast Asia.”

Though the guns officially went silent in the Democratic Republic of Congo’s civil war back in 2003, the uneasy peace administered by several African nations left dozens of rebel groups and violent separatists vying for control of the country’s territory and bountiful resources. Since then, the DRC has been plagued by a variety of regional conflicts and uprisings. Among the region’s more organized – and violent – militias was the March 23 Movement (M23), the armed offshoot of a separatist political party based in the Kivu region of eastern Congo. For over a year, the rebel group terrorized eastern Congo, with its crowning achievement being the 11-day seizure and occupation of the provincial capital of Goma during the fall of 2012.

Yet rather than sink back into a violent abyss, Congo took a hopeful turn in 2013 when several African leaders met alongside U.N. officials in Nairobi to hammer out a framework for addressing the chaos. The plan promised a revamped and more aggressive U.N. peacekeeping force to work alongside the Congolese army in its efforts to root out and rein in separatist groups.

The plan appears to have worked, as a campaign spearheaded in late August by the combined forces repelled and ultimately pushed M23 rebels to the negotiating table. The peace, should it hold, is not only a big victory for the Congolese military, but for U.N. Secretary General Ban Ki-moon, who took a special interest in quelling the carnage in eastern Congo.

Though the defeat of the M23 is an undeniable accomplishment for Kinshasa, many obstacles remain. Among them, says Christoph Vogel, a researcher who monitors DRC militias, are the many other militias operating around the country. To subdue these groups, a more holistic approach – one that addresses longstanding land disputes and distribution – may be necessary. Otherwise, lingering grievances will only lead to later clashes between militants fighting under new flags and acronyms.

“M23 was a very conventional opponent,” explains Vogel. “Other groups will be harder to tackle; their guerilla-like outfit will lead them to tactically disperse instead of facing proper battlefield confrontation.”

Topics: Africa • Foreign Policy • Myanmar
Next entry »3 years on, should we be depressed about the 'Arab Spring'?
« Previous entryWhat Indians really want from their government

Next entry »3 years on, should we be depressed about the 'Arab Spring'?
« Previous entryWhat Indians really want from their government