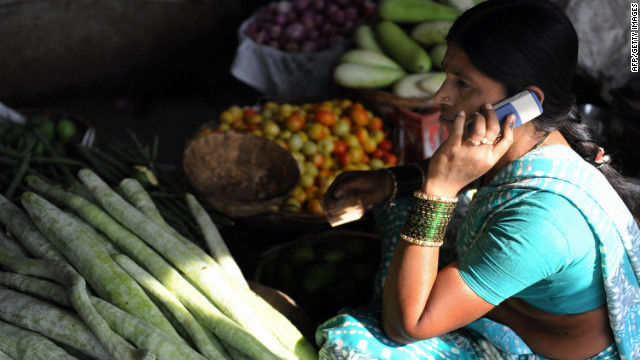 How India can leapfrog to the future

By Barnik Maitra and Adil Zainulbhai, Special to CNN

In a village 100 miles from any cities in Andhra Pradesh, a young woman, three months pregnant, is getting her first and only medical check-up. This is happening on board a visiting medical van that now comes to the village every month. The paramedic gives her basic vitamins and enters various vital parameters into an online data base.  Two weeks later, when she feels a little unwell, she calls a toll-free number from her family’s mobile phone, connects a $1 monitor to it, and talks to a doctor. He studies her vital signs through the monitor and reassures her that everything is fine this time. Five months and five such virtual check-ups later, it is time for her to go to the hospital. The online doctor sends her an ambulance, which drops her 90 miles away at the nearest hospital, for a safe delivery.

Thousands of mothers in Andhra Pradesh and around India are benefiting from the frugal technologies of wireless connectivity, sensors, software, and having a safer childbirth.

The combination of cheaper devices, easy connectivity and the high aspirations of the population could help India leapfrog development in several areas. Broadband internet can transform primary and secondary schooling by bringing the best teachers and techniques into every classroom. In Reimagining India: Unlocking the Potential of Asia's Next Superpower, edited by McKinsey & Company, digital educators Salman Khan and Shantanu Sinha argue that “replicating for hundreds of millions of aspiring learners what a few thousand previously experienced in the lecture halls of Harvard, MIT or Stanford would require an absurdly large investment. But now, this information is available to anyone with a cheap laptop and a broadband connection.” Indeed, today, Indian students are the largest users of massive open online courses from MIT and Harvard.

Healthcare offers similar possibilities. Cheap devices (GE’s X-ray costs $50), sensors and broadband connectivity will open up access to healthcare, and at lower costs than the standard brick and mortar solutions (often at a fiftieth of the comparable U.S. cost). Swasthya Slate (a tablet device for patients to perform self-diagnostic tests including electrocardiograms, blood sugar, blood pressure, and heart rate readings) and “m-steth” (mobile stethoscope to transmit heart data) are smart, affordable substitutes for over half of all doctor visits. This is life-changing in a country like India, where the doctor to patient ratio is a meager 1:1,700 (compared with 1:400 in the United States).

A better future awaits India in areas like energy and infrastructure as well. In Reimagining India, venture capitalist Vinod Khosla argues that rather than building more highways to accommodate more cars (like the developed countries), India could think about the best transportation system for self-driving (or driverless) vehicles. Schneider Electric’s President and CEO, Jean-Pascal Tricoire hopes that India will seize the golden opportunity to create an intelligent electrical grid that relies on more end-use efficiency and renewables, effectively leapfrogging conventional energy systems and becoming self-sufficient without incurring all the costs and collateral damage of the traditional model.

Ram, a villager from the state of Uttar Pradesh, had no national identity papers, and so could not access government benefits when he migrated to Delhi as a construction worker. Through the Unique Identity Card program (UID Aadhar) Ram can now receive government benefits directly in his bank account, which is linked to his UID number. New technologies for biometric information ($10 retinal scanners), new database technologies, and new software made it possible to roll out Aadhar to 400 million Indians in record time – at a tenth of the cost in developed countries, and in one-fifth the time. If successful, Aadhar can fundamentally change the delivery of government services for 1.2 billion people. For example, if food subsidies went directly to recipients (as cash or vouchers), instead of distribution through “fair-price” shops, half the current outlay could feed all of India’s poor.

The same breakthrough is possible in access to all government services, retail services, banking and financial inclusion, agriculture, medical care, education at all levels and in many other fields that we haven’t even thought of yet, and may help India to drive faster inclusive development for its population. In true Indian tradition, the potential for technology to leapfrog is enormous – and so are the barriers. As experience shows, progress may be fitful, but when India can imagine, mobilize, and leapfrog, ten years can change almost anything.