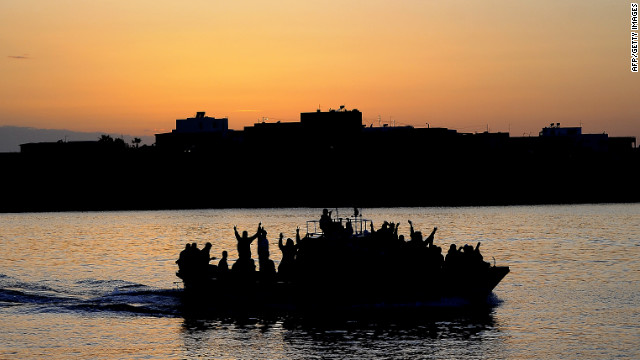 By Kevin Duffy, Special to CNN

Editor’s note: Kevin Duffy is a Lieutenant Commander in the U.S. Coast Guard and a member of the Atlantic Council’s Young Atlanticist Working Group. The views expressed are his own and do not necessarily reflect those of the U.S. government.

At the conclusion of a summit of European leaders earlier this month, European Commission President José Manuel Barroso called the plight of migrants crossing the Mediterranean an “urgent and complex situation.” He went on to say that the European Union planned to address that situation through a 50-million euro emergency fund, an effort to work with countries of origin in the Middle East and Africa in addressing the causes of migrant flows at their source, increased security patrols, and a comprehensive migrant resettlement policy.

Europe’s policymakers appear now to be recognizing just how much the solution to the “urgent and complex” migrant situation will require a coordinated international effort, rather than reliance on individual countries to respond on their own.

In explaining the urgent tone of his remarks, President Barroso directly referenced Lampedusa, a rocky outcrop that is much closer to North Africa than it is to mainland Italy. The waters around that island were the scene of repeated, massive maritime disasters and rescue efforts in October: on the third of that month, more than 350 people died in a single shipwreck, with 150 more being rescued; a week later, more than 30 people perished and over 200 were saved when their boat capsized; on October 17, a U.S. Navy ship picked up over 120 imperiled migrants; in a remarkable single night at the end of the month, Italian and Maltese boats saved 700 people from five separate vessels.

In all of these cases, those in peril were African and Middle Eastern migrants, fleeing to Europe on vessels of questionable seaworthiness in order to escape the dangers of their respective homelands. As in every case of migrants in danger at sea, any conversation about these events confronts us with a number of issues, from sometimes unimaginable human suffering on foreign shores, to the political and moral implications of immigration law, to the challenges and obligations of monitoring territorial seas and international waters.

But the phenomenon of Lampedusa did not suddenly emerge in October – in July, Pope Francis travelled there for his first trip outside of Rome as Pontiff, calling migrant deaths “a thorn in the heart.” Indeed, the Italian island has for years been a favored destination for migrants fleeing from the shores of North Africa.

The decision of those migrants to make a treacherous ocean crossing to a new land, rather than endure present circumstances at home, has been a consistent one across continents and centuries. The east coast of the United States is dotted with wrecks of the many “coffin ships” that failed to get 19th century European emigrants the final few miles to safe American harbors. In the 1970’s, hundreds of thousands of Vietnamese fled via sea after the fall of Saigon (1975) and conflict with China (1979). This September, the government of Australia initiated a special task force to deal with unauthorized maritime immigration.

The recent cases near Lampedusa are therefore simply the latest manifestation of a long-enduring global trend. And in each of these cases, the immigrants attempting to reach safer shores have been the subject of intense debate – immigration policy is as divisive an issue in Australia as it is in the EU and United States. It is likely to remain so: because immigration is largely motivated by economics, the needs and desires of people to immigrate, and for governments to accept them, will always be in flux.

But even where there is sympathy for the migrants’ plight, and where the political will is clear and strong, the task of keeping migrants safe from the perils of the sea is a daunting one.

Vast swaths of ocean can be variously monitored by ships, emergency beacon networks, and maritime patrol flights, but there are myriad challenges to maintaining constant watch over every square mile of the sea, and especially to locating small, overcrowded vessels without radios, signal beacons, or navigational lights.

Successes are possible, as in the United States’ remarkably effective response during the Mariel Boatlift in 1980, when about 120,000 Cuban migrants made the maritime transit to Florida over the course of six months, with fewer than 30 recorded deaths at sea. In that case, however, the Americans knew both the dates and the place of departure of the migrants (Fidel Castro had announced the authorized departure dates from the port of Mariel). In addition, due to immigration policies in the United States, it was clear that the refugees would be accepted in their destination country.

In the case of Lampedusa, nothing is so sure: migrant crossings are frequent but unconnected events, there are several ports of departure, and an integrated EU immigration policy is a work in progress. In reality, Italy and the broader EU face tough challenges in preventing losses of life in the waters around Lampedusa, just as they face complex political issues in deciding how to deal with the influx of people who do make it to shore.

We would do well to keep both of these challenges in mind when discussing Lampedusa. We should not, however, allow such difficulties to dampen our resolve; responsible nations are obligated to work together, both to pursue the appropriate and mutually agreeable policies, and to effectively monitor and patrol the sea. President Barroso’s words at the end of this month’s summit were a welcome signal of the collective European intention to do exactly those things.

The world should watch closely, for even if no one ever again dies in an effort to cross the sea to Lampedusa, we can be sure that the recent story of that island, and of those seeking safe harbor there, will eventually be repeated somewhere else in the world.

Topics: Europe • Immigration
Next entry »Brazil in 2014: Will Rousseff change course?
« Previous entryHow India can leapfrog to the future

Next entry »Brazil in 2014: Will Rousseff change course?
« Previous entryHow India can leapfrog to the future