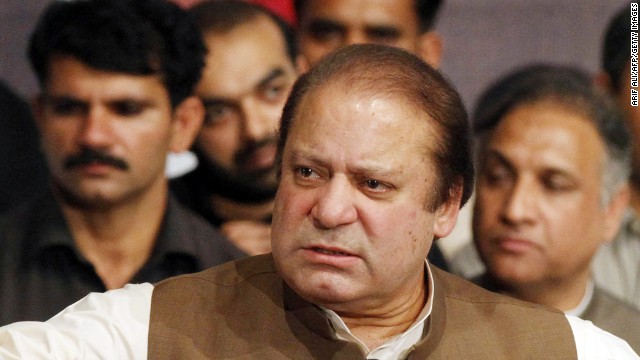 Pakistan in 2014: Time ripe for a virtuous cycle?

Editor’s note: Robert D. Lamb is senior fellow and director of the Program on Crisis, Conflict, and Cooperation at the Center for Strategic and International Studies in Washington, D.C. The views expressed are solely those of the author. This is the latest in the '14 in 2014' series, looking at what the year ahead holds for key countries.

But they also reaffirmed the importance of the partnership, given their shared concern over the very real threats to Pakistan’s stability: armed militants attacking Pakistani state targets, sectarian and political violence increasing intercommunal tensions, terrorist groups threatening India with cross-border attacks and increasing on-again-off-again tensions with its larger neighbor, and devastating energy and economic crises that keep tens of millions of Pakistanis in poverty and threaten Pakistan’s social cohesion. Pakistan is a country that is too big to fail: its population is large, it has nuclear weapons, and its extremist groups have international connections. Instability there would affect too many international security concerns to ignore.

These threats are not going away any time soon. The next 12 months will be a critical period as the United States will withdraw most (and potentially all) of its troops from Afghanistan by the end of 2014. That drawdown will have significant – and unpredictable – effects within Pakistan and on the U.S.-Pakistan relationship. The challenge will be to get beyond the frustrations and disagreements and find ways to cooperate as the opportunities to do so arise.

The good news is that opportunities do exist beyond security cooperation. Leaders of both countries would do well to pursue policies and investments that can start to reverse the economic crisis and build relationships giving more people a stake in stability.

The drawdown of international troops from Afghanistan will have three key effects on Pakistan. First, funds related to the use of transit routes through Pakistan into Afghanistan will decline, affecting income for Pakistani transportation companies, as well as fees that help the government’s budget. Pakistan’s economy is already in crisis and in need of a cash infusion; removing millions of dollars from the economy can only hurt, and the United States has already frozen significant amounts of military aid (a policy that is reversible).

Second, the nature of the conflict in Afghanistan will change as Afghan troops lose international support for their battles against militants. How that conflict changes cannot be predicted. If fighting gets worse, violence could spill across the permeable border. But if somehow the conflict settles down, battle-tested fighters without a job could become recruits in Pakistan. Either way, there is a real risk that Pakistan’s military will face an increase in threats on its own territory during a time when it already is stretched thin fighting internal adversaries.

Third, once international forces are largely gone from the region, international concern over Afghanistan (and the aid accompanying that concern) will inevitably start to shift toward other priorities. And there are fewer international priorities in the region higher than Pakistan’s stability.

While the economic and security effects of the drawdown will pose real challenges to Pakistan, the shift in attention away from Afghanistan could actually accrue to Pakistan’s benefit. The United States and European countries will need to be convinced that Pakistan’s new leaders are committed to rooting out state support for militants groups and to making hard decisions needed to bolster its own economy, including unpopular conditions the International Monetary Fund requires for future financing and addressing some of the privileges Pakistan’s wealthy families and top military officials enjoy at the rest of the country’s expense. And disagreements over reimbursements by the United States to Pakistan’s military for counterterrorism expenses will need to be addressed, among other issues.

But the increased attention that is likely to be paid to Pakistan over the next year should focus on three key issues. First is the Pakistan military’s evolving doctrines on counterterrorism and nuclear weapons. Counterterrorism doctrine has generally been shifting in a productive direction, such that more and more military officials consider internal militancy to be at least as great a threat to Pakistan as India. This should be encouraged and supported. Nuclear doctrine is more problematic as it has increasingly emphasized tactical weapons, considered more “usable” in the battlefield. That is one of the most important issues to watch for in 2014.

Second is the energy crisis. Energy shortages and blackouts are creating widespread discontent and are holding back Pakistan’s economic development. Pakistan and Iran have agreed to build a natural gas pipeline, but progress has been caught up in international sanctions against Iran. With a six-month agreement to lift some sanctions from Iran, there might be room in the next year for the pipeline to proceed and take some pressure off Pakistan’s energy crisis.

Finally, Pakistan’s economic crisis has many roots and no easy solutions. But investors have begun to recognize real opportunities. Despite Pakistan’s economic crisis, domestic consumer demand has been rising since 2007. Important multinational corporations have outperformed in Pakistan compared to their global averages. Pakistan’s top domestic companies have enjoyed 35 percent annual growth, while small and medium-sized enterprises have significantly lower borrowing rates than in other countries in the region. Pakistani markets have more diversification potential than even African markets. Most importantly, Pakistan’s young demographic suggests that, if the jobs crisis were resolved, its economic growth could outpace that of many other countries.

In short, Pakistan’s economy has the potential for a real virtuous cycle. Whether 2014 is the year policymakers and investors can get that cycle starting is worth watching.

Topics: 14 in 2014 • Pakistan
Next entry »Putin’s amnesty is an opening for the West
« Previous entry2014 is a make or break year for China