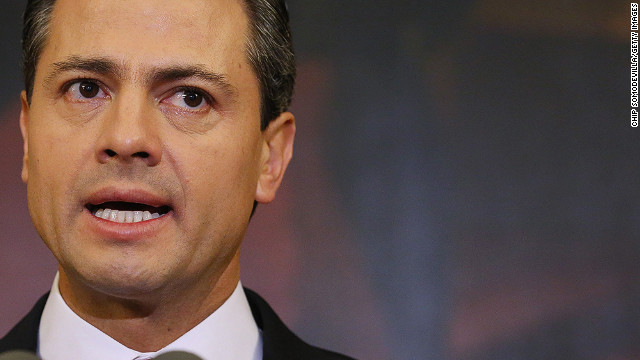 By Duncan Wood, Special to CNN

Editor’s note: Duncan Wood is the director of the Mexico Institute at the Woodrow Wilson International Center for Scholars. The views expressed are his own. This is the latest in the '14 in 2014' series, looking at what the year ahead holds for key countries.

Last year will go down as an extraordinary, historic year in Mexico. A number of structural and political reforms that had been pending for 15 years were approved by the country’s Congress addressing education, labor markets, telecoms competition, financial regulation, fiscal affairs, elections rules and energy. The government of Enrique Peña Nieto remained the darling of international investors throughout the year, and received record levels of foreign direct investment in the first year of its mandate, by following through on his promised reform agenda and delivering the legislation needed to prepare Mexico for a more competitive global economic environment. His ruling PRI (Revolutionary Institutional Party) showed coherence and unity throughout the year, and the other major parties agreed to work closely with the PRI to secure legislative progress.

The crowning achievement of the year was the energy reform bill that was approved by the Congress on December 15. By opening up Mexico’s hydrocarbons sector to foreign investment for the first time since the 1930s, the reform not only marks a paradigm shift in Mexican thinking about oil and gas, but offers the very real prospect that major investment will result in rising production, strengthened reserves and the direct and indirect creation of hundreds of thousands of high quality jobs for Mexican citizens.

However, although the Mexican government retains its positive image in the international arena, at home the president’s popularity has undergone a major decline. Peña Nieto currently commands the approval of only 44 percent of the Mexican population, according to one recent poll, an incredibly low level by Mexican presidential standards.

The reasons for this are multiple: disappointing economic growth figures that have inspired low consumer confidence, a public security and violence problem associated with organized crime that refuses to go away despite the government’s repeated attempt to distract public attention from it, and a fiscal reform process that resulted in the alienation of the crucial middle class support that was so important in getting the PRI and Peña Nieto elected in July 2012. The government is therefore looking for ways to strengthen its public image during 2014, and hopes to see higher rates of economic growth and increased success in its struggle to improve the rule of law.

More from GPS: Misconceptions about Mexico

In order to achieve both of these goals, the government must not rest on its laurels of successful reform because although the major legislative changes that were approved by the Congress do indeed mark an impressive change, they will count for little if the government fails to enact secondary legislation that allows for the implementation of the spirit and letter of the reform in the real world of policy. What’s more, once secondary legislation is passed, the government must find the political will to implement it, often running counter to deeply embedded interest groups.

Thus far, however, the government’s record on this front is not encouraging. The education reform that was approved early last year was followed by timid secondary laws and the government shows little enthusiasm for taking on the national teachers’ union in the implementation phase. Peña Nieto cannot make the same mistake with the energy reform. The passing of a bold reform in December will mean little if it is not followed by secondary laws that create a strong legal and regulatory framework, along with sound and autonomous institutions, to enhance investor confidence. Big and small oil and gas companies alike are waiting to see exactly what the government is going to do to create a level and fair playing field in the sector in Mexico, and to allow them to maximize the profits from their participation.

While energy is the most important of the reforms, the government must follow through on all of its economic reforms if it is secure its goal of raising economic growth to the 4 percent of GDP per year rate that it has promised. In 2013, that rate was only set to reach 1 percent, and this may prove to be the most important factor in pushing the government to continue the reform process.

Mexico will hold mid-term elections in 2015, and if the economy continues to mew timidly rather than roar as was expected, the PRI will be severely punished in the polls, weakening the party’s position ahead of the next Presidential election in 2018. On the other hand, stronger economic growth, if it is combined with an improving public perception of the state of public security, could propel the PRI to a solid performance in 2015, paving the way for another presidential victory in 2018. Disappointing growth over the past 12 months should convince the government that it must enact effective secondary laws, and that it must dedicate both resources and political capital to their implementation.

All this suggests that 2014 will be another pivotal year for Mexico and for President Peña Nieto. Mexico’s “moment” has never really materialized, but that may be a good thing; laying solid foundations for long term economic growth is surely far more important than a short-lived economic boom, and it will be the nitty gritty of secondary laws that can make that future possible.

Topics: 14 in 2014 • Mexico
Next entry »On GPS Sunday: What will 2014 bring? Plus, Bono and Elon Musk on creativity
« Previous entryWorld still downbeat on economic prospects

Next entry »On GPS Sunday: What will 2014 bring? Plus, Bono and Elon Musk on creativity
« Previous entryWorld still downbeat on economic prospects