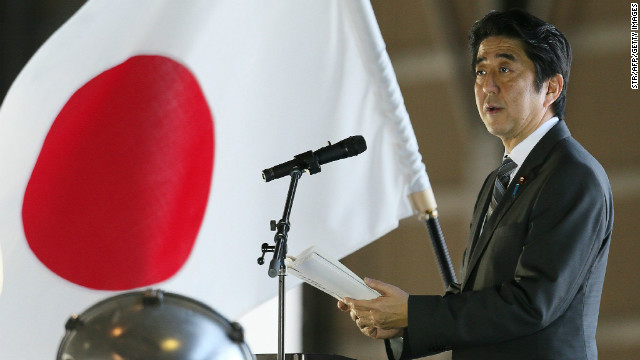 By Shihoko Goto, Special to CNN

Editor’s note: Shihoko Goto is the Northeast Asia associate for the Woodrow Wilson International Center for Scholars’ Asia Program based in Washington DC. The views expressed are the writer’s own. This is the last in the '14 in 2014' series, looking at what the year ahead holds for key countries

Will Japan assert its own vision for East Asia, or will it continue simply to react to China? That will be the biggest question in 2014 for Tokyo as tensions with Beijing continue to mount.

Japanese Prime Minister Shinzo Abe’s decision to beef up military spending and enhance its longer-term security is a game-changer for the region, and while there is a chance the move will strengthen bilateral relations between Japan and the United States, it is unclear how this will impact Tokyo’s relations with Beijing. Whatever happens, though, there can be little doubt that tensions over the disputed islands in the East China Sea will remain in the headlines this year – and the reality is that there is no easy solution to the dispute over who owns what Japan calls the Senkakus and China the Diaoyu Islands.

Tokyo’s decision last month to increase military expenditure to $239 billion over the next five years, coupled with a new 10-year national security strategy, was the clearest sign yet that Japan is serious about strengthening its defense capabilities against a backdrop of China’s surging economic and military power.

Described by Abe as “proactive pacifism,” Japan’s latest defense plan focuses on enhancing the country’s maritime capabilities, including by increasing the number of destroyers by seven to 54. Six new submarines are also to be added to the existing 16, as well as 20 fighter jets, a move that will clearly enhance the country’s ability to assert itself in contentious regional waters.

Why would Japan feel the need to bolster its capabilities despite currently being constitutionally bound not to possess an offensive military capability? The answer likely lays largely with China’s consistent double-digit investment in its military capacity, combined with a growing willingness to flex its growing muscle.

Certainly, Beijing’s announcement of an air defense identification zone (ADIZ) over the East China Sea, a move widely seen as an attempt to boost its claims to the disputed islands, will only have increased the sense in Tokyo that it needs to be better able to respond in the event that tensions boil over. And with leading ally the U.S. increasingly looking to trim its budget even as it tries a strategic rebalance toward the Asia-Pacific, Japan is keen to demonstrate that it is willing and able to pull its weight.

The problem is that although Washington might welcome an increased Japanese ability to shoulder greater responsibility for its own security, and U.S. policymakers value the longstanding security pact with Japan, Washington has made it clear that it also wants stable relations with Beijing. This was underscored by Vice President Joe Biden’s more than five-hour meeting with Chinese Premier Xi Jinping as part of his East Asia tour in early December, the kind of dialogue that stands in sharp contrast with the fact that  Abe hasn’t even held a bilateral meeting with his Chinese counterpart.

Of course, the tensions between China and Japan pre-date this year’s verbal volleys over the disputed islands – there are longstanding and deeply emotional reasons why relations are so frosty. For a start, in arguing for ownership of the East China Sea islands, Beijing argues that the treaties allocating the territories were drafted and approved by the allied powers post-World War II without any input from China. And both Beijing and Seoul continue to claim that Tokyo has failed to properly apologize for Japanese aggression during wartime occupation, as well as for forcing women into prostitution during the conflict. Indeed, it is the objections over Japan’s handling of the sex slave or comfort women issue is one of the key reasons why Abe has yet to hold formal bilateral meetings with South Korean President Park Geun-Hye.

For now, geopolitical tensions have only had a limited impact on financial markets in the region. Yet a further escalation of tensions could not only affect bilateral trade between the three countries, but could undermine confidence in the region more broadly. This is the last thing that Japan needs as it tries to recover from two decades of economic stagnation.

Throw into the mix the looming security challenge of handling an erratic neighbor in the shape of North Korea, and the need for positive leadership from the Abe administration is clear. Whether Japan can rise to these challenges – and prevent events spiraling out of control and into conflict – will not only define Tokyo’s standing in 2014, but its future in years to come.