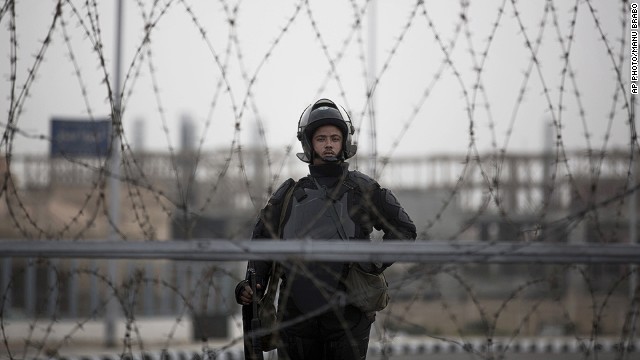 The War on Terror’s authoritarian template

By Sahar Aziz, Special to CNN

Editor’s note: Sahar Aziz is associate professor at Texas A&M University School of Law where she teaches national security, civil rights, and Middle East law. She serves as president of the Egyptian American Rule of Law Association and is a fellow at the Institute for Social Policy and Understanding. The views expressed are her own.

Egyptian society, once teeming with calls for freedom, justice and dignity, has been replaced with an atmosphere of vengeance. Instead of calls to preserve fundamental human rights, Egyptians now praise their internal security forces for killing and arresting en mass those associated with the Muslim Brotherhood – the newly declared enemy of the state.

That these are the same people who won Egypt’s first freely contested parliamentary and presidential elections is apparently of no consequence. What is consequential, however, is the transformation of a grassroots revolution into an indefinite War on Terror. Rather than challenge police abuses, Egyptians compete to be the most patriotic in supporting the army and security forces’ violent crackdown of the Muslim Brotherhood, while the crackdown's expansion to secular youth groups is met with equal support.

When criticized by the international community for violating international norms, the Egyptian state points to the language of the U.S. government as its exemplar. And, sadly, it is true that the United States’ War on Terror effectively legitimized practices that were once only associated with pariah states.

Prior to the global war on terror, torture, abuse of law to persecute political opponents, and fostering an environment of fear among the populace to justify state-sponsored violence led to nations being stigmatized. Indeed, before 9/11, Egypt’s violent repression of Islamist groups under the auspices of national security in the 1990s was dismissed as a pretext for political oppression and authoritarianism.

The United States’ open-ended global war on terror initially targeted al Qaeda and Osama bin Laden, expanded to the Taliban in Afghanistan and Pakistan, then to Ba’athists in Iraq, and eventually encompassed anyone deemed a “jihadi” who opposed U.S. foreign policy. Meanwhile, orthodox Muslims in the U.S. critical of America’s national security policies also became targets in this indeterminate conflict – their charities were shut down in the wake of 9/11, assets frozen, and leaders were prosecuted under laws prohibiting material support to terrorism, even if the allegedly illegal acts had no clear connection to Afghanistan, al Qaeda, or the September 11 terrorist attacks.

As Muslims in Guantanamo were tortured and denied basic due process rights, Muslims in America had government informants infiltrate their mosques, businesses, and social gatherings. Muslims were placed under various forms of electronic surveillance and too often treated as a fifth column by virtue of their religious identity. And when they decried violations of their civil rights and liberties, the government propagated fear-based narratives to persuade Americans that such sacrifices were necessary to protect the nation against those intent on killing Americans. We were frightened into believing that civil liberties and human rights were a luxury that a nation at war simply could not afford.

The War on Terror not only led America to stray from its founding principles, but also legitimized practices once reserved for the most authoritarian states.

Applying the logic of the U.S. playbook, the Egyptian military and security forces are currently using a fear-based narrative to justify mass arrests and prosecutions of the leadership of its political opposition – both the Muslim Brotherhood and secular youth groups. The Muslim Brotherhood has been designated a terrorist group, a move that legalized the freezing of the assets of more than 1,000 charities that provide health care and food to millions of poor Egyptians neglected for decades by the state.  Labeling the political opposition as enemies of the state has also led to the arrest of hundreds of university students, women, and youth activists whose punishment for opposing the government crackdown is a five year jail sentence.

True, the Egyptian government has taken things further than the U.S., with anti-government protests brutally quashed with indiscriminate shootings of hundreds of unarmed civilian protestors. Yet more than a decade after the War on Terror was launched, Americans are just discovering the extent to which the U.S. government has eviscerated civil liberties, not just of Muslims but for all Americans.

The National Security Agency’s mass surveillance programs have proven right the critics’ warning that the War on Terror has served as the pretext for government overreach and suppression of dissent. The reality is that mass government surveillance has now become the new normal in a nation founded on individual privacy and distrust of government.

As we approach the third anniversary of Egypt’s historic January 25 revolution, the Egyptian state has masterfully transformed a revolution for freedom and justice into an indefinite War on Terror. And, rather than make America a beacon of freedom, U.S. government practices now serve as a model for authoritarian ones.