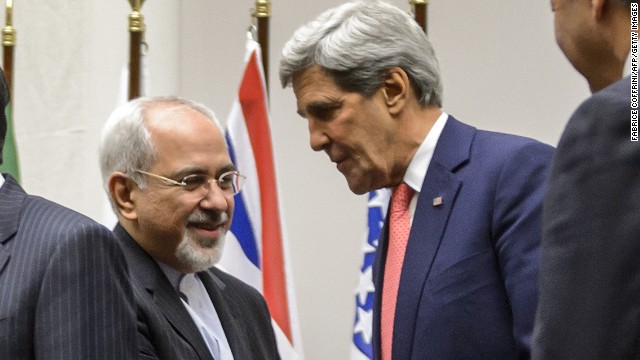 By Maseh Zarif, Special to CNN

Editor’s note: Maseh Zarif is deputy director at the American Enterprise Institute’s Critical Threats Project. The views expressed are the writers’ own.

Obama administration officials have been preening since the announcement that the November 2013 “Joint Plan of Action” (JPA) deal with Iran will be implemented beginning January 20.  But the credibility of the deal – and the negotiators that struck it – is in trouble for one simple reason:  The JPA fails to verifiably eliminate Iran’s ability to develop nuclear weapons. Or more succinctly, in Iranian President Hassan Rouhani’s words: “In Geneva agreement world powers surrendered to Iranian nation's will.”

It became apparent during negotiations last year that the administration was ready for a deal that left Iran with considerable options in developing a nuclear weapon. The “first step” agreement did nothing to force Iran to address weaponization-related activities or its pursuit of ballistic missiles, which could serve as delivery vehicles for a nuclear warhead. And over-reliance on Iranian cooperation with the International Atomic Energy Agency will be another problem. Indeed, Tehran just postponed a forthcoming meeting with the IAEA on weaponization questions.

Uranium enrichment and other related projects will continue unchecked, despite officials’ arguments that Iran’s nuclear fuel cycle activities would be halted in significant ways. Indeed, a senior administration official conceded this week that the testing and feeding of advanced-generation centrifuges will be allowed under the deal’s implementation plan. The Iranians will, as a result, continue to improve their ability to produce enriched uranium more efficiently.

After a reporter subsequently asked why it was not preferred that such research be halted, the U.S. official responded: “Well, I mean, one can always imagine other things, but that’s the arrangement that was made.” The inherent message – “we took what we could get” – is another sign of weakness for an administration already hemorrhaging credibility. In practical terms, this approach will embolden the Iranians to continue extracting important concessions and to exploit the forthcoming implementation period in ways that could negate the claimed merits of the agreement.

More from GPS: What critics get wrong about Iran deal

The prospects that some of the flaws inherent in the first step will be resolved at a later stage are dim. Most significantly, language agreed upon for the outline of a potential final deal suggested that core elements of Iran’s nuclear weapons program, most notably uranium enrichment, could remain intact. The administration’s positions and negotiating record thus far demonstrate its emphasis on process rather than substance and its prioritization of a deal over achieving an outcome that prevents Iran from getting nuclear weapons.

An overarching but related problem for the administration is its unwillingness to acknowledge and confront the broader issue. The regime and its leadership remain fundamentally hostile to the U.S. worldview. They pursue a regional agenda that is inimical to American interests and those of our allies and partners. One only need review some of what the Iranian regime and its agents have been up to over the last several months to understand that.

Tehran has long been aiding the al-Assad regime in the Syrian war, deploying Iranian military personnel, enlisting Hezbollah and Iraqi Shia militia fighters, and sending financial and other military support. Since the JPA was signed in November 2013, Iran reportedly sent 330 truckloads worth of weapons and related equipment into Syria from Iraq, where it has stoked sectarian tensions through its relationship with Iraq’s current government. In Bahrain, authorities seized arms and explosives being sent from Iran in late December before announcing details about an alleged Iranian-backed terrorist cell.

Across the broader Middle East and beyond, Iran foments instability and undermines U.S. policies and allies. The JPA has not changed that reality. Some interlocutors directly involved in nuclear negotiations, whom administration officials have defended as reasonable counterparts, have been unambiguous about where the regime’s interests and tendencies lie. While Secretary Kerry was reprimanding Congress for its effort to increase the credibility of future pressure against Iran and declaring that “this is the time for statesmanship,” his Iranian counterpart, Foreign Minister Javad Zarif, was in Beirut offering praise for and laying a wreath at the tomb of Lebanese Hezbollah terrorist Imad Mughniyeh. Mughniyeh was responsible for the 1983 bombing of the U.S. Marine barracks in Lebanon, among other attacks.

There will inevitably be a great deal of noise and misdirection over the coming months. For all that might change, a great deal will likely remain the same. For Iran, the period during the scheduled implementation of the JPA will be reminiscent of the period before it: the regime’s leadership will seek to maintain and develop their nuclear weapons program and options, weaken the sanctions regime, and attempt to advance efforts to dominate the broader Middle East at the expense of American influence and interests.

Unless the Obama administration confronts these realities and works to prevent Iran’s pursuit of its ambitions, it will lose the next six months as it has lost the last six months.