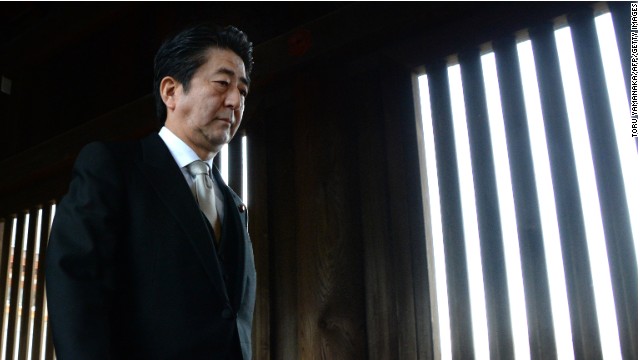 U.S. should speak truth to Japan

Editor’s note: Gregg Andrew Brazinsky is an associate professor of history and international affairs at George Washington University and advisor to the North Korea International Documentation Project at the Woodrow Wilson International Center for Scholars. The views expressed are his own.

Japan can sometimes be wrong, a basic fact that Washington sometimes seems to have a problem understanding. American officials have long seen Japan as a staunch U.S. ally, one that former Japanese Prime Minister Yasuhiro Nakasone once suggested could become an unsinkable aircraft carrier in the Pacific. But while this may be true, since securing power in December 2012, Japanese Prime Minister Shinzo Abe has done far more to undermine American strategic interests in Asia than to support them.

Regrettably, the Obama administration’s response to this unfortunate shift in Tokyo’s foreign policy has been weak and confused. It’s time for the U.S. to get serious about reining in Japan.

With his decision to pay an unexpected visit last month to the controversial Yasukuni Shrine recently, Abe demonstrated once again that his government is willing to put a nationalist agenda ahead of both peace and America’s security. The shrine has become notorious among Japan’s neighbors because among the war dead are also enshrined 14 Class A war criminals found guilty of committing war crimes before and during World War II. For Chinese and Koreans in particular, Abe’s visit there conjures up painful memories of the horrors inflicted on them by Imperial Japan in the early twentieth century, and they are understandably outraged.

Abe’s move comes at a time of rising tensions in the region, and it is clear the Japanese government has chosen a truly inopportune time to inflame its neighbors. U.S. interests lie in preserving peace and stability in the region, a task that has already been made more difficult in recent months by an increasingly assertive China and the always unpredictable regime of Kim Jong Un in North Korea.

The reality is that even a hint of a military clash in Northeast Asia could have a disastrous impact on the global economy and jeopardize America’s economic recovery. The Obama administration’s policy has been to prevent this from occurring by strengthening America’s presence in the region and urging all of the key players to avoid provocations. But if Japan, a country that U.S. forces are obligated to protect by a security treaty, openly ignores Washington’s pleas to dial down tensions, then how can China, a country with far fewer reasons to trust the United States, be expected to do otherwise?

“The Obama administration’s response to Abe’s troubling behavior has been far too weak and temperate to be effective, limited as it has been to a brief statement by the American Embassy in Tokyo expressing “disappointment” and calling for more constructive ways to handle sensitive historical issues.” Though some media have characterized this as an unusually direct criticism of Japan, it amounts to little more than a slap on the wrist and is unlikely to sway Abe.

Indeed, Americans should be just as outraged by Abe’s decision to visit Yasukuni as Chinese and Koreans are. Several of the Class A war criminals enshrined there were convicted and executed on Count 29, “waging aggressive war against the United States,” during the Tokyo War Crimes Trials.  They were therefore directly responsible for the Japanese attack on Pearl Harbor and the bloody battles that followed at Guadalcanal, Iwo Jima, Okinawa and elsewhere.  Have we forgotten the more than 100,000 American servicemen who lost their lives during these campaigns?

So, what should the United States do moving forward? If it is serious about its “Asia Pivot” and is truly committed to promoting peace and stability in the Pacific, then President Obama or Secretary of State Kerry would do well to make a major address on American policy toward the region in the near future.  Such an address should thoroughly explain Washington’s views on the territorial and historical disputes that threaten to provoke a lethal conflict.  It should also discourage provocations by all parties while making it clear that the longstanding U.S.-Japan alliance does not mean that America condones Abe’s repugnant behavior.  Finally, the address should strongly criticize the visit to Yasukuni Shrine and other efforts by Tokyo to excuse or glorify the atrocities committed by Japan during the Second Word War.

Only by having the courage to criticize our close allies when they have chosen the wrong course can America demonstrate the kind of wise and impartial leadership that Asia is right now so desperately in need of.