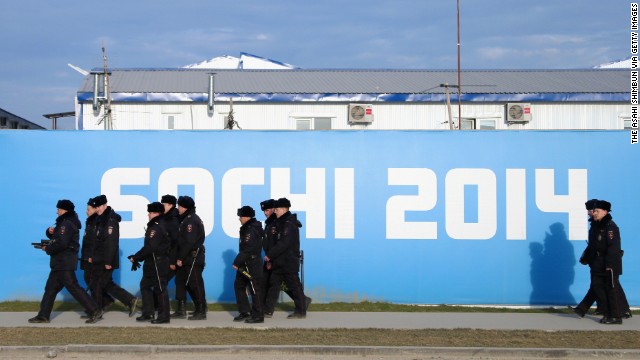 Sochi has (almost) nothing to fear but fear itself

By Mark Galeotti, Special to CNN

Editor’s note: Mark Galeotti is professor of global affairs at New York University’s SCPS Center for Global Affairs. You can follow him @MarkGaleotti or on his blog, ‘In Moscow’s Shadows.’ The views expressed are his own.

News potential female terrorists – so-called “black widows” – may be loose inside or around the Sochi Winter Olympics security zone has inevitably stirred up fresh concerns about the Games. Athletes and prospective visitors are wondering if they will be safe. The United States is preparing plans in case its citizens need to be evacuated. The more the conversation about Sochi is about the threat, though, the more the terrorists have won – and a cheap victory at that.

The Games have become a symbolic test for Russian President Vladimir Putin, and what matters to Putin gets top priority. The security effort is unprecedented. There will be up to 40,000 police and security officers there, including Interior Ministry troops, and an anti-terrorist commando force: that’s the equivalent of one for every nine inhabitants of the town of Sochi, and more than were on duty at peak times during the much larger London Olympics in 2012. There will also be regular soldiers on duty, including divers will also be divers watching the Black Sea coast and surface-to-air missile batteries that could claw a 747 out of the skies. And those skies will also be patrolled by drones, while elite Spetsnaz commandos scour the surrounding mountains, just in case terrorists try to get into the zone cross-country.

Of course, the presence of foreigners and the international media, as well as the importance Putin has invested in the Games, mean they are a target of choice for the assorted radicals and jihadists of the North Caucasus. Theirs is not a unified, disciplined rebel army, more a collection of loosely-affiliated small-scale and local groups called jamaats. For that reason it is hard to be certain exactly what might be being planned, but Chechen rebel commander Doku Umarov – whom some reports say has since been killed – called for “maximum effort” to be spent disrupting these “Satanic Games” back in June.

Sochi, though, is a pretty hard target. Of course, no security can ever be perfect, and Russian security has in the past been shown to be especially erratic. Unprofessionalism, a lack of initiative and simple corruption can all put holes into any “ring of steel.” Moscow does seem to be aware of this, though, and is doing what it can to compensate. Checks are often automated and multiple, for example, and the sheer number of officers on the ground does create redundancies and controls.

Even the news about one of the potential terrorists at large in Sochi has a silver lining. She appears to have been a person of interest to the Russian Federal Security Service, under some degree of surveillance, who then dropped off their radar. This may or may not mean anything, and there is actually no evidence so far that she is in Sochi or even headed there, despite reports that she may have been spotted in the area. In those circumstances, it is right and proper that the Russians be cautious and work on the assumption that she might. In this respect, it is encouraging that the Russian authorities are able to identify potential attackers and are willing to do something about it, and to do so openly. (Unlike the Soviets, who hushed up any potential threats to the 1980 Moscow Olympics.)

Overall, then, although making predictions is always a risky business, the Winter Games venue is likely to be as secure as possible given the presence of an active and murderous jihadist insurgency just a few hundred miles away.

Still, if the terrorists can’t hit Sochi itself, they can do the next best thing. That is to create a climate of fear around the event. The recent suicide bombs in Volgograd and Pyatigorsk, for example, posed no direct threat to the Games. Volgograd is over 400 miles from Sochi; it would have been like trying to disrupt a presidential inauguration in Washington by hitting Cincinnati. But they certainly generated headlines and international concern and that, for the terrorists, is the point.

They will, of course, hope to be able to strike directly at Sochi: even a suicide attack triggered at a checkpoint, while actually showing the effectiveness of the security cordon, will be seen as an “attack on Sochi.” But if they cannot do that, then they can at least try to control the conversation, with a steady stream of attacks in the Russian south, hair-raising threats – on Monday they released a video promising “a gift” in store for spectators visiting Sochi – and propaganda stunts. Indeed, that “black widow” may have simply gone to ground precisely to trigger the newsworthy police hunt for her.

There may be more attacks in southern Russia over the next few weeks. Nonetheless, the Games are likely to be safe from terrorism, if not from shoddy construction, heavy-handed policing and scalping prices. The challenge is for Moscow to hold back from the kind of heavy-handed over-reaction that tends to alienate non-Russian communities in the south and push more into the arms of the jihadists, and for the rest of the world to take the threat seriously, but not more seriously than it deserves.

In the modern 24/7 media age, after all, the terrorists’ opportunities to spread fear and shape public perceptions are greater than ever.