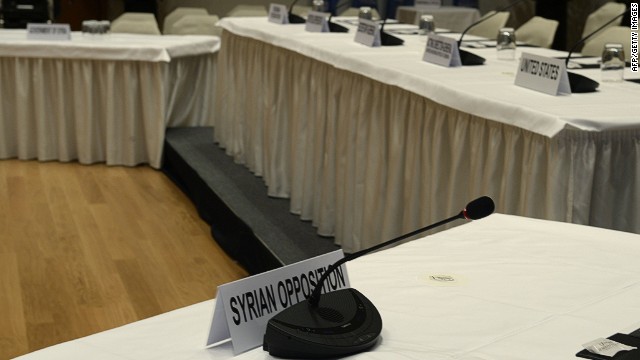 The successful shortfalls of the Syrian peace talks

By Tom Perriello, Special to CNN

Editor’s note: Tom Perriello is Center for American Progress Action president. He recently returned from the Turkish side of the Syria boarder, where he conducted interviews with Syrian leaders and refugees. The views expressed are his own.

Expectations were low for the Syrian peace talks that started in Geneva late last month. Indeed, during dozens of interviews with Syrian leaders before talks began, the two words I heard most in reference to the conference were “trap” and “fake.” And I was among the skeptics, concerned that the Geneva process reflected more of a desire by the international community to look like it cared than an actual strategy.

Yet while the initial talks produced no major breakthroughs, they have faltered in surprisingly constructive ways that clarify and advance the difficult choices the international community must face to address the crisis in Syria. And, with the announcement today that Syria will join a second round of peace talks next week, consideration of a course correction on U.S.-Syria policy could prove to be one of the outcomes.

The opening round of talks clarified that Bashar al-Assad and his regime are the primary barrier to peace in Syria. Regime figures lashed out belligerently at United Nations mediators and refused to acknowledge that a civil war was even underway, referring only to their fight against terrorists. But new photographs of the regime’s torture campaigns and the barrel bombs that continue to fall on civilian areas leave little doubt about al-Assad’s willingness to brutalize his own people even while claiming to fight extremists.  Most urgently, the regime backed off initial indications that it might allow humanitarian access to civilians long besieged in Homs.

Still, even as it’s becoming increasingly clear that the al-Assad regime is standing in the way of peace, we are also seeing daylight between Russia and al-Assad.  The al-Assad regime’s outbursts and opposition to humanitarian access has prompted Russia to privately express its growing frustration with its ally. An official from the Russian Foreign Ministry told me Russia is “embarrassed” by the al-Assad regime’s poor showing at Geneva. Even the Syrian Arab Red Crescent took the unusual step of calling out the failure to reach agreement on neutral delivery of humanitarian aid.

This growing distance between Russia and the regime could create real pressure in future talks or increase the chances of a U.N. Security Council Resolution demanding humanitarian corridors in Syria.

The al-Assad regime’s outbursts not only frustrated Russia, but also contradicted international expectations that the Syrian government officials planned “to present themselves as the grown-ups at the peace conference.” Instead, as Anne Barnard noted in the New York Times, “The Syrian officials took offense easily. They berated fellow Syrians, foreign reporters and the head of the United Nations.”

In contrast, it was the opposition – which at first refused to commit to the talks or name its delegates – that ultimately engaged substantively on questions of humanitarian access and a transitional governing body. In fact, it was the opposition that presented itself as a coherent partner for peace. This better-than-expected performance on the diplomatic front from the opposition reinforced new developments on the military front – the armed opposition’s recent declaration of war against al Qaeda factions across northern Syria.

Despite dim prospects for a diplomatic or military breakthrough, many of the same Syrian opposition leaders who believed Geneva II was a rigged farce are now telling me they are cautiously optimistic about the international community’s role. However, these same leaders still expect al-Assad to reject any serious steps towards peace. There remains deep distrust and anger among many Syrians at the West’s failure to intervene with force, but Geneva II has begun to rebuild trust in ways that could be reinforced in subsequent rounds, if the West remains steadfast in opposition to the Assad regime and efforts to target civilians with bombs or starvation.

Last year ended with Syria rapidly spiraling toward a worst case scenario: Al Qaeda safe havens across the north, al-Assad bombing and besieging civilians, moderate leaders killed or marginalized, and neighboring allies destabilized. But 2014 has begun with small breakthroughs and reminders that there are Syrians dedicated to a peaceful solution. Geneva II has not produced any concrete political solutions. But it has managed to resuscitate a sense of urgency in finding a post-al-Assad solution for the Syrian people while reaffirming the Syrian opposition coalition as a credible partner.

Topics: Syria
Next entry »Young and gay in Russia: Inside the making of a documentary
« Previous entryTime to put people before land profits

Next entry »Young and gay in Russia: Inside the making of a documentary
« Previous entryTime to put people before land profits