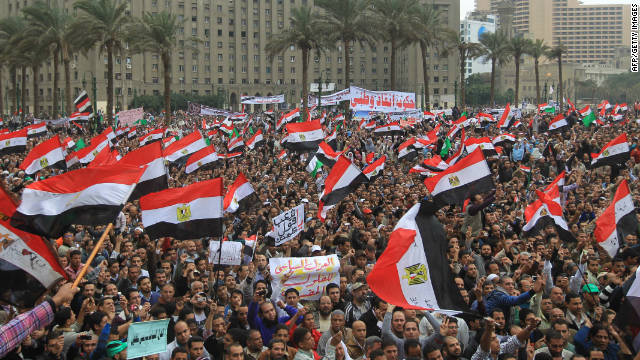 What next for Egypt?

This month marks three years since Hosni Mubarak resigned as Egypt’s president. But what does the future hold? GPS intern Avi Asher-Schapiro speaks with Shadi Hamid, a fellow at the Project on U.S. Relations with the Islamic World at the Brookings Institution's Saban Center and author of the forthcoming book Temptations of Power: Islamists and Illiberal Democracy in a New Middle East, for his take on what to look out for.

What do you make of the current political climate in Egypt? Are we in the midst of a democratic transition or witnessing the return of authoritarianism?

You have to be patient with democratic transitions in general. The problem in Egypt is that there is no democratic transition at all. So there’s really nothing to be patient for. If you believe that autocracies like the current military backed government in Egypt are by their very nature not permanent, then yes Egypt will eventually get better. But there’s no real reason for optimism at this moment; I don’t think patience is much in order.

So we have to start asking: how bad can things really get in the short term? How long can a military regime in Egypt last? And how ugly will its removal or fall be?

Was the optimism that surrounded the overthrow of Mubarak misplaced?

Three years ago, many Egyptian were understandably optimistic about their political future. In retrospect too optimistic, but they had good reasons to be that way. It was going to be difficult and messy, but the basic trajectory was in a positive direction. But once the military coup took place over the summer [when the military deposed Muslim Brotherhood elected President Mohammad Morsy] it was inevitable that you would see the subsequent events: mass killings and repression.

What do you make of the head of the Egyptian armed forces Field Marshall Abdel-Fattah El-Sisi? Many are predicting he will run for President of Egypt. What’s your take?

El-Sisi has no choice but to run now. He will face a public backlash if he chooses not to. There’s so much desire for a strongman figure, for him not to run would undermine his popularity and long-term credibility. This, of course, is the danger with populist sentiment.

El-Sisi himself is responsible for drumming up a frenzy of popular support and he actively pushed and encouraged the myth-making. He created his own monster. The problem when you play with public sentiment is: what happens when you lose control?

But really his candidacy is inevitable and there are no civilian alternatives who people are excited about.

So should we expect a military government in the long-term?

The current popular sentiment in Egypt goes something like this: a military government is not ideal but we have no other alternative. In my view, there’s a real political culture problem here. Egyptians tend to look to the military as a kind of savior in tough times and there exists an obsession with the state – capital S. Egyptians see a lack of stability and they turn to the state as a protector, in particular to the military. This is all despite the fact that the Egyptian military has registered very few tangible successes since the 1950s. You would think after decades of failure, Egyptians would wean themselves off this notion. But that hasn’t happened yet.

Just a year ago, the Muslim Brotherhood governed Egypt. Now many of the group’s leaders are in jail while the rank-and-file protest the military-backed government. What’s next for the movement in Egypt?

It’s clear that the Brotherhood has no short term future in Egyptian electoral politics because the new military-backed regime will not let them back in. In my view, the Brotherhood is beyond the point where it will accept a few seats in the next parliament as consolation. They were in power, that’s the baseline here.

I do see a potential gap between the leadership of the Brotherhood and the grassroots rank-and-file. Many of the latter see continued protests as their only way going forward. Even if the leadership wanted to tell the grassroots to give up the fight, to stop protesting, there’s a degree of inflexibility on the street level.

But I don’t think the Muslim Brotherhood can be destroyed. Historically, it’s a largely cohesive hierarchical organization with strong loyalty on the part of its membership. They have a tradition and mythology of self-sacrifice they are willing to do that for many years to come.

Egypt’s economy is struggling. Tourism is faltering and this past week the Ministry of Finance reported that overall investment was down 7.3 percent. GDP growth has fallen to just 1 percent. Does the current government have a plan to fix the economy?

We know that the Egyptian military isn’t good at running an economy. We’ve seen that under military rule in 2011 and 2012. Part of the problem is the military is bound by populist sentiment, and it’s just too risky to go against it. It’s very unlikely that the sitting government will feel comfortable angering a broad swathe of Egyptians when it comes to tough issues like subsidy reform and structural adjustments. The big picture here is we can’t separate the economic issues from the political. If you have political instability, it undermines the government’s economic policy and visa-versa.

In the meantime, Egypt has been leaning on Gulf countries for economic support. While that aid is critical, it’s not a solution for long-term development. Gulf aid is just budgetary support which plugs the short-term gap. Egypt needs strong, confident, bold leadership to address its economic problems and I don’t’ see that coming anytime soon.

How would you rate the Obama administration’s approach to Egypt?

First of all, the U.S. hasn’t had an Egypt policy to start with. There isn’t even a semi-coherent approach to Egypt and there’s no willingness to develop one. This stems from the administration’s overall philosophy. They don’t want to be more involved in the region; they want to be less involved. Their thinking is: engage where we must and disengage when we can.

We know that Secretary of Defense Chuck Hagel has called Field Marshall El-Sisi over 30times since the coup last summer. But those calls are divorced from any broader agenda. The Obama administration has never been serious about applying real pressure on Egypt and that’s why we have yet to see a discussion about suspending any significant amount of aid for any reasonable amount of time.

A less autocratic, less repressive, more inclusive Egypt should be a priority not just because of the moral aspect; a more autocratic Egypt means a less stable Egypt in the medium to long-term. Egypt can only be stable if the government is inclusive, responsive, and accountable to its own people. Autocracies can seem stable. But that is an illusion that won’t last forever. It’s only a matter of time until these “stable autocracies” begin to fall apart. That should have been the main lesson from the Arab Spring, but unfortunately that lesson hasn’t yet been learned.