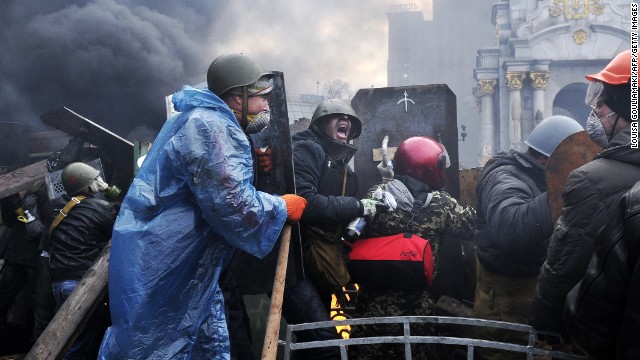 Zakaria: Very little the U.S. can do on Ukraine

CNN speaks with Fareed about the unrest in Ukraine and what, if anything, the United States should do. This is an edited version of the transcript.

Earlier this month, a phone conversation was leaked between a high-ranking State Department official, Victoria Nuland, and the current U.S. ambassador in Ukraine. Nuland had some embarrassing comments about the E.U. on what is going on in Ukraine now. Is it your sense that this was leaked by the Russians or the pro-Russian Ukrainians to embarrass the United States?

My guess is it was leaked by the Russians because they do have the capacity to overhear that kind of conversation. The basic point Victoria Nuland was trying to make, I think, is that the European Union has been playing a kind of slow economic game here, whereas the Russians have been playing a fast geopolitical game.

By which I mean the European Union has been offering the Ukrainians a deal and association, but as long as they make certain kinds of structural economic reforms and get rid of subsidies on various industries. In other words, it's a kind of almost like a regular trade negotiation where they're trying to get the Ukrainian economy to become more market friendly.

The Russians, on the other hand, are playing a geopolitical game, and they first offered Ukraine essentially a $15 billion bribe, subsidized fuel and such, and then just recently, another $2 billion. So, Putin is basically saying here's cash, no conditions asked, you be part of my sphere of influence.

The Europeans, however, are playing this much longer-term game to try to turn Ukraine into a kind of middle class, you know, liberal democratic, capitalist society, and the two timetables are completely off. So, the Europeans have badly misplayed this hand. They should have, if they were going to step in there and try to wean Ukraine away from Russia, they needed to do something fast. They needed to do something that was overwhelming and that made it very difficult for the president to turn them down.

President Obama said there will be consequences if people step over the line in Ukraine, referring to the government in Kiev right now. What realistically could those consequences be?

Very little, because the truth of the matter is we're not going to send an army there. And if we put sanctions on Ukraine, the danger is it will only push the Ukrainians closer to Russia. I'm not saying we shouldn't do something. I'm just saying our options are much more limited. The crucial issue here is what does the Ukrainian army do? The country is divided, but not quite 50-50.

The Ukrainian part, if you will, is larger, and I think the younger population – the future of Ukraine –clearly looks to the west. The ethnic Russian part is only about 17, 18 percent. And if you look at Kiev, 75 percent of them didn't vote for this president.

Topics: Europe • Protests
Next entry »Why U.S. should care about Syria crisis
« Previous entryTime to put trade above politics

Next entry »Why U.S. should care about Syria crisis
« Previous entryTime to put trade above politics