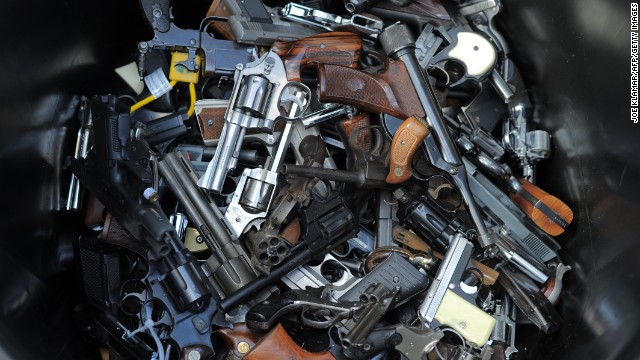 What Missouri’s gun law change did

By Daniel Webster, Special to CNN

Many Americans have a built in bias when they’re considering the potential for gun laws to reduce violence. After all, our TV screens are regularly filled with stories about gun violence – a gang member suspected in a triple shooting in South Chicago, an estranged husband murders a woman and then commits suicide, a shooting at local night club, scores dead and injured after a gunman opens fire in a crowded movie theater.

So it might seem logical that with so many dangerous people apparently determined to kill, and so many guns already in circulation and available to those individuals, that efforts to prevent killings through gun laws are futile. It’s an idea encouraged by the rhetoric of the National Rifle Association and others who argue that criminals, by definition, won’t obey gun laws.

But our perceptions of reality can be distorted by the things that we don’t see every day – what the media does not or cannot report.  For example, aside from the FBI’s records of the number of individuals who don’t pass background checks when attempting to purchase a firearm, we simply cannot know how many people don’t even try to buy a gun because they are disqualified from possessing guns.

That’s where a closer look at some of the data that isn’t widely publicized is crucial – and one state in particular offers some of the clearest evidence yet that gun laws can, in fact, make a difference.

But first, some important background. A study of Chicago’s underground market, led by Duke University economist Philip Cook, revealed that the vast majority of criminals did not have guns, and that those considering acquiring guns often had considerable difficulty linking up with suppliers – not because there weren’t enough guns in circulation, but because they had trouble finding trusted suppliers.  This matters to potential buyers because a seller you don’t trust could be sticking you with a gun that, through standard ballistics tests, has been linked to prior shootings.  Or someone “on the street” could be setting you up to be robbed and killed, or they could be an undercover cop.  Such findings were consistent with what I learned when my study team interviewed incarcerated young people in Maryland.

And this goes to the crux of the challenge in assessing the effectiveness of gun laws – because there is no reliable way to identify specific homicides prevented by gun sales regulations, the only thing we can do is look at rigorous studies of how homicide rates do or don’t change in response to changes in gun laws to estimate a policy’s effects on homicides. Such studies do exist – and there important lessons that we could be drawing.

More from GPS: The real tragedy of America's gun violence

Look at Missouri. Handgun purchaser licensing allowed the state (and several others) to close a gaping hole in federal gun laws by extending background check requirements to handguns sold by those not licensed to be gun dealers. And as the only state to change its policy on handgun purchaser licensing in recent years, Missouri offers a valuable opportunity to study the impact of loosening gun restrictions.

On August 28, 2007, the state repealed its purchaser licensing law and, as a result, private sales of handguns no longer required purchasers to undergo a background check. Following the repeal, my research team found a two-fold increase in the share of guns recovered by police in Missouri that had recently been sold by a licensed gun dealer, and an increase in the flow of guns from Missouri to the neighboring states of Illinois and Iowa, both of which have handgun purchaser licensing laws. In addition, there was a large increase in the share of crime guns that had originated with a retail sale within Missouri. All signs, then, suggest that repealing this law increased the flow of guns to criminals.

Simply put, the consequence of more criminals getting guns was more deaths from guns in Missouri. Data from death certificates indicated that firearm homicide rates in Missouri rose dramatically in 2008, the first year after the law’s repeal, and were 25 percent higher than pre-repeal trends through the end of 2010. This change was at odds with national trends in firearm homicide, which declined by 5.5 percent during that period.

Importantly, changes in non-firearm-related homicides in Missouri did not vary from national trends.

This was not a regional phenomenon. The aggregated firearm homicide rates for the eight states that share a border with Missouri were down 2.2 percent from baseline trends. Nor was it a result of new gang wars or some type of breakdown in law enforcement in one of Missouri’s cities. Firearm homicide rates rose dramatically in both the St. Louis and Kansas City area, as well as in suburban counties.

So, what else might explain why firearm homicides in Missouri increased so dramatically following the repeal of its handgun purchaser licensing law – was it changes in policing levels, incarceration, unemployment, poverty, or other changes in state laws such as Stand Your Ground laws or Right-to-Carry laws? We collected data on these factors and statistically controlled for each one. After doing so, we estimated that the repeal of Missouri’s handgun purchaser licensing law was associated with a 23 percent increase in firearm homicide rates and had no impact on homicides by other means.  Using data from police records rather than death certificates allowed us to extend the study period through the end of 2012. Our analyses revealed a 16 percent increase in overall murder rates over the first five full years the law was no longer in place.

The reality is that policy researchers don’t have the ability to field randomized studies (assigning one state a specific gun law and withholding the law from another state) in order to test hypotheses about cause and effect.  The best we can do is use the most rigorous research methods to see if and how things change in response to public policies and then rule out hypotheses that the changes are due to factors other than the policies being considered.

All this means that this new study is certainly not the last word on the effects of gun control laws on public safety – more research is needed to fully understand how gun laws affect the ability of dangerous individuals to access guns. But at least in Missouri, the evidence seems clear – the state’s handgun purchaser licensing law was preventing homicides.  Now that it has been repealed, more people are being murdered.