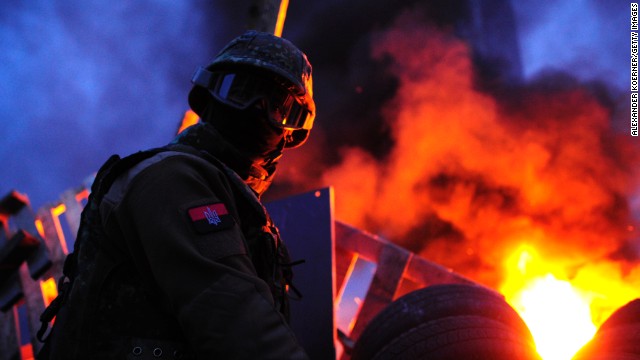 CNN speaks with Fareed about the ongoing unrest in Ukraine, why it matters to the West, and why there is little the United States can do.

You have followed this crisis very closely, but many may not. What is this fight about in the Ukraine, and why does it matter so much to the United States and Russia?

If you think of Ukraine, we think of it as a country, we assume it's always been the country with the same borders and the same people. But Ukraine is really divided, and historically has been divided between a western half and eastern half, roughly speaking. The western half of what is now Ukraine used to be part of Poland. So it was only joined after World War II. So that point is in a sense longing to reunite with its European history and heritage.

The eastern part, on the other hand, has long been attached to Russia. So this is a struggle between east and west for the soul of Ukraine. And of course, naturally, Russians feel a natural affinity to the eastern part, and westerners, including in Europe and in the United States, feel that the western part of Ukraine deserves to be in Europe. So it's really a struggle for the soul of Ukraine. As you say, it involves the rest of the world because each side is searching for an identity.

At the beginning of this, we do know that protestors were calling for a close relationship with Europe. But now, we're hearing protestors call for really the overthrow of the Ukrainian government, calling for President Yanukovych to resign and step down. Is that at all a possibility here?

It seems unlikely. It really depends which way the Ukrainian army goes.

That's the key factor in tipping the balance in how this is going to go?

Remember Egypt. That was a case where when Mubarak was president, the army decided they weren’t going to obey any instructions that involved firing on their own people. So the question is, will the Ukrainian army go the way of the Egyptian army, or will it do what the Syrian army has done, which is when there were protests on the street, the government says disburse them by whatever means necessary, and they did it. We don't know, but we know that the head of the army, a key general, was fired. So clearly there's tension there between the government and the army.

President Obama has said there will be consequences if people step over the line. People will remember, not too far in the distant past, the president talking about crossing the red line in Syria. Do you think folks take another line seriously? Does it mean anything at this point?

In the media, we like to think about it that way, but people in Ukraine are listening and watching to what's going on in Ukraine. The reality is we don't have many options. There’s no prospect, as there was in Syria, that the U.S. is going to send troops into the Ukraine or the Europeans are going to send troops. So really the question is could we do something short of that, sanctions? But remember, what would sanctions do? They would isolate the west even more from Ukraine and tie Ukraine and its economy even more closely with Russia.

In a sense, both sides were trying to woo the Ukraine. The Europeans laid out this economic package for Ukraine, but they said you have got to reform your economy. You have to make it more market oriented – all good stuff. But it was sort of like a slow economic gain.

Very long term modernization of Ukraine. The Russians put $15 billion on the table, no questions asked, and then they put another $2 billion on the table. So they were playing a kind of fast geopolitical came. We were playing this much slower economic modernization game. And as a result of it, the president, who had not wanted to be part of Europe, said the Europeans are being too fussy, I'm going to go with the Russians instead.

So we should have recognized the stakes were high. We needed to woo Ukraine. There wasn't a sense of strategic urgency, mostly on the part of the Europeans. I think the U.S. was actually prodding Europe to go faster. Europe tends to act in geopolitical terms very slowly.

You can look at long term, near term goals, but there are people dying in the streets. The violence is picking back up. When you talk about sanctions, I think many people are concerned what kind of immediate difference or influence can sanctions play on the fighting we're seeing in the streets? I think people say very little. It's really up to the Ukraine to figure itself out right now.

But we do have this reality, which is Ukraine and large parts of it and probably part of the army think of themselves very differently than Syria or North Korea. And so if there is international condemnation, frankly if the media shines the light, if there are condemnations from President Obama…

It will have more of an impact.

It will have more of an impact. Ukraine wants to think of itself as a modern, developed country. Large parts want to be part of Europe. They don't want to be seen as a third world dictatorship where troops are spraying tear gas on their own people.