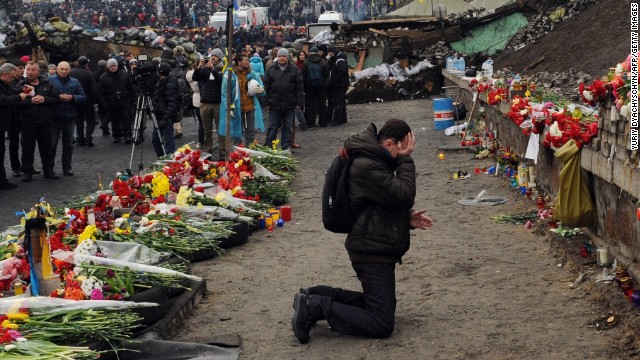 Editor’s note: James F. Collins, a senior associate and diplomat-in-residence at the Carnegie Endowment for International Peace, was the U.S. ambassador to the Russian Federation from 1997 to 2001. The views expressed are his own.

The issuance of an arrest warrant for deposed President Viktor Yanukovych at the weekend was just the latest twist in a dramatic few months in Ukraine. But if the country wants to achieve accountable government, economic recovery and preserve its sovereignty, territorial integrity and independence, it is vital that all sides focus on reconciliation, a political way forward and most immediately an end to violence.

Of course, seeing, hearing and living Ukraine’s present agony, the impulse to do something is unavoidable. The images of a Maidan on fire, bloodied faces in helmets and headscarves, and flames engulfing the heart of Kiev moves anyone who cares to rage at the senseless brutality that has engulfed the heart of this new nation. But there is little more disheartening than the reversion of outside commentary to talk about Ukraine’s catastrophe as some kind of Super Bowl conflict between the U.S. and Russia or East and West – and an obsessive focus on who is winning and losing. It is quite clear that the real losers in this conflagration are Ukraine’s citizens, whose fate is in the balance and whose future is perilous.

The reality is that the major part of Ukraine’s present condition is home grown. From the earliest moments of independence, Ukraine’s citizens have let their divisions – cultural, linguistic, religious, and economic – drive their politics. At times, the country’s leaders have risen above narrow interests to reach compromises and set down foundations for a united future. But too often, these compromises left unaddressed deep-seated mistrust, centuries old historical grievances, and perceived and real inequities in the distribution of Ukraine’s economic wealth. It was also easier to postpone difficult decisions to restructure the nation’s economy and incur the costs involved in giving Ukraine the economic base required for stabile political independence and sovereignty. Ukraine’s leaders and elites on all sides have a heavy burden before their people in letting conditions reach today’s unpredictable and unsettling circumstances.

But outsiders also bear a heavy share of responsibility for Ukraine’s tragic political failures. Since independence, foreign leaders, well-meaning development advocates, expatriate communities, and financial managers in the United States, Europe, and Russia have treated Ukraine as an object of geo-political rivalry. With few exceptions, they have fostered and amplified the idea that Ukraine’s existential and most pressing issue has been to choose between “East” and “West.”

More from GPS: 2014 not looking so good for Putin

To gain advantage in this “game” they have cajoled, threatened, rewarded, promised, warned, and offered in order to attract or dissuade Ukraine’s leadership from moving in either direction, and they provided Ukraine’s leaders with ready-made excuses for failing to define their own course or make needed decisions and compromises. Last year’s ill-fated efforts by the EU (with American backing) to draw Ukraine to decide for the West via the Eastern Partnership Agreement, and Russia’s efforts to induce or cajole the country to become a partner in Russia’s Eurasian Customs Union/Eurasian Union, represent the most recent – and it has now become clear – the most consequential episode in this drama.

For the moment, Ukraine’s prospects and future are as unpredictable as they are problematic. Divisions are deeper in the country than they were before the latest violence. Healing the results of bloody street fights, escalating harsh rhetoric, and demonization of each side by the other will demand commitment and determination by all involved – including the country’s political and business elite, its academic, cultural, and religious institutions, and its intelligentsia. It will take maximum effort by all these actors to heal and build at home, to ensure that those today pushing agendas that will further split Ukraine (e.g. reopening the linguistic wound) gain no traction, and giving Ukraine the opportunity to shape a more secure and peaceful future.

But no less important at this moment will be the response of those outside Ukraine.  For them, a deep look inward at the policies and actions they have followed in response to Ukraine’s geo-cultural schizophrenia is overdue. If events of the past days say nothing else, they confirm the absence of consensus among Ukraine’s people and elites about their country’s future.  There is no consensus about direction, relations with neighbors, or domestic development model.

Efforts by both western and eastern neighbors to force the pace toward such consensus or to direct its outcome have clearly failed to avoid catastrophic results, and have contributed to the threat of an unstable nation in the heart of Europe or worse. That outcome serves neither the interests of the United States nor the European Union nor the Russian Federation. In the circumstances, it is in the fundamental interests of all to set at the forefront peaceful reconciliation within Ukraine, development of its economy in a manner that prevents dependence on subsidy from any quarter, and stabilization of the political life of a nation. This is vital to security for the entire Euro-Atlantic region – a peace in the heart of Europe.

Ukrainians themselves will determine whether their next experiment in creation of a new state can proceed constructively. But outside neighbors and partners will continue to have influence over how the process unfolds. A continuation of past policies pressing Ukraine to choose between East and West will almost certainly make this process more difficult and fraught. An approach providing Ukraine with breathing room and time is more likely to create a favorable environment for a positive outcome from Ukraine’s next stage. Such a policy would serve the interests of Russia, the EU and the United States.

Ukraine’s agony over recent days and weeks has clearly demonstrated the danger of continued failure to address the underlying issues that face the country. The hope for the future is that Ukraine’s citizens can focus on their shared needs and national interest – and that its neighbors will cooperate to encourage their success.

Topics: Protests • Ukraine
Next entry »Should Spain rethink its late night lifestyle?
« Previous entry2014 not looking so good for Putin

Next entry »Should Spain rethink its late night lifestyle?
« Previous entry2014 not looking so good for Putin