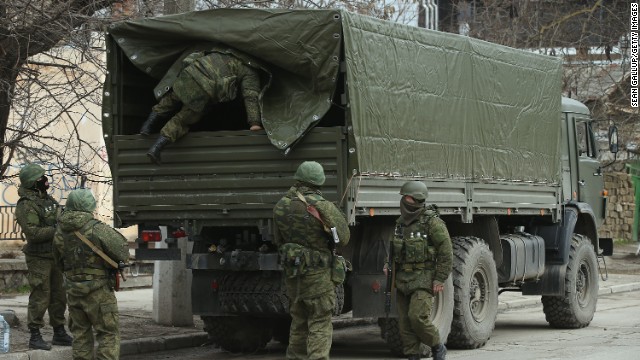 Why is Russia moving so fast?

By John Lough, Special to CNN

Editor’s note: John Lough is an associate fellow on the Russia and Eurasia Program at Chatham House, a U.K.-based think tank. The views expressed are his own.

The speed of Russia's actions in Ukraine has taken many by surprise. While the methods have been seen before – notably in Moldova and Georgia, where Moscow has openly backed separatist regimes with military and economic support – Russia's apparent backing of Crimea's government against the new authorities in Kiev crosses a significant threshold.

Since the breakup of the Soviet Union in 1991, Russia has never challenged Ukraine's independence in such a way. But Russian intervention in Crimea over recent days, and the decision today by the Russian parliament to give President Vladimir Putin the authority to deploy additional forces to Ukraine to protect Russian citizens, marks a significant escalation of the crisis in Ukraine.

Indeed, the reality is that if these plans are enacted, they would signify a violation of Ukraine's sovereignty and territorial integrity. In other words, this would in essence be a declaration of war, and would demonstrate Russia's readiness to disregard the principles of the post-Cold War security order enshrined in the 1990 Paris Charter, as well as its commitment in the 1994 Budapest Declaration to respect Ukraine's independence.

The decision appears reckless and, unlike previous occasions, does not have even a fig leaf of legitimacy. The new authorities in Kiev have not threatened or used force against Crimea, nor have they shown any intention to endanger the lives of Russians in Ukraine.

So why has Russia moved so fast?

Moscow's readiness to escalate the crisis in Ukraine reflects panic at what it undoubtedly sees as a potentially dramatic loss of influence in the country as a result of the "Maidan" revolution. It has calculated that the risks of not intervening in Ukraine are greater than those of intervening, even though those risks include the danger of provoking widespread violent conflict and a serious breakdown in relations with the West.

Regardless, Russia's earlier strategy is in shreds. It bet heavily on the survival of Ukrainian President Viktor Yanukovych, in effect offering him late last year a $15 billion bailout package and other sweeteners in return for not signing an association agreement with the European Union.

Russia looked to have outmaneuvered the European Union and to have kept Ukraine firmly in its sphere of influence. After all, the association agreement with the EU, if implemented, would have laid the foundations for anchoring Ukraine in the west.

Since then, however, Moscow has been stunned by the speed at which Yanukovych's rule collapsed. It blames the West for fomenting the revolution and seems to believe that it needs to counter an unprecedented surge of Western influence in Ukraine and prevent the consolidation of the revolution.

By signaling its readiness to support the secession of Crimea, Moscow is opening the door to further unraveling of Ukraine by encouraging supporters of closer ties with Russia in Ukraine's eastern regions to call for Russian protection and not to recognize the authority of the interim government in Kiev. All this could easily make it impossible to hold the presidential election scheduled for May 25 in those parts of the country that identify strongly with Russia.

The scenario of Ukraine's partition has moved significantly closer.