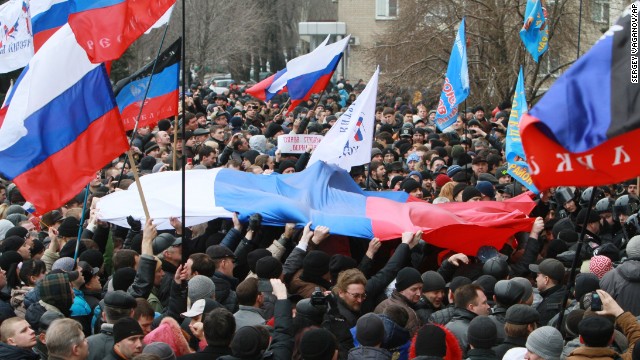 U.S. credibility at stake in Ukraine

Editor’s note: Andrew C. Kuchins is a senior fellow and director of the CSIS Russia and Eurasia Program. You can follow the Center for Strategic and International Studies @CSIS. The views expressed are his own.

Vladimir Putin has dramatically raised the stakes with what amounts to a stealth annexation of Crimea this weekend, securing in the process a unanimous vote from the Russian parliament allowing for the deployment of Russian military forces in Ukraine.

To date, the Obama administration's response, including Friday's vague warning about "costs," has amounted to little more than a threat to boycott the G8 meeting taking place in Sochi in June. Did the president's team forget that Putin did not even show up when Obama hosted the G8 in 2012? Was that not a crystal clear message about what Putin really thinks about the G8 in general, and Obama in particular?

Regardless, the administration has clearly been caught flat-footed again by Putin. It is less clear, though, how the United States will respond.

What has taken place over the past two days merely underscores in the most urgent way that we must, together with our European allies, immediately step up with economic and security assistance to bolster the capacity and credibility of the interim government in Kiev. And in doing so, the Obama administration must abandon its oxymoronic inclination to "lead from behind" because the imminent danger is that of a broader use of military and quasi-military tools to effectively separate other eastern regions of Ukraine from the rest of the country. This would have disastrous consequences for Ukrainians and U.S. credibility around the world. Just imagine, for example, the takeaway for Japanese and Chinese leaders about U.S. commitment as they spar in their own territorial dispute.

Yes, Crimea may already be gone. But we have to make absolutely clear – and in the most credible way possible – that Russian military intervention in other regions of Ukraine is a red line that will mean war with Ukrainian and NATO military forces if it is crossed. U.S. and NATO naval forces need to be deployed to the Black Sea in close proximity to the Ukrainian Coast. Military forces of neighboring NATO member countries, meanwhile, should be deployed closer to the Ukrainian border.

This all presupposes that the government in Kiev will request such support, and that Ukrainian military forces, which have been largely absent for the past two days, also need to be ready to be deployed. If Ukraine's military and/or NATO is not prepared to take such measures, then we are simply letting ourselves look foolish with empty threats. But doing nothing would be a terrible misjudgment. Putin has proven agile in asserting Russian interests, and for the West to be effective in its response will require immediate, focused, and forceful action to make Putin recalculate his risk/reward equation.

In addition, the U.S. should work with its European allies to flesh out a package of economic assistance for the interim Ukrainian government. Significant commitments of money must be made immediately available to demonstrate a commitment to Ukrainians. Of course, Moscow and Kiev both have enough historical experience to be highly skeptical that we are ready to make significant financial commitments to Ukraine – that is the core factor that ignited this crisis back in November of last year. And Washington and the EU also have plenty of reason to doubt that any Ukrainian government can sustain its commitment to deep and sustained economic reforms that will get to the root of the endemic corruption among Ukrainian elites that has left its economy so weak and vulnerable.

But while such doubts are understandable, we must force ourselves to make the leap of faith that this time Ukraine will get it right, and the West should hope that the very real threat of the fragmentation of the country creates the sense of crisis necessary to break down the old patterns of behavior.

Ultimately, time is of the essence. And although the reality is that many Americans might feel perfectly able to live with a Ukraine without Crimea, any further fragmentation could be catastrophic not just for those living in Ukraine, but also for European security and the credibility of the U.S. commitment to it. Even if Ukraine is not at the center of Europe, it is still a part of it, and our failure to defend its sovereignty in this time of need could prove to be the final blow for a NATO that has in recent years struggled to find its place in the world.

Directly confronting Putin would not be as risky as many fear – Putin is, after all, a calculating opportunist who will take advantage of weakness where he sees it. He is extremely unlikely, therefore, to risk war if he clearly understands the "cost" of crossing a real red line. The question is whether he has any belief that the United States and its allies will step up.

I hope, for the sake of Europe’s security, that President Obama proves him wrong.

Click here to cancel reply.
Next entry »Zakaria: Men in ski masks not the answer in Ukraine
« Previous entryHow U.S. should respond to Russia