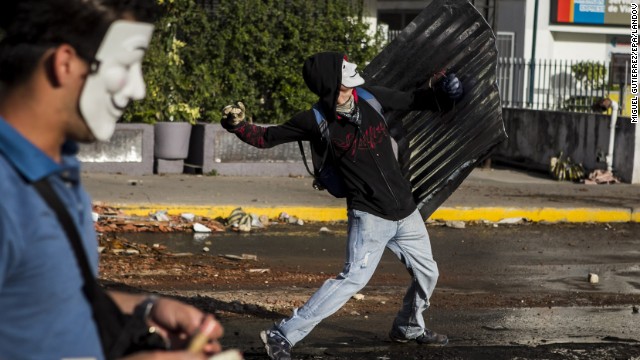 After a year without Chávez, is Venezuela unraveling?

By Carl Meacham, Special to CNN

Editor’s note: Carl Meacham is director of the Americas Program at the Center for Strategic and International Studies (@CSIS) in Washington, DC. The views expressed are the writer’s own.

This week, amidst political turmoil that has gripped the country and left more than a dozen dead and hundreds more injured and detained, Venezuela commemorated the passing of President Hugo Chávez.

Chávez was best known for his “Bolivarian Revolution,” through which he pursued aggressive, state-centered approaches to alleviate the social, political, and economic challenges facing Venezuela. And by some metrics he was successful – between 2004 and 2012, the country’s poverty rate halved, and literacy and access to healthcare increased substantially.

But Chávez also left behind a country deeply divided along political and socioeconomic lines, one suffering from skyrocketing crime and violence and bogged down by economic instability. Is his successor, Nicolás Maduro, now reaping the seeds of discontent sown by Chavismo?

Certainly, under Maduro the grim reality of rising crime has only worsened – though not for a lack of official policies aimed at reversing it. In his first year, Maduro dispersed thousands of troops through the country’s most dangerous areas as part of a crime-reduction strategy. He also requested special powers to rule by decree in order to fight corruption and economic troubles – a measure eventually approved by the National Assembly.

The latter is particularly reminiscent of his predecessor’s leadership. Indeed, during his presidency, Chávez requested the same decree powers on four separate occasions. And Maduro’s rhetoric has been largely in line with Chávez’s, accusing the U.S. government of meddling in Venezuelan affairs and labeling opponents of his administration “fascists” and “Nazis.”

Yet despite the mimicry of Chavez’s rhetoric and style, Maduro has struggled to live up to the legacy of his predecessor and mentor. Violence and corruption continue their steep rise, and Venezuela’s economy is wracked by instability. Inflation is sky-high (though the exact figure remains a subject of heated debate), and widespread scarcity of basic goods is rapidly hitting standards of living throughout the country.

All of these woes came to a head early last month, when students began protesting in a number of Venezuelan cities, focusing primarily on crime and insecurity. The government’s response was swift and aggressive, detaining students for their participation. In response, the demonstrations grew and spread, expanding their focus to corruption, human rights abuses, and economic concerns. Since then, the situation has only worsened. The confirmed death toll has reached 18, with over 250 injured and around 1,000 detained by government forces. Some reports of gruesome torture are beginning to emerge as well.

The media, meanwhile, has been subject to some harsh government censorship. For example, the government first cut the feed for Colombian NTN24, one of the only international media outlets operating on the ground, before later blocking picture services on Twitter as well. Most recently, the government revoked press credentials for CNN journalists in Venezuela before backtracking on the threat.

As daily violence and clashes continue throughout the country, many are reminded of the infamously brutal riots that paralyzed Venezuela’s capital in the late 1980s – the Caracazo. And while it’s evident that what the country is witnessing now is nowhere close to the crisis that struck Caracas almost 30 years ago, it’s important to note that recent developments signal a genuine shift in the way the opposition deals with the government – and vice versa.

So, what is at stake, for both Venezuela and the region as a whole? There are six things to keep in mind:

- As the crisis has deepened, divisions within the ruling party have increased – as has internal disagreement within the opposition. Without a stabilizing force in Venezuela, both major political groups appear to be unraveling, putting the government’s viability at serious risk.

- The military has long played a prominent role in Venezuelan politics. They have pledged their loyalty to Maduro, but as political unrest continues, it remains to be seen just how steadfast they will be behind the embattled president.

- PDVSA (Venezuela’s state-owned oil firm) and the Petrocaribe oil assistance program are among the most vulnerable if Venezuela implodes – a collapse that would, without doubt, send shockwaves throughout the hemisphere, particularly with the Central American and Caribbean countries most dependent on Venezuela’s oil assistance, namely Cuba.

- Such a heavy imbalance in the region could also invite criminality and increased drug trafficking – and even destabilize the already tenuous peace negotiations in neighboring Colombia.

- ALBA would also be in a dangerously vulnerable position, as the regional bloc is largely driven by the current Venezuelan government’s ideological zeal.

- Venezuela’s role as the fourth-largest oil exporter to the United States, a guarantor of the ongoing peace process in Colombia, and a key point of transit for transnational criminals transporting illegal narcotics make it still more pivotal to stability – both in its own neighborhood and in the region as a whole.

Despite these significant possibilities, much of the region has remained quiet even as potential paths toward a peaceful solution remain a hot topic of debate. The ALBA and Mercosur blocs (to no great surprise, given their close ties) have indicated their support for the Maduro administration. The Obama administration, meanwhile, has remained noticeably tempered in its remarks regarding the crisis, although some political voices in the United States believe that Venezuela’s crisis requires a strict sanctions regime. U.S. Senators Marco Rubio (R-FL) and Robert Menendez (D-NJ), for example, recently proposed a bipartisan resolution urging President Barack Obama to “impose targeted sanctions, including visa bans and asset freezes, against individuals planning, facilitating, or perpetrating gross human rights violations.”

Such a targeted proposition could be effective in helping moderate the Venezuelan government’s response, although any measure broader than this use of sanctions risks exacerbating the country’s economic instability, in turn creating an even more challenging situation for the Venezuelan populace – not just the government.

Regardless of what the U.S. does, it’s clear that what began as a series of student demonstrations in Venezuela has, over the course of just a few weeks, grown into a protracted conflict, splintering the country and spilling blood – and Maduro’s ineffective response to the protests, and the genuine opposition they represent, has allowed for the development of an increasingly complex crisis with ever more grim prospects.

But with the global community understandably focused on Ukraine, there is a risk that Venezuelan protestors’ concerns will fall on deaf ears. True, Russian involvement in the Ukraine – and the implications that carries for U.S. foreign policy – makes that crisis an inherently global one. Yet as the Ukraine destabilizes Eastern Europe, so too does Venezuela destabilize the Western Hemisphere.

The reality is that energy, human rights and regional stability are all on the line right now. Sadly, with most of the world’s attention focused elsewhere, it’s increasingly likely that for now at least the political crisis and injustice currently tormenting Venezuela will continue – and that Venezuelans’ plight will go largely unnoticed.

Topics: Latin America • Venezuela
Next entry »Time for Pakistan's leaders to stand up for women
« Previous entryZakaria: Sanctions against Russia are just symbolic

Next entry »Time for Pakistan's leaders to stand up for women
« Previous entryZakaria: Sanctions against Russia are just symbolic