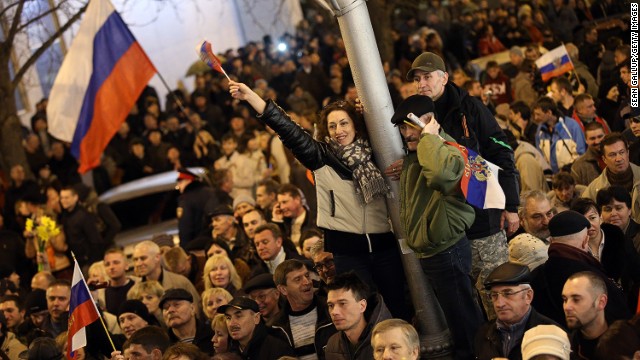 CNN speaks with Fareed Zakaria about the latest developments in Ukraine, newly announced sanctions against Russia, and what the United States can and should do moving forward.

Exactly, because if we believe that the people's voice should be heard, the people of Crimea should decide what they want. As has been said, it’s 60 percent Russian majority – there's a large group of people who are historically tied to Russia.

Remember, Crimea was part of Russia until 1954, and it was gifted in a kind of internal transfer, because it was all part of the Soviet Union. Khrushchev, the then-Soviet leader, transferred Crimea from Russia to Ukraine, but all within the one country, the Soviet Union. So, it sort of stayed part of Russia until 1991. This means Ukraine hasn’t really had Crimea that long.

What's likely to happen is a referendum would go in the direction of Russia, and the Ukrainian parliament would not accept that referendum. And so then what you have is two different legal realities, but the political and military reality, of course, is that Russia will have taken over Crimea.

How will the United States justify the sanctions that we have, the rhetoric that's coming out of the White House now, if the people in Crimea say they want the Russian troops there, that they want to be part of Russia?

Part of the problem here is that everything has happened so fast, in a crazy revolutionary fashion, that nobody is really following the law perfectly. So, an elected Ukrainian president was deposed, essentially by street gangs and protests. Very heroic, but this guy was elected.

Now, Crimea is claiming they can hold their own independent referendum, which technically is not allowed. The Ukrainian constitution requires that a referendum has to be held in all of Ukraine.

More from CNN: Does China have an ally in China?

When law gets murky, I always think you look at where the troops are, you look at where power is. And Russia has the power. And whatever the sanctions we put in place, they're not going to be enough to deter them, because this is vital to them. This is part of their vital national interest. And this is where the West made a mistake – we didn't recognize that Ukraine was a peripheral issue for us and even for the Europeans, but for Russia it's at the absolute heart of Russian power.

Are the new sanctions announced today by the U.S., including against people and entities that they say are behind this crisis, symbolic or does this hurt Putin?

They're symbolic. It's very tough to do sanctions when they're not comprehensive and when they are not complete, by which I mean, you need to have everybody participating. That's why the Iran sanctions worked because the Obama administration went to the U.N. They got the neighbors to agree. They got the Chinese and the Russians to agree.

In this case, Europeans are not buying into these sanctions because they need Russian natural gas. They need the electricity, the power, too much to agree. The Chinese haven’t come on board. So, these are unilateral American sanctions. They're also not complete, because they don't really involve the heart of Russia's power, which is its oil and natural gas.

So, when you have leaky sanctions like that, historically, they rarely work.

What can the U.S. do to influence European leaders to get into this sanction game?

I think what we have to recognize is we're not going to get a perfect solution in terms of trying to make Russia pay a price for what's happened. So what we're going to have to do is fire on multiple fronts and hope that in doing so collectively you force the Russians to pay a price and ask themselves, was this worth it? Is it worth some kind of a political settlement? Is there an off-ramp?

But there is no silver bullet. The silver bullet would be a complete set of sanctions that involves oil and natural gas. And that isn’t going to happen. It would involve U.N.-oriented sanctions, because that's international. But the Russians have a veto in the Security Council. So, you're already in the realm not of second best, but of third, fourth, and fifth best options.

But you have made a case that Russia is not necessarily in a better place than it was, in a geopolitical sense, two weeks ago.

Think about it. Putin will have Crimea. But as a result, many Ukrainians now hate him and hate Russia, and this prize of Ukraine has slipped out of Russia's control.

Poland, which had warming relations with Russia, is now calling emergency NATO meetings. So are the Hungarians, the Czechs. The chancellor of Germany says Putin is delusional, so trade is going to dry up or at least slow down between Russia and Europe. The United States has imposed sanctions. The Chinese are looking at him warily. The Turks, his other neighbors, are worried.

All this and what does he get? He gets Crimea, which, by the way, has a 15 percent Muslim population that is part of an insurgency that he's been battling in the Caucuses anyway. This is really a good example of what John Kerry calls "19th century thinking." You know, you got some piece of geography when what you really need is peace, stability, trade, commerce to build the wealth of your country.

Next entry »After a year without Chávez, is Venezuela unraveling?
« Previous entryPutin tactics don't bode well for Russia