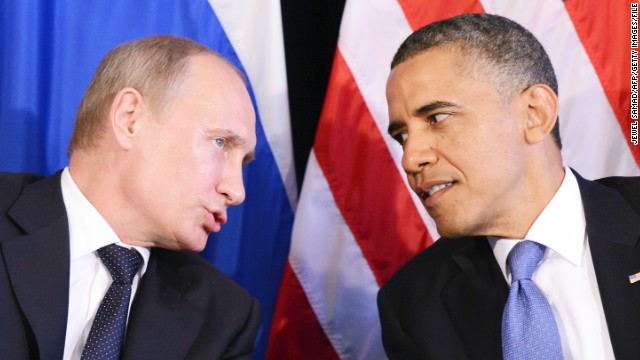 Enough with the tough guy debate

For more on the latest developments in Ukraine, watch a special live edition of "Fareed Zakaria GPS," this Sunday at 10 a.m. and 1 p.m. ET on CNN.

Inevitably, the crisis in Ukraine is being discussed in Washington largely through the lens of political polarization. It seems like any and every topic is fodder for partisan dispute these days, even the weather – actually, especially the weather.

Many Republicans are arguing that Russian President Vladimir Putin intervened in the Crimea region of Ukraine because of President Barack Obama's weakness. Putin saw that Obama didn't want to go to war in Syria, for example, and this emboldened Putin.

Well, who knows right? It's tough to know what would have happened in an alternative universe. Imagine that we still had Putin around in charge of Russia, but imagine he faced a different president, one who was tough, aggressive, who had no compunctions about invading countries.

Oh wait, we ran that very experiment in 2008! Putin faced George W. Bush, a president who had invaded Afghanistan and Iraq for good measure (and, in the latter case, defying massive international pressure and opposition). And yet, Putin invaded Georgia. And not, as he did this time, in a stealthy way with soldiers who were already there who simply switched their uniforms. He sent in Russian tanks roaring into Georgia and – without any referendums – simply annexed two pieces of that country.

Does this prove that Bush was a wimp after all? No it doesn’t. You see, there has been some very good and careful scholarship – by Daryl Press and Jonathan Mercer among others – that looks at historical cases to figure out whether having a reputation for "toughness" actually deters your opponents from doing bad things – like invading countries.

In general, the answer is, no.

Countries make these decisions based on many factors. But the most important ones seem to be a careful analysis of the power dynamics of the specific case. So in Ukraine, Russia would ask, is this a vital interest of the United States? And what is Washington's capacity to act in this particular situation?

More from CNN: 5 lessons for a new Cold War

In other words, Putin would look at his cards, look at Washington's cards, and the specifics of the situation in Ukraine rather than assuming that because Bush invaded Iraq, he would defend Georgia, or that because Obama didn't invade Syria, he would do nothing about Ukraine.

Politicians in Washington are convinced that Putin was encouraged by Western weakness. But it's actually quite possible that Putin felt he was acting to stop the West's growing strength. After all, just look at the situation from Russian eyes.

In 1991, Moscow gave up its 75-year-old Soviet empire. It also gave up large parts of its 300-year-old Russian empire including Ukraine. Since then, its historic rival, NATO, has expanded closer and closer to Moscow's borders. And then, the West encouraged Ukrainians to take to the streets and depose their president, who had close ties to Moscow.

Now none of this excuses aggression or justifies Putin's thuggish response. But if we are going to find a political solution in Ukraine that will stick, we need to recognize that the issues at stake are not personal – and that they are much larger than Obama's alleged weakness and Putin's paranoia.

Next entry »Will Dalai Lama meeting hurt Sino-U.S. ties?
« Previous entryTime for Pakistan's leaders to stand up for women