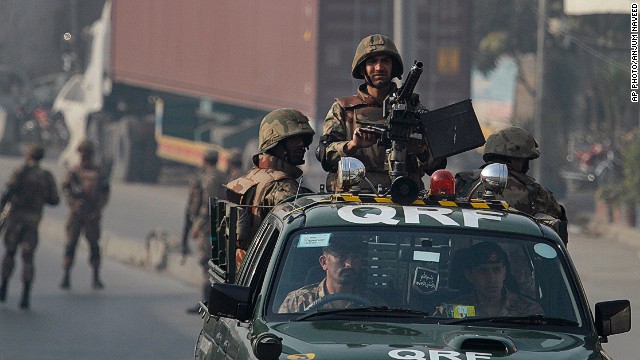 How Pakistan moves against Taliban could complicate Afghan ties

By Frederic Grare, Special to CNN

Editor’s note: Frederic Grare is a senior associate and director of the South Asia Program at the Carnegie Endowment for International Peace. The views expressed are the writer’s own.

Pakistan’s military is set to launch a major military operation in North Waziristan, AP reported this week, after weeks of hesitation over its strategy of negotiating with Tehrik-e-Taliban Pakistan (TTP). Yet although the expected operation follows the killing of 23 Pakistani soldiers last month by a Taliban faction, it seems likely to have been motivated by something more than a desire to retaliate and coerce the TTP into talks.

Whatever the motivation, it will have a significant impact on the country’s relationship with its weaker neighbor: Afghanistan.

In early 2012, Pakistan’s Foreign Office publicly declared a “strategic shift” in its thinking on Afghanistan, and began promoting its own version of an inclusive reconciliation process, as well as actively reaching out to elements of the Northern Alliance. Islamabad adopted this new policy after concluding that its strategy of supporting the Taliban alone was unlikely to produce a “friendly” Afghanistan (in other words, one under close Pakistani influence) because the Taliban is, for now at least, simply not capable of taking the reins of power on its own.

More broadly, the shift seems to reflect a perception in Pakistan that the Taliban are no longer a reliable proxy, although Islamabad appears to still believe that the Afghan Taliban would be able to secure Pakistani interests in Kabul. Now, Pakistan appears to be trying to broker a power-sharing agreement in which its proxies would dominate the east and the south of Afghanistan in exchange for their non-interference in the areas dominated by other ethnic groups. A national unity government that emerged from such an agreement would not be strong enough to prevent Pakistani maneuvering in Afghanistan.

According to Pakistani officials and analysts alike, the main rationale for the shift is domestic security concerns, including significant worries over the TTP. Since the TTP operates from the FATA and Afghanistan, Islamabad worries that the movement may collude with the Afghan Taliban. But this introduces a major contradiction in Pakistan’s Afghanistan policy as it will only exacerbate the very threats it is trying to eliminate. After all, if the Afghan Taliban is frustrated in its aspirations to gain power in Kabul, as it might well be under the Pakistani proposal for inclusive negotiations, it could join hands with its Pakistani counterparts to seek a limited version of “Pashtunistan,” based on an ideological version of Pashtun nationalism. The fact is that even a limited operational alliance between the Afghan and Pakistani Talibans would create a serious headache for Islamabad, and could even increase the risk of conflict between Afghanistan and Pakistan.

To complicate matters further, Pakistan cannot expect to quash the TTP without Afghan cooperation. Faced with Pakistani pressure, the TTP will inevitably seek refuge in Afghanistan, and recent Pakistani actions cannot on their own seal the border between the two countries.

Afghanistan, of course, has no incentive to help Pakistan without a credible guarantee of non-interference from Islamabad, and the dynamic between these two countries also has implications for the United States, reducing its freedom to maneuver diplomatically. Having asked Pakistan to intervene in North Waziristan to eliminate al Qaeda and its proxies for years, the U.S. can only approve of the operation. Yet helping Pakistan get its way without obtaining any of the non-interference guarantees that the Afghans legitimately desire would diminish the potential for Afghan-Pakistani cooperation. This in turn would heighten the risk that terrorist sanctuaries could re-emerge, undermining more than a decade of counter-terrorism efforts.

Ultimately, the reality is that coalition forces along the border have been unable to stop Taliban infiltration, meaning it is highly improbable that Afghan forces will perform any better on their own. More likely, the security situation will deteriorate on both sides of the border. And given Pakistan’s current policy toward Afghanistan – and despite any official rhetoric to the contrary – the country is likely to view continuing low intensity conflict in Afghanistan as a necessary step.

Pakistan might suggest any new offensive is simply a response to recent events. But whatever the trigger, it is clear that there will be significant strategic ramifications.

Topics: Afghanistan • Pakistan • Taliban
Next entry »Book of the Week: The limits of partnership
« Previous entryOn GPS Sunday: Live analysis on the latest developments in Ukraine

Next entry »Book of the Week: The limits of partnership
« Previous entryOn GPS Sunday: Live analysis on the latest developments in Ukraine