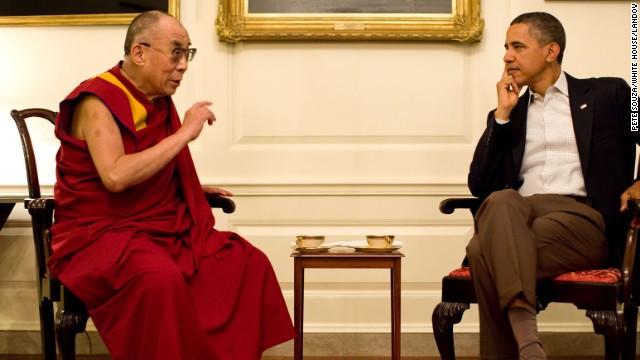 GPS intern Aakanksha Tangri speaks with Robert Oxnam, President Emeritus of the Asia Society, about the Dalai Lama’s recent visit to the United States, and what it could mean for relations with China.

What are the likely short-term and long-term impacts on U.S.-China relations after President Barack Obama’s meeting with the Dalai Lama?

Of course, the Chinese always protest loudly on these occasions because they have a strong interest in asserting Chinese sovereignty over what they call the Tibetan Autonomous Region.  But since Obama explicitly said that neither the United States, nor even the Dalai Lama, wants full independence for Tibet, the sovereignty issue was sidestepped.

I think that Obama was quite correct in asserting his support for Tibetan human rights issues and also properly calling the Dalai Lama “an internationally respected religious and cultural leader.”  By contrast, the Chinese leadership calls His Holiness a “wolf in sheep’s clothing” and head of the “Dalai Clique.”

Should we be reading anything into the White House hosting the Dalai Lama in the Map Room instead of the Oval Office?

I wouldn’t read a lot into the choice of the Map Room. I suppose it conveyed a slightly-less official venue, but it wasn’t a blatant snub of the Dalai Lama, nor was it likely to placate Chinese critics.  Certainly it was not designed, as some have suggested, to indicate that Obama was trying to redraw the map of China.

Hua Chunying, a Chinese foreign ministry spokeswoman, said in a press briefing that “Any country bent on impairing China's interests will find its own interests get hurt in the very end, and its relationship with China will be damaged.” Is this just talk or will there be retaliation toward America from China’s side?

So far, there is no indication whatsoever that the Dalai Lama’s visit to the White House has led to a deterioration in U.S.-China relations. In recent days, China has had high-level military talks with the U.S. Army Chief of Staff Ray Odierno. And it appears that President Obama and President Xi Jinping will meet at a nuclear security summit in the Netherlands this month.

What role can cultural diplomacy playing in advancing U.S.-China relations?

Ever since U.S.-China détente in 1972 and normalization of relations in 1979, cultural diplomacy has been a crucial factor on both sides. By “cultural diplomacy,” I mean not just art exhibitions, performing art exchanges, and sports events, but also the enormous flow of people and information between our two governments and our two societies. In so many ways, the U.S.-China relationship has been shaped by government-facilitated science and technology exchanges, student and scholar flows in both directions, trade missions and business connections. What I’m saying is that “culture” is how people relate and understand each other. In this sense, people-to-people diplomacy is critical to any diplomatic interaction and, in this respect, the U.S.-China relationship has been extraordinarily successful.

Let me also say that, ever since the famous opening relations back in the 1970s, both sides have become acutely sensitive to key issues – both the hot buttons and the soft buttons. Neither side has avoided speaking frankly about problem areas, but we’ve found ways to keep the relationship on track by coping with problems – including Taiwan and Tibet. So, the Dalai Lama’s visits to the White House under the most recent five presidents (Reagan, Bush 41, Clinton, Bush 43, Obama) always yields fiery responses from Beijing, but has never caused a deep disruption in U.S.-China relations.

Next entry »On GPS Sunday: Live analysis on the latest developments in Ukraine
« Previous entryEnough with the tough guy debate