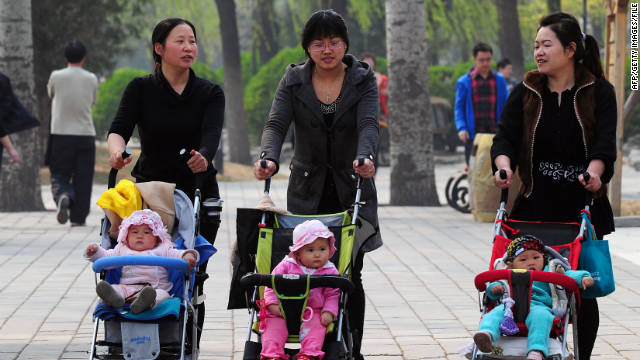 Much has been made of how China recently eased restrictions on having children. Under the old rules, if a couple wanted to have a second child, both husband and wife needed to be the only offspring of their parents.

Under the new rules, a second child could be allowed if just one of its potential parents was an only-child. The change impacts about 20 million Chinese. You'd imagine after decades of restrictions, many of them would jump at the chance to have a second child, right?

An article in The New York Times recently reports that as many as half of the families impacted by the new rules are balking at the idea of a second child. Parents quoted in the article say that children simply cost too much.

Why is this attitude surprising? And what went wrong?

It's simple: China is getting richer…and its women are getting more educated. According to the CIA, the five countries with the highest birth rates in the world include the likes of Niger, Mali, and Uganda. There's a clear correlation here: these countries have some of the lowest per capita incomes in the world – the average income in Niger is just $800 a year.

Now let's flip the numbers. The five countries with the lowest birth rates in the world include Monaco, Hong Kong, Singapore, and Japan. Now look at the average incomes. Monaco? $70,700! Singapore? $61,400. China clearly aspires to be in Monaco and Singapore's company…not Niger and Mali.

In addition to the wealth effect, studies show that the more educated women become, the less likely they are to have more children. This has happened across the world, in Europe and even in traditional Asian societies like South Korea.

China is the great historic anomaly. China's citizens have gotten as old as Europeans, well before they've reached European levels of wealth or education. And while China is not as rich as South Korea or Singapore, it has high and ever-increasing female literacy – the rate is now nearly 93 percent. So getting them to have more kids now might not be that easy.

Why is China an anomaly? Well, it's the only country that could pull off a central edict like the one-child policy. It was an unprecedented experiment in population control. The problem is that now China really needs young people – by 2050, about a third of Chinese will be over the age of 60.

What can Beijing do? Well, it is probably looking at experiments in the Western world.

Consider France, which in the 1990s realized it needed to boost fertility rates. The central government put in place a program of incentives including tax breaks for parents, subsidized housing, and access to child care. According to the Wall Street Journal, France spends 4 percent of its GDP on these programs – about twice as much as other rich countries.

If China wants its people to have more children, it may have to do a lot more than minor relaxations of the one-child policy. It might have to go in for a French solution.

Topics: China • What in the World?
Next entry »Zakaria: Putin improvising in Crimea
« Previous entryWest must do better on Ukraine than it did with Syria

Next entry »Zakaria: Putin improvising in Crimea
« Previous entryWest must do better on Ukraine than it did with Syria