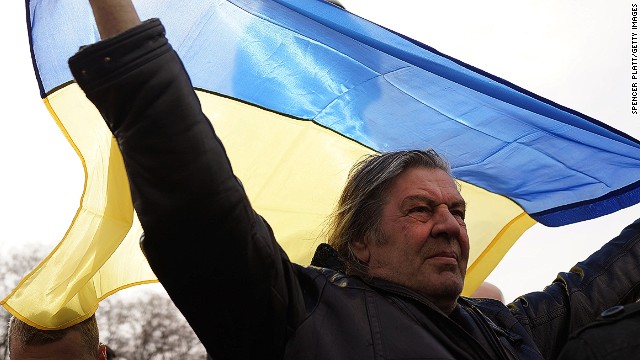 Ukraine crisis is not a game

By Ilya Lozovsky, Special to CNN

Editor’s note: Program Officer for Eurasia on Freedom House's Emergency Assistance Program. The views expressed are the writer’s own.

During a complex, fast-moving crisis such as the one now unfolding in Ukraine, it is tempting for some commentators to advocate taking the “long view.” This school of thought, which carries more than a whiff of Cold War nostalgia, reduces the struggle for Ukraine to a geopolitical game in which the various competing actors – the United States, the European Union and Russia – become featureless billiard balls ricocheting off each other. Ukraine becomes Russia’s “historical backyard,” or even worse, a subordinate part of its “legitimate sphere of influence” which we are urged to respect. Approaching the unfolding Ukrainian crisis in this way has the advantage of appearing sober, practical, and dispassionate. It is also dead wrong.

It is wrong because it treats Putin’s Russia, the European Union, and the United States as equivalent actors on the world stage – opposites, but equally legitimate – when in actual fact, these countries’ systems of government are profoundly different.  Russia is undemocratic, authoritarian, and endemically corrupt, its natural resources and immense human capital plundered by Putin and his regime.

The European Union, for all its considerable flaws, is a collection of open, liberal, democratic states, respectful of human rights and beholden to the rule of law. A worldview that equates these actors and condemns Ukraine as fated to be split between them in a kind of Solomonic compromise is deeply cynical. Moreover, it is precisely the worldview of Vladimir Putin. And that is not a worldview that we can afford to adopt.

More from CNN: How U.S. should respond to Russia

The protesters on Kiev’s Maidan and across Ukraine’s towns and cities did not brave the cold, the truncheons and the snipers because they have any great love for Brussels, or because they yearn to be in Europe’s “sphere of influence.” They did so because the abrogated association agreement represented an aspiration to turn away from Soviet systems of governance and develop Ukraine’s democratic institutions: an impartial, independent judiciary, a police force that protects its citizens, and an accountable government in which corrupt officials are exposed and punished, rather than allowed rob their people blind.

To Putin, similarly, Ukraine is not so much part of a historic sphere of influence as it is a bulwark against those transformations. Viktor Yanukovych’s inglorious departure exposed to the world how a corrupt leader can amass impossible riches in a bankrupt country where over a quarter of the population lives below the poverty line. The images of his opulence – a gaudy, palatial estate featuring a golf course, a classic car collection and a private zoo – are only a superficial embarrassment compared to what Ukrainian journalists digging through reams of previously secret documents will likely uncover. This is why the protesters came to the Maidan – both from Ukraine’s west and from its “pro-Russian” east. The word for “corruption” in both Ukrainian and Russian, as it turns out, is almost the same.

Naturally, no such public revelations will unfold in Russia while Putin remains in the Kremlin, just as none were possible while the Yanukovych regime was in power. Putin, we know, was watching, and the thought of independent journalists poring through his documents and gawking at his palace in the North Caucasus must be a sobering one. His regime – founded on misinformation, corruption, and naked power – is only a larger and more frightening version of Yanukovych’s. And if it ends, he fears, it will end in the same way.

Both Russia and Ukraine inherited the pathologies of the Soviet Union, which made such grand corruption possible. Only the development of modern democratic institutions can address this, the most fundamental grievance of the post-Soviet world. The struggle to develop these institutions and to make them sustainable is long and difficult – almost impossibly so. Ukraine’s previous pro-Western government, swept into power by the Orange Revolution, failed this challenge. Crucial reforms went unimplemented. Corruption remained endemic. The economy stagnated. And soon enough, this government, too, was swept out of power.

Is Ukraine’s new pro-Western government ready to succeed where its previous one failed? Putin’s goal is almost certainly to ensure that it fails, leaving the country what it was: a small, pathetic clone of his kleptocracy.  To do this, he has sent in Russian troops under laughable pretexts and provocateurs to stir up ethnic nationalism; he has unleashed the full might of his propaganda machine and raised the specter of fascism; he has lauded people waving the Russian tricolor in Ukraine while bundling anti-war protesters waving the same flag in Moscow into police vans. Bringing the Russian police state to Ukraine is not a legitimate exercise of Russia’s influence. It is an aggressive attempt to ensure that the new Ukraine repeats the mistakes of the old.

Yet if Ukraine’s new pro-Western government is ready to succeed, it is incumbent on the West to stand with them, not cower behind a more comfortable and historically palatable pretext. The focus must be not on placating Putin, but on helping Ukraine build institutions that will ensure respect for human rights, a fair market economy, and compliance with international norms. It is not by accommodating the most odious regimes, but by strengthening the most promising, that global liberal democratic norms will be advanced. So that one day, freedom will come not just to Kiev, Donetsk, or Sevastopol – but to Moscow.

Next entry »What I'm reading: Will Russia make a play in Kazakhstan?
« Previous entryZakaria: Putin improvising in Crimea