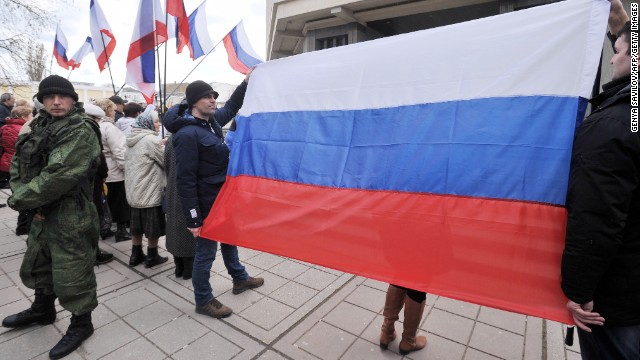 The Ukraine story no doubt has many acts still to play out, and what started in Crimea may yet spread to eastern Ukraine. Although the ultimate response from the West remains unclear, it already seems likely there will be few if any winners from this sorry episode. And regardless of what happens in the coming days and weeks, it is already apparent that the crisis has taken its toll on some key players in the court of international opinion: Russia, Russian President Vladimir Putin, Western solidarity and U.S. President Barack Obama.

Global publics were already divided in their view of Russia before the Ukrainian incursion – just 36 percent had a favorable view of Russia, while 39 percent saw it unfavorably in a 2013 Pew Research Center survey of 38 nations. In that poll, just 37 percent of Americans had a positive take on Moscow, while 43 percent saw it negatively. A subsequent, early February 2014 Gallup survey found that 60 percent of Americans had an unfavorable opinion of Russia.

Public judgment of Russia in much of neighboring Europe was even harsher: Almost two-thirds of French, 60 percent of Germans and just over half of the Poles surveyed gave Russia a thumbs down in 2013.

Much of the opprobrium toward Moscow last year reflected the relatively negative sentiments of those 50 years and older. Only 29 percent of Americans and Germans in this category, and just under a third of French saw Russia favorably. In contrast, half of Germans age 18 to 29, and almost half of young Americans held a positive view of Russia last year.

This youthful approval may ultimately be what Putin’s move has put at risk. After all, this is the next generation of Western voters and decision makers – young people who before the Crimean takeover were predisposed to see the Cold War as ancient history and to give the new Russia the benefit of the doubt.

The broad deterioration in Russia’s image may mean this is no longer the case, and Putin’s public standing in the West is also on the line.

Putin’s handling of the situation in Ukraine, and broad Western skepticism, suggests that his numbers may dip further in the West. In an early March survey by Infratest dimap for German public broadcaster ARD and newspaper Die Welt, just 15 percent of those polled said Putin was a reliable partner. Most of the rest said they believed that he would use any means at his disposal to promote Russian interests.

Of course, just because Russia and Putin have discredited themselves in the eyes of Western publics doesn’t mean that Europeans and Americans see eye-to-eye on what to do about Ukraine. Indeed, the much-vaunted spirit of Cold War solidarity seems conspicuously absent on the eve of what some analysts are dubbing a new Cold War.

Only 29 percent of the American public wants Washington to take a firm stand with the Russians on Ukraine, according to a new Pew Research Center survey, while more than half say that it is more important for the U.S. government to not get too involved in response to the situation.

A separate new CNN survey asked different questions, but found much the same public reluctance to do much. Roughly six-in-ten Americans in the CNN poll said they would support economic sanctions against Russia, but only 46 percent back economic aid to Ukraine and only a quarter supported military assistance.

The numbers in Germany suggest even greater wariness among the public there – just12 percent of Germans back military cooperation with Kiev, according to an early March survey by Infratest dimap for ARD and Die Welt, while only two-thirds said they favor economic sanctions against Russia. Moreover, three quarters opposed excluding Russia from the G8 group of advanced economies and 92 percent opposed severing diplomatic relations with Moscow.

President Obama, meanwhile, has also not weathered this storm well in terms of public opinion. Just 30 percent of Americans approve of the Obama administration’s handling of the situation involving Russia and Ukraine, according to the Pew Research survey, with 44 percent disapproving.

True, the crisis in Ukraine is not about Putin or Obama. It is not about Russia’s image or the Western alliance – it is about the integrity and national sovereignty of Ukraine. And Kiev has the most to lose.

Yet public opinion data suggest there may well be other global casualties from this crisis. And the perceptions of the actors involved in the future may depend very much on how the situation in the Ukraine unfolds in the coming days and weeks.

Topics: Russia • Ukraine
Next entry »Are more food protests around the corner?
« Previous entryWhat I'm reading: Will Russia make a play in Kazakhstan?

Next entry »Are more food protests around the corner?
« Previous entryWhat I'm reading: Will Russia make a play in Kazakhstan?