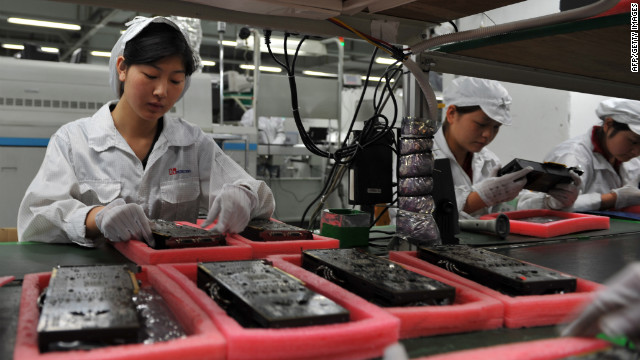 Book of the Week: The Leading Indicators

Fareed’s ‘Book of the Week’ is Zachary Karabell’s The Leading Indicators: A Short History of the Numbers That Rule Our World.  GPS's John Cookson spoke with him about trade with China and the troubles of telling just how well an economy is doing.

Last  year the United States imported $314 billion more in goods and services from China than it exported to the country. This trade deficit is cited  by some as an example of America’s economic  decline and China’s  ascendency. You say in the book, "not so fast."

I  do say, "not so fast" because I think we are calculating the way goods and products are made in a way that goods and products are no longer made.  The assumption that every product comes from one country is  simply not true.  It's something that many people who know this world better than I do have recognized and have tried to show the ways in  which an iPhone and iPad are made up of multiple components from many  different countries. If you were able to break down where the value of  each of these products goes you would find that it goes to lots of  different places, and it especially goes to whoever has created the  intellectual property in the first place. But most of that is invisible  for trade numbers. Because there isn't a system of breaking down every   manufacturing good in the world into its component parts, we end up  ascribing all the value to a country that has the factory, that did the  final assembly, missing out on all these other aspects of how goods  are  made.

You mentioned the iPhone, which of course advertises itself as being "Designed by Apple in California" and "Assembled in China."

The reality is that from a trade perspective and official trade figures there is no "designed in."

You  write that there are problems not only with measuring  trade, but also  with measuring the overall size of the economy.  Should  gross domestic  product (GDP) and other economic measurements be  replaced with something  different, such as a poll of how happy we are?

I  don't think replacing our numbers with other numbers is really  the  answer. A happiness index is appealing to people because it  purports to  measure the value of things, the value of life and the  quality of life.  But all it does is look at a different set of  variables than GDP.  There's no one number that can capture our  experience of are we  collectively and individually doing well. The kind  of will-o'-the-wisp  of we are going to find a number, a really simple  number, and if it goes  up that means we are all doing well and if it  goes down we are doing  badly – that's just silly on the face of it.

Considering   all the shortcomings of the measurements that are intended to tell us  how an economy is doing, how is the U.S. economy really doing?

There's  no one answer to that question. And granted, the world is  full of "one  answers" to that question. What I try to do in the book is  help us  understand that, first of all, the economy is just a creation  of  numbers. It isn't a physical, tangible entity that we can easily  measure.

There's a lot that GDP  doesn't include.  The  limitations of GDP have long been understood, but  the degree to which  we continue to cleave to it remains pretty much  unmitigated.I don’t  think there's an answer to  how the U.S. economy is doing unless one  starts becoming more specific.  What is the earning potential of most  people relative to their cost of  living?  How do we even decide what cost of living is?  Companies are  doing really well.  People who are  wage earners are not doing so well.  Both of those things are true,  while simultaneously the GDP could be  growing.  So, I don’t think there  are the answers we would like, which I  know is not nearly as  satisfying as if I could come up with the perfect  other number that  would then answer that question. But I think that's a  dream world  rather than the real world.

Topics: Book of the Week • Economy
Next entry »Don't forget about Venezuela
« Previous entryWhat I'm reading: A mother speaks out on India's Section 377