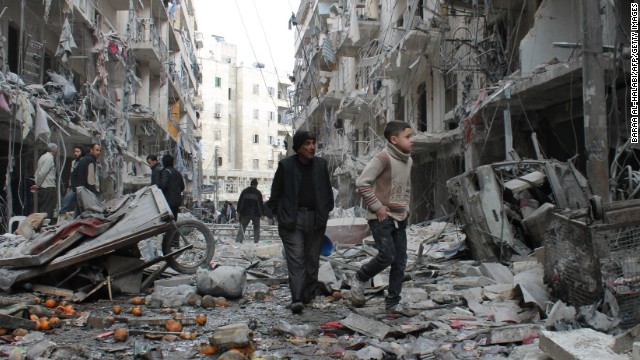 How U.S. can help Syria

By Faysal Itani, Special to CNN

Editor’s note: Faysal Itani is a resident fellow at the Atlantic Council’s Rafik Hariri Center for the Middle East. The views expressed are the writer’s own.

Three years into Syria’s civil war, the United States has demanded the regime shut down its U.S. embassy. But this month’s long overdue gesture is just the latest low-cost substitute for a meaningful U.S. policy in Syria, and is symptomatic of the U.S. approach to Syria’s tragedy, which prioritizes diplomatic posturing over engaging with realities on the ground. Indeed, as the United States focuses on international summits such as the recent Geneva II conference, it is ignoring the nature of the opposition in Syria itself.

It isn’t too late to change this approach, and to transform the U.S. goal of political transition in Syria from wishful fantasy to realistic goal. But to do this, American thinking needs to move from Geneva to the villages, towns, and cities of Syria

Early last year, Syrian rebels captured the northern city of Raqqa. After bickering with local councils over how to run the province, the U.S.-backed opposition coalition in exile (the Etilaf) named Abdullah Khalil, a human rights lawyer, to head an interim authority. On May 19, 2013, masked men reportedly kidnapped Khalil, and he has not been heard from since. His disappearance shows how the opposition, backed by the United States and its allies, has failed to build on its early successes in liberated territory, allowing the regime to survive.

The United States and its regional allies contributed to the opposition’s failures. They funneled money and weapons to individuals or families – often based on their political affiliations – instead of building broad local coalitions. Even worse, by failing to arm and finance them, they left their allies vulnerable to regime and rebel violence. They apparently didn’t realize that unprotected civilian councils stood no chance against the regime or extremists. As a result, whatever progress people like Abdullah made disappeared when they did. The moderate opposition’s collapse in Raqqa left a power vacuum that was quickly filled by the transnational jihadist group the Islamic State of Iraq and Syria (ISIS). The city’s luckless population traded the regime’s secular tyranny for a religious one.

There is a more effective way to help the Syrian opposition, alternatives to the single-minded, futile U.S. focus on high-level diplomacy. As Nathaniel Rosenblatt and I argue in a new Atlantic Council Issue Brief, a far more useful approach would be for U.S. policymakers to zoom in on Syria’s local realities in order to better understand the nationalist opposition and protect it against both the regime and sectarian radicals.

A closer look at Syria itself reveals there are no national-scale institutions that can make and enforce decisions on Syrians’ behalf. Beset by successive failures, disappointments and perceived abandonment by their ostensible Western allies, Syrians overwhelmingly reject the legitimacy of the U.S.-backed Etilaf, which claimed to represent them at the Geneva II conference. In civil wars, those doing the fighting and dying call the shots. In Syria, these include radical Islamist groups such as Ahrar al Sham and the al Qaeda-affiliate Jabhat al-Nusra, who have succeeded because of strong financial and military support from states and wealthy individuals sympathetic to their abhorrent ideology. U.S. policy will either have to engage with these radical militia or help build fighting coalitions capable of absorbing, coercing or destroying them.

Unless the United States prefers to let current rebel dynamics play out as they will – and the results thus far are not encouraging – its only alternative is to empower groups less unpalatable to U.S. interests and values. This would mean identifying, arming, training, funding, and advising select individuals and groups, in a manner that accounts for and works with, rather than against, local circumstances including tribal, family, sectarian, and other social realities. Only a broad rebel coalition with a strong on-the-ground presence would have the capability, agency, and incentive to bring about a political transition in Syria. Pretending the Etilaf is that coalition while bullying it to attend fruitless summits is unfair and dangerous.

Nurturing an opposition capable of fighting and negotiating on behalf of Syrians won’t be easy. It would take months to change the balance of power in Syria. Weapons and money aren’t enough: the opposition needs training and guidance on coordination, planning, tactics, and strategy. U.S. policymakers, meanwhile, would need to invest more time, resources, and energy in tracking and analyzing local developments, and asking difficult questions: Which rebel groups control which areas? Are they capable of holding them? How do rebel-rebel and regime-opposition relations vary across regions, or even neighborhoods? Which tribal leaders, influential personalities, groups, and institutions enjoy local respect and authority, and why? Are they protected from violence?

President Obama may not adopt this approach anytime soon given his ambivalence towards the utility of U.S. power and aversion to involvement in the Middle East. Yet there’s no other way to achieve political transition and weaken jihadist groups in Syria. If the president insists on focusing exclusively on low-cost, low-reward diplomatic theatre, Syria will continue descending into lawlessness and terrorism, causing untold suffering for Syrians, threatening neighboring countries, and fuelling regional sectarian violence.

Whether now or after President Obama’s term expires in 2016, the United States will be forced to engage with the Syrian conflict on a deeper level. Thinking local means accounting for reality in Syria as it actually is – that is, as Syrians are living and shaping it, and not as policymakers wish it were.