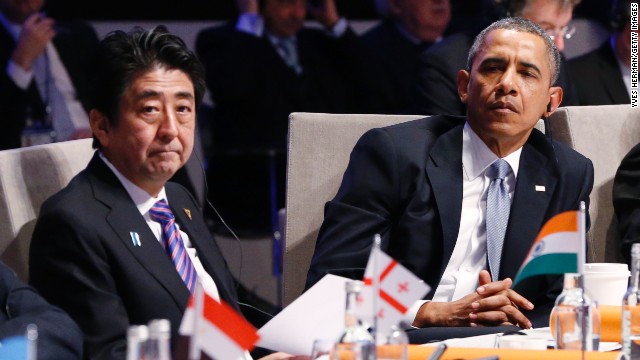 Why Obama and Abe should take lead on TPP

By Michael Green and Matthew P. Goodman, Special to CNN

Editor’s note: Michael Green is senior vice president for Asia at the Center for Strategic and International Studies and a professor at Georgetown University. He served on the National Security Council staff in the George W. Bush administration. Matthew P. Goodman, a former member of the NSC staff in the Obama administration, is chair in political economy at CSIS. The views expressed are their own.

Barack Obama has described himself as America’s first Pacific president. Prime Minister Shinzo Abe has pledged that Japan “is not now and will never be a tier-two country.” Before they meet in Tokyo this month, the two leaders have a unique opportunity to prove these words true by resolving their differences over the Trans-Pacific Partnership (TPP).

The 12 Asia-Pacific economies in the TPP negotiations are working toward a comprehensive, high-standard, “21st century” trade agreement. A TPP deal among a group of countries representing some 40 percent of the world economy would give a significant boost to global growth and jobs and help shape the rules of the international trading system for years to come.

The United States and Japan are by far the largest participants in TPP, accounting for three-quarters of the group’s economic heft. A TPP deal would effectively amount to a bilateral free trade agreement – a prize that has eluded the two countries for decades as they have sparred over trade and, more recently, pursued FTAs with other countries.

The stakes for both Japan and the United States could not be higher. First, the economic benefits of a successful TPP agreement would be substantial. The Peterson Institute for International Economics has estimated the annual income gains to the United States and Japan by 2025 at $76.6 billion and $104.6 billion, respectively.

Second, both countries have a shared interest in updating and upholding the rules of international trade and investment to meet 21st century realities. Washington and Tokyo have long been champions of intellectual property rights (IPR) protection, strong labor and environmental standards, and transparent regulatory practices. Through TPP, they have a chance not only to strengthen global rules in these areas, but also to create disciplines on new issues such as digital commerce and state-owned enterprises (SOEs).

Finally, TPP has enormous strategic significance for both countries. It would strengthen the U.S.-Japan alliance, embed the United States more deeply in the Asia-Pacific region, and underscore American and Japanese leadership in the region. By setting the gold standard for other major trade negotiations, including the Transatlantic Trade and Investment Partnership, as well as multilateral talks in Geneva, it would also reinforce the two countries’ leadership on the global stage.

The TPP negotiations have been slow going, with over 20 rounds and several missed deadlines since the talks were launched four years ago. Substantial progress has been made across most of the agreement’s 29 chapters, but differences remain on IPR protection, state-owned enterprises disciplines, environmental standards, and market access. One of the biggest remaining issues – of importance to most countries in the room – is greater access to Japan’s protected agriculture market.

The domestic politics of TPP are difficult for all 12 participating countries, not least Japan and the United States. Abe faces a formidable agriculture lobby and an array of pressing policy challenges, from restarting nuclear power to carrying out structural reform under his program of “Abenomics,” each of which will cost substantial political capital.

For his part, President Obama faces a U.S. Congress where the leadership of his own party has made clear they aren’t yet willing to give him trade promotion authority to complete TPP and where relations with the Republican leadership are toxic. The president has been reluctant to push for TPA ahead of mid-term elections in November, when the Democratic majority in the Senate is on the line.

But despite the difficult politics, now is the time for the two leaders to spend some political capital on TPP. They should both renew their commitment to the deal and show the flexibility needed to close the remaining gaps in the negotiating room.

President Obama should signal publicly – ideally through a speech on U.S. soil before he travels to Asia in late April – that TPP is critical to his strategy of “rebalancing” to the Asia Pacific and that he’s willing to push Congress for TPA after the mid-terms. This would reassure those at home and in the region who doubt his commitment to the rebalance and to trade, and also give other TPP negotiating partners confidence that Washington will uphold its end of the bargain if they reveal their bottom line now.

Meanwhile, letting TPP drag on indefinitely doesn’t serve the interests of Abe. His popularity, though still strong by Japanese standards, is already declining and likely to sink further as a consumption tax hike takes effect in April and he moves ahead on nuclear power. Abe should instruct his negotiators to move substantially closer to TPP’s principle of comprehensive liberalization, especially on agriculture, while he and his government have the political capital to do so.

In doing this, Abe can take comfort that the near-term economic benefits of TPP are greater than widely believed. In addition to improving Japan’s long-term competitiveness, a TPP deal would give a substantial boost to confidence, likely causing the Japanese stock market to soar as foreign investors who have become increasingly disillusioned with Abenomics pile back into the market.

Political leaders rarely have as promising an opportunity to achieve multiple objectives as President Obama and Prime Minister Abe have over the next few weeks. Coming together on TPP would help create growth and jobs in both countries, uphold the global rules-based order, and secure the two men’s legacies as visionary Asia-Pacific leaders.

Next entry »Could wind turbines tame hurricanes?
« Previous entryZakaria: Why Russia is spooked