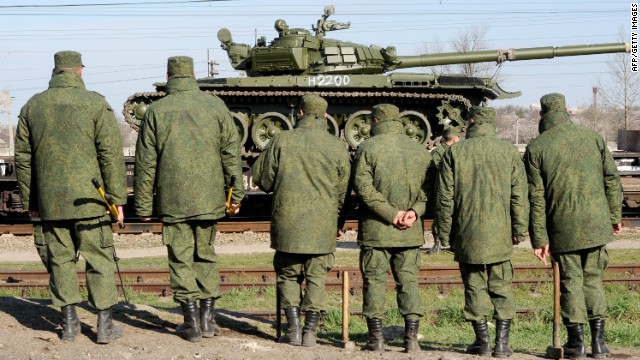 Zakaria: Why Russia is spooked

CNN speaks with Fareed Zakaria about the latest developments in the Crimea crisis – and whether Russia is serious about pulling troops back from the border with Ukraine.

One of the things John Kerry is now focused again on, in Brussels he is talking with NATO allies about what to do about the Ukraine and about what's going on with Russia. I want to get your take on a few headlines that have come out. But what do you make of the fact Vladimir Putin reportedly called German Chancellor Angela Merkel and said that he was open to pulling back troops that are on the border? At this point, how do you trust him?

You can't. He's trying to make a deal that gets him, you know, the best case scenario. So, the best case for him is he keeps Crimea. Most important, he keeps Ukraine off guard and feeling like it can do things that would mesh with Russia. And he gets relaxation of sanctions.

So, for Putin that's the trifecta, if you will. He has Crimea. The problem is on the other two fronts, because the Ukrainians are now pretty determined to be more pro-Western, have association agreements with the European Union, maybe even have a closer relationship with NATO. This is spooking the Russians.

And the sanctions, at least the limited sanctions that are in place now, reportedly they are in place because of the annexation of Crimea. That is to say, unless Putin gives up Crimea, it's tough to see this set of sanctions being overturned. So, he's trying to play a game now, and says I've got what I want now I promise to be good. So, you guys relax.

There's no way they're going to say, act first and believe you second.

Right. And Angela Merkel is a tough lady. She's slow to act, but when she does, she stays pretty tough.

Look, the Russians are more spooked by all this. That statement you read tells you, because actually Ukraine is not on track to be a NATO member. But what they see is something you and I talked about before, which is Putin got Crimea but he's losing Ukraine. And he sees Ukraine slipping out of his grasp.

So now, they're warning the Ukrainians, don't get close to NATO, don't get close to the European Union. But we've had our reporters in Ukraine. The mood in Ukraine is very anti- Russian, very pro-European right now.So, the very actions that Putin did that looked like a masterstroke have caused it to be very difficult for him to retain influence in Ukraine. That statement is an expression of it.

Topics: Uncategorized
Next entry »Why Obama and Abe should take lead on TPP
« Previous entryAre women set for a 'third revolution'?

Next entry »Why Obama and Abe should take lead on TPP
« Previous entryAre women set for a 'third revolution'?