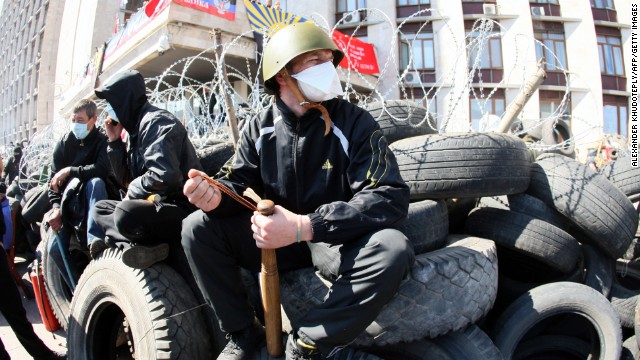 CNN speaks with Fareed Zakaria about the latest developments in Ukraine, talk of a civil war, and whether Russia is likely to invade eastern Ukraine. This is an edited version of the transcript.

Russia's foreign ministry is now using words like civil war when talking about the possible outcome in eastern Ukraine. So what's going on right now? Are the Russians looking for an excuse to move in?

It certainly looks like they're looking for an excuse to further destabilize Ukraine so that they can reassert their domination of their relationship with Ukraine.

Remember, Crimea was never the prize. Ukraine was the prize. They took Crimea because they realized the situation was spiraling out of control. You remember what was happening in the Maidan – suddenly they found Ukraine moving very rapidly toward the West.

And Putin decided [on that] really as a last-minute maneuver, I believe, because he had been stymied during the Olympics – the minute the Olympics got done, he initiated that KGB-style operation to take Crimea. But the prize, the thing he has always cared about, was Ukraine and dominating Ukraine, influencing it. So now we move to phase two of the operation and that is, how does Russia assert some kind of control over Ukraine?

And what they're doing now is through local supporters, local sympathizers, probably a lot of money and perhaps some special ops, they are trying to destabilize the east so that they can perhaps have a pretext to move in, but certainly have a pretext to have a very tough negotiation with the Ukrainian government.

Because the pro-Russian demonstrators, and there are plenty of them in Ukraine right now, they're asking the Russian president, Vladimir Putin, to send in "peacekeeping troops" into eastern Ukraine. So is that something you think Putin might be ready to exploit?

I wonder myself. I think that the reality is that, while in Crimea there was an overwhelming degree of support locally for annexation by Russia for becoming part of Russia. In eastern Ukraine, my understanding, talking to people on the ground, talking about some local politicians, is that it's more mixed. Even the Russian-speaking people in Ukraine have mixed feelings about whether they want to actually become part of Russia, whether they want to stay independent.

So Putin is probably trying to calculate whether those Russian troops would be received, would be given a hero's welcome. If they were, I think he'd certainty consider it. But it’s as likely what he's going to try to do is to go to the Ukrainians and say, you see, you have demands from your countrymen. They want us to get involved. At the very least, you have to give them substantial autonomy and you have to give us, the Russians, a special role in Ukraine.

That's what he wants; he wants a special role in Ukraine. Whether that means formal annexation or not, I think probably he's trying to figure out himself opportunistically what the best path is.

In the past 24 hours, the U.S., NATO, members of the European Union, they've all warned Russia not to move into Ukraine, no matter what. Sanctions are in place. There could be more sanctions. Bottom line, how tense is this current crisis right now?

This is a very, very significant crisis. This is essentially the most significant geopolitical crisis since the end of the Cold War, because what you have here is one of the great powers in the world – this is not a civil war in Syria which, tragic though it is, doesn't it have quite the same ripple effects.

Here, you have a great global power, Russia, that has decided it is going to flaunt one of the great global rules, which is sanctity of borders and the idea that you don’t annex parts of neighboring countries when you want to.

And so the Europeans and the United States – the West, in a sense – has to figure out how they try to maintain that international norm, that rule, that post-Cold War order that has been put in place and that has very rarely been violated in the last 50 years by a great power.

You know, if you're talking about an African country here or there, for example, that's very different. You have had substantial adherence to this idea. And Russia is breaking ranks. So it's a big deal.