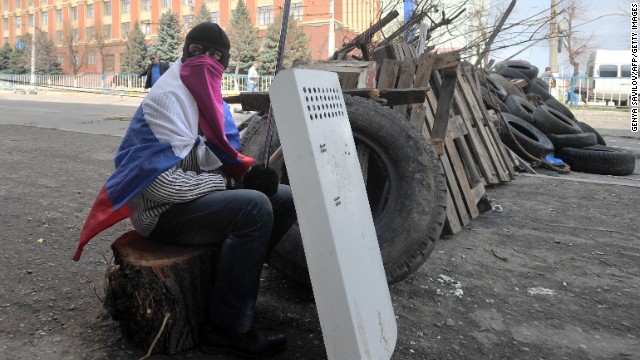 'Russia trying to create climate of chaos in Ukraine'

CNN speaks with Fareed Zakaria about recent developments in Ukraine, what Russia might be planning next, and how the United States should respond. This is an edited version of the transcript.

You've got pro- Russian demonstrators taking over government buildings in eastern Ukraine. You've got this ultimatum being laid out by the Ukrainian government. What do you make of the state of play inside Ukraine right now?

It feels like we're now in phase two of the Russian operation in Ukraine. Remember, Crimea was never the prize. Putin took Crimea because he could, because there was a naval base, because he feared Ukraine was slipping out of his control and he wanted to take that one piece that he knew he could get.

Ukraine was the prize. The whole purpose of Russian policy for the last decade has been to try to dominate Ukraine. So now phase two is, OK, we have Crimea. But Ukraine has become more anti-Russian and wants to move to the West. What do we do?

So, they've done two things. Over the last week or two, they’ve tried to essentially crash the Ukrainian economy. So, they have really essentially cut off supplies, contracts, business dealings. Now what they're trying to do is foment pro-Russian forces in Ukraine so that they create an atmosphere of general chaos.

At that point Putin can say, look, there's general chaos in Ukraine, we need to protect our Russian speakers. We happen to have 40,000 troops right near the border and we can go in. He may not need to go in physically, though he's clearly preparing for that option. But that also allows him to go to the Ukrainian government and say you've got to negotiate on my terms now, and those terms are substantial autonomy for eastern Ukraine, a permanent role for Russia in a kind of special relationship.

So, he's now moved on to the issue that was always his prize, how do I dominate Ukraine?

What is the next move for Ukraine, and for the United States and E.U. and NATO, who are trying to get Russia to stand down? Secretary of State John Kerry in a Senate hearing said very clearly, do not be fooled, this could be very easily viewed as a pretext for moving into Ukraine even further. What can they do?

Getting Americans or Europeans in, it's not going to look good or work. Russia just says, ‘you see there are foreigners involved on one side’. First Ukrainians have to get their act together and they're trying.

I think secondly, we have to start specifying exactly what would happen if the Russians were to invade. I think that really involves getting the Europeans to take a tougher line. If the Germans were to outline tough sanctions, real sanctions, that might make Moscow have second thoughts.

There's not much we can do. We're not going to fight a war with a nuclear superpower over Ukraine. But the Germans do a lot of trade with the Russians. It would be a body blow to the Russian economy.

It’s pretty interesting that the foreign ministers of Ukraine and Russia might meet. Isn't that a huge step?

That is actually a bigger step. And it's gotten lost in some of the protests. The Russians, remember, had never accepted the Ukrainian government. They argued this was illegitimate. Now, the Russian foreign minister is meeting with the foreign minister. The Russians have said they would be willing to meet with all parties in the Ukrainian political system, meaning some of the pro-Russian ones. So, Putin is very clever. He's making some very tough moves. He's at the same time making some diplomatic overtures. And he's trying to see which ones work out. I don't believe he's ever had a master plan. He's a master opportunist.

What we need to do is be a little more specific on what we can do. The reason we're not, of course, is we don't have agreement, particularly with the Europeans.

What do you think about what Senator McCain and other Republican members of the Foreign Relations Committee basically saying that the administration, the U.S., has lost all credibility in foreign policy right now?

I think it's mostly partisan posturing…I would suggest that the way you gain credibility in a situation like Russia is not to have gone around invading other countries. I mean, the idea that if we had only intervened in Syria, we would have more credibility with the Russians. I feel like we tried that experiment in the last administration. We invaded Iraq, we invaded Afghanistan, and Putin still invaded Georgia and he still annexed Abkhazia and South Ossetia.

These situations are sufficiently complicated, that if you decide you want to put a partisan spin on them, you can read almost anything the way you want to. I think that this is a tough period we're going through, and a very serious crisis we're confronting in eastern Ukraine, and I just wish that the United States were able to speak with one voice rather than using this occasion and this crisis to turn it into yet one more partisan slinging match.

You've suggested this may be the most significant crisis involving the U.S. and Russia since the end of the Cold War. Are you still buying that?

Absolutely, because since the Cold War ended, we have had a set of rules of the road that have allowed for an unprecedented level of political stability, the global economy has prospered, the great powers have all been playing by a certain set of rules of the road. And what Russia has been doing over the last few years, but particularly here, is essentially saying, we're going to tear up this order. We are not going to abide by the idea that borders are sacrosanct, because what they are trying to do now in eastern Ukraine is they're trying to foment extreme instability.

The idea, I think, is to create a general climate of chaos, then declaim that the Russian army has to go in as a matter of protecting its own borders, protecting its own Russian speakers…This is stuff that really has not been employed by any major power really since 1945, but certainly since the end of the Cold War. So it's a big deal.