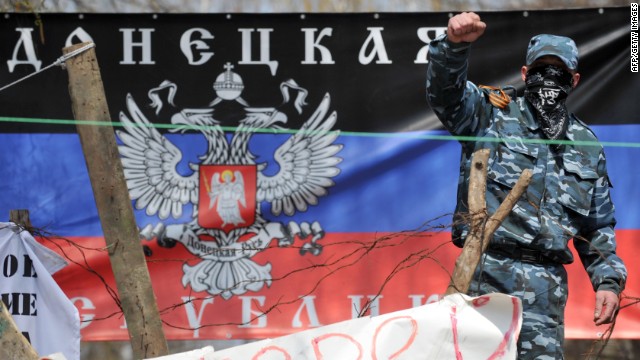 Zakaria: Ukraine needs to get tougher

CNN speaks with Fareed Zakaria about recent developments in Ukraine, and whether Kiev has lost control of the east of the country. This is an edited version of the transcript.

A Russian air force plane reportedly made 12 passes near a U.S. Navy warship in the Black Sea over the weekend, a move the Navy is calling provocative and unprofessional. Something like that doesn't just happen. Is Vladimir Putin sending a clear message here or are we reading too much into it?

No, these things don't happen by accident. But I think that rather than a clear message, the way we should think about this is that Putin really is playing a game where he's pressing and pushing and trying to see what reaction he gets. It's almost like a wrestler that is trying to throw you with a couple of fancy moves and scattering them around.This is really how things seemed to happen during the Cold War, and it was routine and there was an almost agreed upon pattern of behavior. But for 20 years, this has not really happened at all.

The most important set of moves are the ones in eastern Ukraine, where he is trying to figure out how much trouble he can foment there. In the eastern part of Ukraine, where there are lots of pro-Russians, lots of ethnic Russians, he’s trying to see how much chaos he can cause. What will the government of Ukraine do? Will they be able to get control over that place? Or can he then step in and say, we need to look after Russians because, in the Ukraine, they're being discriminated against, they're being persecuted? And so maybe the Russian army moves in. Maybe he tries to negotiate some kind of separate autonomy. All of these are sort of moves to create chaos, which he can then say the Russian army is the solution to.

Is there a lesson from what happened in Crimea?

I think it's pretty fair [to draw a lesson]. With the reporting we have out of eastern Ukraine, a lot of these people who are at the center of it are well-organized, but they have no army uniforms, they have no markings. They are wearing black clothes, they often have ski masks on. This is exactly what happened in Crimea. It’s essentially a kind of KGB special op. It's not the army, but it sure as hell isn't just random people who are pro-Russian.

With the same guns as the military…

Working on a schedule with military precision.  These guys seem very organized. They know what they're doing. They have weapons. They have instructions.

Has the Ukrainian government already lost control of eastern Ukraine?

I think that is the crucial question. So far, what they're doing is they're trying to see if there are ways in which they can get control without doing something so bloody or overt that they have to clear out squares, they have to use tear gas.

Remember, eastern Ukraine is right next to Russia. There are 40,000 Russian troops waiting on the other side of that border. If the Ukrainian government goes in and opens up these buildings and clears the activists out, what if there are a lot of deaths? The Russian army will then have the perfect pretext it wants to go in. That's the game they're playing. But I think the Ukrainians need to get a little tougher here. They have got to get control over their country. There's very little people from the outside can do if the government cannot even get control of 10 office buildings in eastern Ukraine.

For all practical purposes, the Russians have been accusing the U.S. in effect of fomenting a lot of this. They were pointing out John Brennan, the CIA director, was just in Kiev. Joe Biden this weekend is heading over there. The president of the United States has been making phone calls. So that's an old Cold War tactic as well.

Absolutely. The Russians have a completely alternative narrative, which is that NATO has been an aggressive force, pushing towards their border. And now that what you have are American special ops and CIA forces trying to take Ukraine over.

But the crucial question that we don't know the answer to is how will the Ukrainians react now? Because what is happening is phase one, Putin was testing the West, testing what would happen when he annexed Crimea. Now he's testing the Ukrainians. Will this government actually take control over its own country? Will it do it at the cost of angering the Russians?

Will Putin respond to intensified U.S. and European sanctions?

If there are energy sanctions, he will respond because, of course, 70 percent of the Russian government’s revenue comes from oil, natural gas, minerals, things like that. The Europeans have been very reluctant to do anything like that. And by the way, that could cause an economic crisis of kind of Lehman-like…

In Germany, they depend on this kind of energy supply from Russia.

Well, the shock that this would produce, even the news of it, I think, could have a huge impact. So, we have to be honest. These things would be very painful if we were to do serious sanctions, the kind that would matter to Vladimir Putin, they would matter to every American as well.