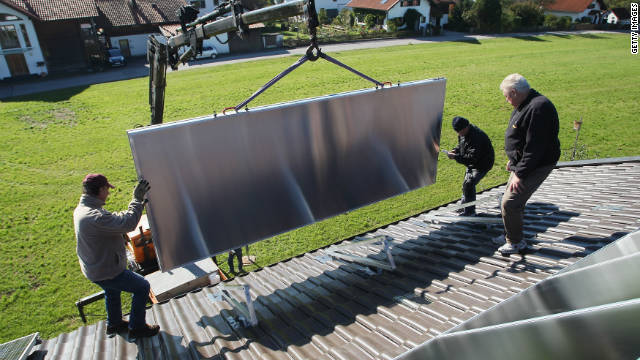 In response to such worries, Chancellor Angela Merkel’s cabinet approved a plan last week to trim subsidies for solar and wind power. The proposed law would also exempt fewer companies from paying a stiff renewable energy surcharge, an exemption that has come under heavy fire in Europe for giving German industry an unfair competitive boost.

In truth, the proposed energy reform law would merely slow down Germany’s drive toward green energy. It doesn’t alter the visionary (some would say utopian) goals of the country’s policy of Energiewende, or energy switchover. Launched in 2000, when Social Democrats ran the government, the Energiewende calls for abolishing nuclear power and envisions renewables providing 80 percent of Germany’s power by mid-century.

The conservative Merkel had reportedly been skeptical about the “zero option” for nuclear energy. After Japan’s Fukushima calamity in 2011, however, she abruptly changed course, endorsing the phase out of all nuclear plants by 2022. Meanwhile, Germans have invested heavily in wind and solar power, encouraged by a generous “feed-in tariff” that guarantees prices and priority access for any renewable energy fed into the nation’s power grid.

Renewables now supply about 22 percent of Germany’s energy, compared with nine percent in America. Bavaria is not exactly the Costa del Sol, but it generates more photovoltaic solar energy than the entire United States. These are impressive achievements, but the costs of going green in a hurry are becoming unsustainable.

For German consumers who ultimately foot the bill, the tab for renewable subsidies comes to $32 billion this year, and soaring electricity bills are hitting households and businesses hard. The Energiewende also requires construction of a costly and extensive new infrastructure of high-voltage transmission lines to carry power from northern wind farms to the industrial south. The spreading visual blight has sparked local outbreaks of Nimbyism.

“Germany’s electricity prices are already the highest in Europe, 40 to 50 percent higher than the EU average and twice as much as in the U.S.,” notes Jurgen Kronig, a prominent Energiewende critic who writes for the German weekly Die Zeit.

Industry and labor also are sounding the alarm about the policy’s impact on Germany’s finely-honed export machine. Manufacturers there have adapted better to globalization than their counterparts in most other high-wage countries, but energy-intensive industries like autos, paper, chemicals and basic metals have suffered substantial net export losses in recent years. German and other European companies are looking to expand production in the United States as the shale gas boom lowers energy prices here.

“We simply have a gigantic problem in competition with the United States,” conceded Sigmar Gabriel, Economy and Energy Minister and the author of the government’s new plan. To keep energy costs from overwhelming German’s comparative advantages in precision engineering and quality, the government has been forced to dramatically expand the number of companies that are exempt from the renewable energy surcharge. The government’s new plan reduces that number, but Gabriel is clearly worried that the EU might label Germany’s surcharge exemptions as a trade-distorting government subsidy to exporters.

The Energiewende aims at making Germany a green energy powerhouse and global leader in the fight against climate change. But, in a cruelly ironic twist, Germany’s greenhouse gas emissions are going up, not down. Wind and solar are intermittent sources of energy that require backup from conventional plants. As nuclear power generation shrinks (down from 25 percent to 16 percent of consumption) Germany has been forced to rely more on fossil fuels to keep the lights on. Going green, it seems, also means going brown: Germany is importing more relatively cheap coal from the United States and Russia, and building new coal-fired power plants that use lignite, an especially dirty form of coal.

Meanwhile, the Ukraine crisis has illuminated another indispensable pillar of the Energiewende – Russian gas. Germany gets about a third of its natural gas and oil from Russia. This surely has to factor into Berlin’s calculations about how forcefully to respond to Vladimir Putin’s annexation of Crimea and his ongoing campaign to destabilize Ukraine.

In light of Moscow’s cynical reversion to nationalism and power politics, it behooves Germany – and eastern European countries, which rely much more heavily on Russian fuel – to start winding down fuel contracts with Moscow and looking elsewhere for energy. As it happens, Germany may not have far to look: IHS Energy, a research and consulting firm, estimates that the country has enough shale gas to replace all of its Russian imports. Even so, the prevailing green ideology blocks efforts to tap this resource.

All of this suggests that Germany’s nuclear-phobic turn has drastically narrowed its energy options. Moreover, if averting global warming truly is your overriding priority, it makes little sense to rule out zero-carbon nuclear power. U.N. scientists recently said that to keep climate change within manageable limits, the world will need to triple the energy it gets from low-carbon sources – including nuclear reactors.

Germany’s energy travails suggest that the United States would be wiser to stick with President Obama’s “all of the above” approach to balancing economic and environmental goals. Renewable fuels should and will pay a larger role in meeting the world’s energy needs, but attempts to press the pace of this shift too hard will likely backfire.