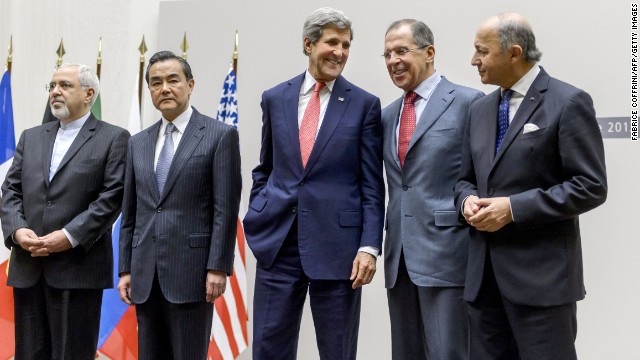 Why we must give Iran nuclear deal a chance

By Tyler Cullis and Jamal Abdi, Special to CNN

Editor’s note: Tyler Cullis is a policy associate at the National Iranian American Council. Jamal Abdi is policy director at NIAC. The views expressed are the authors’ own.

The United States could be on the verge of securing a historic agreement over Iran’s nuclear program, one that verifiably limits it and opens the door to further cooperation between the two countries. Yet with a diplomatic victory on the horizon, the rhetoric of those who have long opposed any diplomatic resolution is reaching dizzying heights of disingenuousness.

During a recent Senate hearing, Senate Foreign Relations Committee Chairman Robert Menendez (D-NJ) hit out at reports that negotiations with Iran may produce a deal that “only” extends Iran’s nuclear breakout timeline to 6 to 12 months.

“I don’t think we did everything that we’ve done to only get a six to twelve month lead time,” Menendez lamented as he grilled Secretary of State John Kerry over the progress of the talks.

Israeli Intelligence Minister Yuval Steinitz piled on shortly after, calling such a timeline a “[U.S.] surrender to Iran” and “unacceptable.”

But there is something inconsistent about such criticism considering that under the sanctions approach preferred by policy makers like Menendez and Steinitz over the past decade, Iran has gone from just 300 centrifuges to 19,000 centrifuges. Indeed, according to some estimates, Tehran was approaching a nuclear breakout timeline of less than a month.

Meanwhile, the interim deal with Iran that Kerry brokered in October (which Menendez in effect tried to kill by proposing a new round of sanctions) doubled the breakout timeline to two to three months. Yet even as the United States closes in on a final deal that could extend that timeline to six to twelve months (while at the same time dramatically improving our ability to detect any attempt by Iran to cheat on its nonproliferation obligations) Menendez is claiming that this is just not good enough.

This begs the question: what is the alternative offered by opponents of diplomacy? After all, if the Menendez approach (sanctions, sanctions, sanctions!) brought us a mere month away from Iran being able to produce enough weapons-grade uranium for a nuclear bomb, critics of negotiations should have something better up their sleeve.

The Israeli government appears to believe that threatening possible military strikes on Iran’s nuclear facilities is the solution. But here’s the kicker: some estimates suggest that an Israeli strike on Iran would delay Iran’s breakout timeline by…six to twelve months – the same as the negotiated approach. The problem, of course, is that unlike a diplomatic solution, which would trade sanctions relief for verifiable limits on Iran’s nuclear program, an Israeli (or U.S.) military strike would have the opposite effect, and could prompt Iran to kick out inspectors and make a dash for a nuclear deterrent.

All this suggests an understanding of the potential timelines under these scenarios points to one conclusion – the White House is taking the best approach, one that extends the breakout timeline and has the best potential for securing an intrusive inspections regime to ensure Iranian compliance.

Opponents of diplomacy would do well to reflect on the reality that as the United States has tried to leverage sanctions against Iran, Tehran has responded by ramping up the production of centrifuges. As a result, the U.S. has long been in need of a new direction in its policy toward Iran.

Tentatively, but unmistakably, the Obama Administration has pursued a new approach – one that has brought us the first freeze on Iran’s nuclear program in a decade and which reports suggests have led to significant concessions on Iran’s Arak reactor.

If such a deal is not good enough for some in Congress or Israel’s government, then they must be prepared to speak up and offer viable alternatives. In the meantime, they should avoid undermining one of the most promising prospects for limiting Iran’s nuclear program in years.

Next entry »On GPS Sunday: Latest from Ukraine, and where U.S. ranks in quality of life
« Previous entryIs confrontation with Russia inevitable?