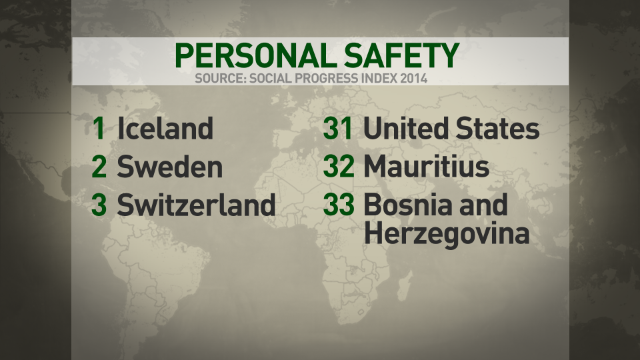 How to measure 'social progress'

A groundbreaking new study, the Social Progress Index, suggests that economic development is “necessary but not sufficient” for social progress and quality of life.The bad news for America? It isn’t even close to being number one.

Each component of the rankings includes a range of subcategories that reveal a greater diversity than can be reflected in a single measure like gross domestic product. G8 countries Germany (#12), the United Kingdom (#13) and Japan (#14) fare pretty well overall. The rankings of fast-growing economies like China (#90) and India (#102), meanwhile, show that despite despite their fast-paced development in recent years, they still have more to do. And the U.S.? It comes in at 16th place.

Breaking the numbers down, the U.S. ranks 31st in one of the subcategories for basic human needs: personal safety. This measure includes violent crime and homicide rates. Indeed, in the latter category, the U.S. is tied at number 41 with turbulent countries like Ukraine and Lebanon. In the political terror sub-category, the U.S. ranks 80th, along with Venezuela, Indonesia and Cuba.

The U.S. scores especially badly in health and wellness (#70) and ecosystem sustainability (#69). Health and wellness is based on measures like the obesity rate, where the U.S. ranks, perhaps unsurprisingly, at 125. The only countries with lower scores are Mexico, South Africa, United Arab Emirates, Jordan, Egypt, Saudi Arabia, and Kuwait.

But for another subcategory of basic human need, undernourishment, the U.S. comes in first place (along with 65 other countries ranging from the United Kingdom to Malaysia).

And the U.S. belief of itself as “the land of the free and the home of the brave” does get some support from the index. For both political rights and freedom of speech, the U.S. is ranked first. Of course, many other countries share the top spot in both rankings; the other first place nations for free speech span the globe, from Japan and Australia to Mali and Chile.

So the picture is mixed, and it is clear that no one measure can completely capture the entirety of a nation. Still, the Social Progress Index underscores that there is no room for complacency – in the United States or anywhere else.

Topics: GPS Show
Next entry »Life in limbo for Dominicans of Haitian descent
« Previous entryHow U.S. is lagging on quality of life

Next entry »Life in limbo for Dominicans of Haitian descent
« Previous entryHow U.S. is lagging on quality of life