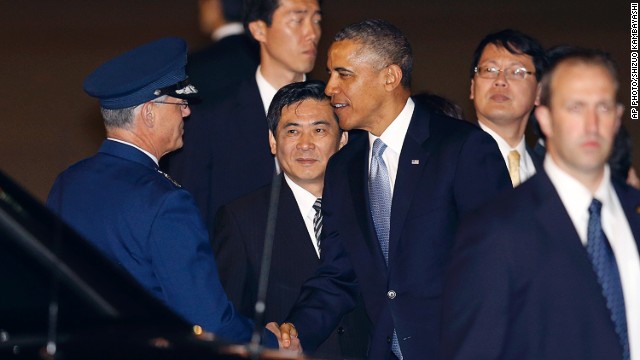 Time to double down on the Asia rebalance

Editor’s note: Daniel M. Kliman is a senior advisor with the Asia Program of the German Marshall Fund of the United States (GMF) and a fellow at the Truman National Security Project. The views expressed are his own.

President Barack Obama’s Asia trip, which has started with a visit to Japan, will send an unmistakable signal: the United States remains committed to a region that has become the world’s economic and military center of gravity.

Yet once the afterglow of the visit fades, U.S. allies and partners in the Asia-Pacific are bound once again to question American staying power. True, the Obama administration’s signature foreign policy initiative – the pivot or rebalance to Asia – has achieved many of its initial objectives. Countries in the region recognize this. But they are ultimately more focused on what will come next. And with less than three years of Obama’s presidency remaining, now is the moment to lay out a vision for U.S. Asia policy through 2016.

Two opposing sets of forces have long co-existed in Asia. Deepening economic interdependence, a growing constellation of regional forums, and the spread of democratic values promote peace. At the same time, rising nationalism, territorial disputes, military buildups, and the adverse impact of climate change create an undercurrent of instability.

Successive U.S. presidents have responded to these competing forces by deepening engagement with the Asia-Pacific region in order to tilt the balance toward peace. For example, the Clinton administration revitalized the U.S.-Japan alliance, worked to integrate China into international institutions, and reset relations with India. Under President George W. Bush, the United States strengthened ties with Japan and South Korea and inked a landmark nuclear agreement with India. As part of Obama’s rebalance, the United States has joined key regional forums, established a new partnership with Indonesia, enhanced its military presence in Southeast Asia, and launched an ambitious (if unfinished) round of regional trade talks.

More from CNN: Why India feels jilted by Obama

The challenge today in Asia is that the forces of instability are becoming more prominent while the sources of peace are waning in influence. The United States must update an Asia-Pacific strategy devised in 2011 to reflect the geopolitical realities of 2014. And while President Obama’s trip to Japan, South Korea, Malaysia, and the Philippines will provide an opportunity to take stock, the next stage will require creating a network of cooperation that spans U.S. partners and allies in the region and beyond.

This web of “likeminded” powers would not contain China, but could shape the context of its rise in ways that deter conflict and encourage China to embrace the resolution of international disputes through peaceful negotiation rather than military intimidation or outright force. The network could also help to integrate transitional countries such as Myanmar and non-democratic states such as Vietnam. European participation in the web would link it to a global order rooted in the rule of law and democratic values.

American leadership will play a critical role in building this network of cooperation. But what can it do to make all this a reality?

First, the United States should partner with Australia and Japan to establish an “Indian Ocean Submarine Center of Excellence” in Perth. With more submarines deployed in the Indian Ocean, often by nations with little experience of undersea operations, there is a need to develop common rules of the road. The school would bring together Indian Ocean navies that possess or plan to acquire submarines. Beyond reducing the possibility of future accidents, the center’s activities would advance naval cooperation among participating nations.

Second, the Obama administration should launch a dialogue among computer emergency response teams from the United States, Japan, South Korea, Australia, New Zealand, Canada, and the United Kingdom. This dialogue would bring together premier cyber response teams from some of the world’s most information dependent economies. Participating teams would exchange best practices for maintaining secure networks and share assessments of online threats.

Third, the United States should encourage Japan, South Korea, and Australia to initiate a caucus of Indo-Pacific countries committed to a free and open Internet. The primary target of the caucus would be emerging democracies in South and Southeast Asia that remain ambivalent about the future of Internet governance and will command an increasing share of the world’s online population in the coming decades.

President Obama has arrived in a region that stands at a crossroads. His initial engagement has succeeded in keeping the peace. Yet with the forces of instability ascendant in Asia, the current U.S. approach risks falling short. The Obama administration should seize the moment and carve out a legacy by doubling down on the Asia rebalance.