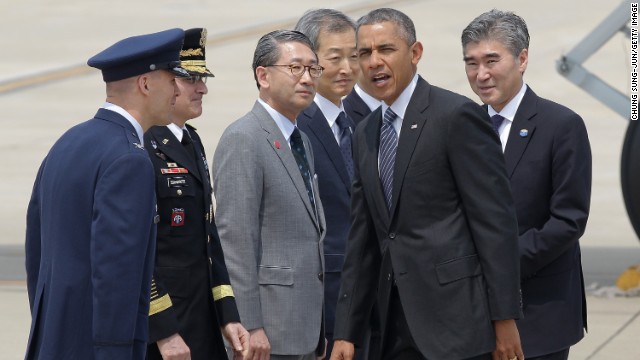 How Obama can make Asia trip a success

By William Piekos, Special to CNN

Editor’s note: William Piekos is program coordinator for Asia Studies at the Council on Foreign Relations. The views expressed are his own.

President Barack Obama's trip to Asia this week runs the risk of being just that – another trip to Asia. Recent months have seen a slew of visits to the Asia Pacific – First Lady Michelle Obama, Vice President Joseph Biden, Secretary of State John Kerry, and Secretary of Defense Chuck Hagel have all traveled to the region. Now the president is joining them with a whirlwind trip to Japan, South Korea, Malaysia, and the Philippines. Like all his cabinet members, President Obama will undoubtedly convey the message that the United States will be a central player in Asia for years to come. But he has the opportunity to do more than simply reiterate U.S. interests, and he should make concrete progress toward furthering U.S. economic and security objectives.

In East Asia, President Obama’s job is two-fold. First, he should rejuvenate Trans-Pacific Partnership (TPP) negotiations. Unfortunately, his just-completed state visit to Japan was an ominous sign for the future of the TPP – Obama appears to have made little headway in trade negotiations during his stay in Tokyo, with the two sides still apparently unable to reconcile tariff demands in the agricultural and automobile sectors.

During his stop in Seoul, the president should leverage his presence to persuade South Korean President Park Geun-hye to join the negotiations formally and give the trade pact increased clout. Seoul has already held bilateral talks with some of the TPP’s participants and is party to numerous free trade agreements, including one with the United States. The TPP is one of the pillars of the Obama administration’s Asia pivot; after he leaves East Asia, the president must hope that his top-down efforts will bear fruit in the future.

Second, President Obama should build upon the trilateral summit meeting he held with President Park and Japanese Prime Minister Shinzo Abe during the Nuclear Security Summit in March to encourage Park and Abe to hold their own bilateral summit. Relations between the two U.S. allies remain strained, but the common threat of North Korea has brought the two sides together. Further rehabilitation of Japanese-South Korean relations requires President Obama to use this and other security issues, such as maritime security cooperation, to galvanize future talks.

Obama will then travel south to Malaysia, where he will be the first U.S. president to visit Kuala Lumpur in almost fifty years. Here, the president's primary goal will be to deepen strategic ties between the two countries. Malaysia and its president, Najib Razak, have avoided falling in too closely with either Beijing or Washington, but China’s assertiveness in the South China Sea is proving worrisome even to neutrally minded Malaysia. The United States and Malaysia already engage in a number of bilateral and multilateral military exercises and exchanges; now is the time for the president to push for a more high-profile strategic partnership. In the economic realm, Obama has the opportunity to leverage his historic trip to counter growing opposition to the TPP in Kuala Lumpur and argue the agreement’s merits.

By comparison, the United States’ relationship with the Philippines, the president’s last stop, is on sound footing. Yet even here, continued reinforcement is important. As in Kuala Lumpur, security concerns will be the primary theme of the visit. The Philippines has been the most vocal critic of China in Southeast Asia, requesting arbitration in the United Nations for its maritime dispute with Beijing earlier this year. In anticipation of Obama’s visit, Washington and Manila have already agreed to the expansion of U.S.-Philippines defense cooperation, allowing more U.S. forces to cycle through the Philippines and further buttressing strong security ties. Officials in both countries have also indicated that economic issues will be discussed – Manila has recently expressed renewed interest in joining TPP negotiations, fearing that being excluded from the deal could leave the Philippines economically handicapped. But there is little doubt that military cooperation and China will be at the forefront of discussions.

It would be easy for President Obama simply to praise his Asian hosts and move on to his next stop. His visit to Tokyo was an inauspicious start – there were no breakthroughs in TPP negotiations, and the president expressed strong but familiar support for Japan. Without achieving progress on the TPP and measurable steps to deepen security cooperation with and among U.S. partners, the president’s visit to the region will be largely a wasted exercise. Words in support of the Asia pivot no longer suffice – it is time for measurable action to back them up, and President Obama should seize the opportunity to do so.