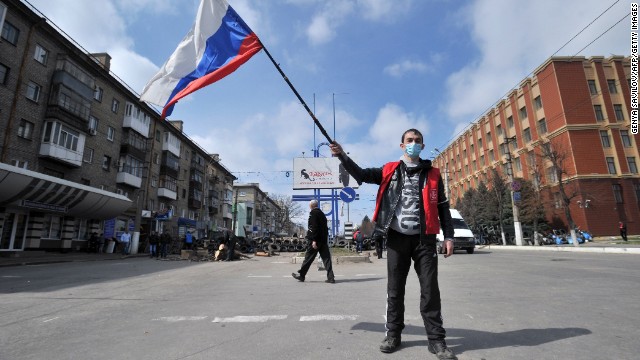 Editor’s note: Bruce Stokes is Director of Global Economic Attitudes at the Pew Research Center. The views expressed are his own.

As the crisis in Ukraine deepens, Americans back the kind of economic sanctions against Russia recently announced by the Obama administration. But even as allegations mount of covert Russian intervention in Ukraine, a war-weary American public doesn’t back getting tougher on Moscow. There is no appetite for significant military involvement in a region that few see as very important to U.S. interests. And even conservative Republicans oppose military assistance to Kiev, while Tea Party adherents are divided over the issue.

Yet, as with so many issues in Washington today, strong partisan differences are clear when it comes to whether President Obama is handling the crisis “about right” or is not being tough enough, according to a new survey by the Pew Research Center.

The repeatedly expressed public desire for a minimalist U.S. role in the Ukraine crisis complicates the domestic U.S. politics of the “new Cold War” for both the cautious Obama White House and conservative politicians, such as Sen. John McCain (R.-Az.), who back deeper U.S. involvement in the struggle.

Americans are often accused of not paying attention to the world. But nearly half of Americans have now heard a lot about tensions between Russia and Ukraine. This is an increase from roughly one-in-four who said they were following developments in Ukraine very closely in an early April Pew Research survey.

But while Americans may be paying more heed to the confrontation between Moscow and Kiev, they have yet to be convinced it poses a threat to America’s vital national interests. Only about a third of Americans think that what happens between Russia and Ukraine is “very important” to the United States. And about the same proportion say Ukraine is “not too important” or “not at all important” to American interests. Those Americans 50 years of age and older are twice as likely as younger Americans ages 18 to 29 to see Ukraine as having strong strategic importance. But even these more concerned older Americans represent a minority in their own age group.

Such sentiments fuel a desire for the United States to steer clear of the Ukraine situation. In a late March Pew Research survey, 52 percent of Americans said they did not want Washington to get too involved in the looming confrontation between Russia and Ukraine, a proportion roughly comparable to that which expressed the same sentiment in early March.

Nevertheless, in the most recent Pew Research survey, the public does support increased U.S. economic and diplomatic sanctions by a 53 percent to 36 percent margin. This includes 58 percent of Democrats, 55 percent of Republicans and 69 percent of adherents to the Tea Party. In late March, only a quarter of the public wanted to consider economic and political options to address the Ukraine situation. This may suggest the public is warming to non-lethal responses to Russia’s actions.

Meanwhile, there continues to be no public support for direct U.S. military intervention of any nature to defend Ukraine. In the latter part of March, only 6 percent of Americans wanted to consider military options, such as U.S. military boots on the ground. In the latest Pew Research survey, just under a third support sending arms and military supplies to the Kiev government, a course of action strongly advocated by McCain and other leading GOP officials. This includes just 45 percent of Tea Party sympathizers, 37 percent of Republicans and about a quarter of Democrats.

There is nothing new about Americans’ reluctance to come to Ukraine’s defense militarily. In September 1993, in the wake of the dissolution of the Soviet Union and tensions over the dispersal of Kiev’s nuclear weapons, 69 percent of the American public disapproved of the use of U.S. forces if Russia invaded Ukraine, according to a Times Mirror survey at the time.

But there is a degree of partisanship, not over what to do about Ukraine, but about Obama’s handling of the issue, which suggests the rancor has more to do with the ongoing struggle between Republicans and the White House than with the confrontation with Russia. More than half of Republicans (55 percent) and two-thirds of people who sympathize with the Tea Party say Obama has not been tough enough in dealing with the situation in Ukraine, even though he seems to be doing what most Republicans want him to do and not doing what they oppose. Only a third of independents and 23 percent of Democrats say the president is not being tough enough. These views have remained steady over the past month.

In the weeks and months ahead, U.S. resolve in dealing with Russia over Ukraine will be sorely tested. Americans seem to have warmed to economic sanctions in the confrontation, but they still shy away from any form of military involvement, however minimal. If future White House actions track public opinion, the partisan clamor over Obama not being tough enough in dealing with Russian President Vladimir Putin may well continue, transforming a foreign policy challenge into yet another act in an ongoing, domestic partisan drama.