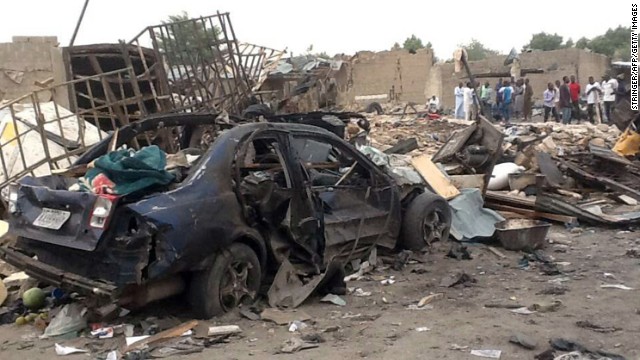 How Nigeria should respond to Boko Haram

Editor’s note: Orji Uzor Kalu is a former governor of Nigeria’s Abia State and 2007 presidential candidate. The views expressed are his own.

The announcement last month that Nigeria’s economy had finally surpassed South Africa’s to become the largest in Africa should have been a cause for celebration – a shift that recognized the significant progress this country has made. Sadly, what was to have been a landmark announcement was overshadowed by an all too familiar problem.

On April 14, a bomb ripped through a crowded bus station in Abuja, claiming dozens of lives. The scene was described by some as post-apocalyptic, with body parts strewn across the area. The Islamic militant group Boko Haram claimed responsibility for the attack, with one alleged representative issuing a chilling warning that “this was but a minor incident” and that “we [continue to] walk among you, yet you do not know who we are.”

The group didn’t take long to act on its threat. Less than 48 hours later, the group abducted almost 200 girls from their boarding school in the northeast of the country, with gunmen storming the school as they slept. Reports this week suggest many of the girls may since have been sold into marriage.

The two attacks are just the latest examples of an apparent upsurge in militant attacks, activity that has spilled over to neighbors such as Cameroon, whose government has warned that clerics have been recruiting members in mosques in the country.

All this suggests that it is time to rethink the threat posed by the group, not least with an acknowledgment that this is by no means simply a Nigerian problem. But in doing so, governments in the region must also be willing to take a more proactive approach – simply condemning militant action after the fact is futile. Instead, regional leaders need to cooperate in tackling the root of the problem by understanding the motives and ambitions of the group.

So what does Boko Haram want? Yes, the group is broadly opposed to the education of girls, especially through what it deems “Western” education. And the group has also long considered itself to be a nation-building movement.

But this troublingly organized militant outfit is not merely interested in imposing Sharia law in the northeast of the country, capitalizing on the indoctrination of those disillusioned by the failure of Nigeria’s leaders to introduce reforms and improve the lives of those living in rural areas. In this era of accelerating globalization, it appears Boko Haram hopes to align itself with extremist forces in Niger, Mali and potentially in the Middle East, which raises the specter of coordination on the stockpiling of munitions, intelligence gathering and future assaults.

It is in part the fear that the group may already have made progress on cross-border cooperation that has sparked discussion among officials in the region of a multinational joint border patrol, one that could comprise representatives from Nigeria, Cameroon, Chad, Niger and the Republic of Benin – all of whom might find themselves in Boko Haram’s crosshairs. Concrete progress on this idea could see the establishment of cooperative patrol teams along all common borders with a view to developing a partnership that would reinforce both domestic and international security.

Such patrols would also have the advantage of further facilitating the sharing of timely intelligence and modern technology on a range of cross-border concerns, not just terrorism.

Unfortunately, at least in Nigeria’s case, there are internal as well as external barriers to realizing such an initiative, not least the fragmented nature of governance here, which is compounded by mistrust between states. And although the call from leaders across the country for a united front in tackling Boko Haram is welcome, progress will be dependent on the country embracing and investing in new technologies and the enhancement of military intelligence capabilities.

But even before such investment, Nigeria should undertake a proper and thorough audit of its internal defense capabilities to ensure that future resources are directed to where they will be most effective. Establishment of a major military barracks in Borno State, where the recent mass kidnapping took place, would be one way of improving the quality of information and communication in the unsettled northeast of the country. The need for improving such intelligence was underscored by the inability of security forces to quickly establish the precise whereabouts of the girls.

Recent events have made clear that now, more than ever, Nigeria and its neighbors need some fresh thinking on how to improve security. Doing so will not only directly save countless lives, but will also ensure the kind of stable economic environment the country needs to continue its rapid development.

In the meantime, our thoughts and prayers should go out to the families of the innocent girls who were snatched from their beds – a reminder of the tragic future that awaits Nigeria if it fails to act now.