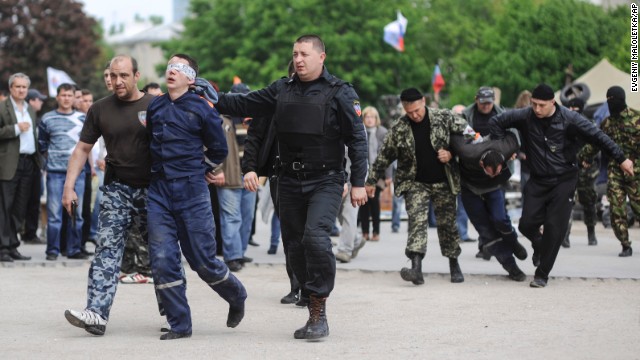 CNN speaks with Fareed Zakaria about the latest developments in Ukraine, tensions between the Ukrainian government and pro-Russian militants, and whether sanctions can deter Russian aggression.

There is a fear that Vladimir Putin might look at the violence over the weekend in Ukraine and say “we now see a reason to invade.” Do you see Russia really wanting to invade eastern Ukraine or do you think Putin is just happy with the instability that's already being created within the country right now?

That's the million dollar question – is he doing this to create an atmosphere of instability, which allows him to prove his point, which is that you can't solve Ukraine without him. You can't hold elections there. And this is all about the run-up. We're 20 days away from the elections and he’s trying to prove, it seems to me, that nothing can happen in Ukraine unless he decides it's going to happen.

Now, the West has made several offers of diplomatic meetings and solutions. Right now, he doesn't want to take them, because I think he still wants to continue to prove that he can destabilize the place much more than we think. Now, the danger is that things can get out of control. We don't entirely know what his calculation is. But you know, in the back of everyone's mind, the big question is, could you imagine Russian troops and American troops in some way being locked in a military confrontation? Remember, the entire Cold War that never happened. We seem to be getting a little bit closer to what is still a very unlikely event. But we're getting a little bit closer to it.

My fear about those kind of gestures, military gestures, is you want to do something that would actually work and would make a difference, and where the threat is real. One of my old professors said two things are very dangerous and expensive in international relations – threats when they fail and promises when they succeed. So be very careful when you make threats and promises. I think it would be very hard to muster a military threat that will be meaningful, other than presumably a lot of air power.

But again, you would be talking about an American-Russian direct confrontation. Remember, these two countries each have 3,000 nuclear missiles. We always stopped short of that during the Cold War for fear over what if this escalates.

Over the weekend, you spoke with the man at the U.S. Department of Treasury who is in charge of applying sanctions pain to Putin and to his inner circle. How are they defending the sanctions, especially the unilateral sanctions the U.S. has put in place? Because many experts don't think they have been effective enough.

The interesting question is what does one mean by work? So if you look at the sanctions, there's no question, of course, the Russian stock market is down 13 percent. Russia was going to grow at 2 percent, 2.5 percent this year. Estimates are now it will grow zero. They tried to borrow money last week. They tried to do a bond offering. They had to cancel it because there was no demand.

You asked the key question – does Vladimir Putin care?

Right. There is no question there is pain. The question is, is that pain meaningful to the only guy that matters? My guess is in the short term, it doesn't matter, because Putin is actually up maybe 10 or 15 points in the polls because of this. This is nationalism – he wraps himself with the Russian flag.

But eventually, any ruler has to care, especially in an oil-rich country. Because remember, the way these oil-rich countries survive, they give subsidies to people. They dole out a lot of money, and Russia is no exception. So, if the money starts running out, my guess is it will make a difference, and he will want to cut a deal – a deal that proves, at some level, he's won by proving and reinforcing the idea that Russia needs to have enormous influence in Ukraine.

The reality is that the pictures we have seen, in part of eastern Ukraine, they are pro-Russia. They may not all be, they may not want independence, but it's very clear that the Kiev government is not very popular there, and that these local separatists do have some backing.

And the government cannot calm this by itself.

And if they can't do it by the elections, we have a real problem, because will the elections be held in eastern Ukraine or not? We're on a 20-day clock here, where things can get much worse.

German Chancellor Angela Merkel has been making the rounds in Washington. She obviously met with the president. You've got some insight into what she, potentially, together with President Obama, might be able to do to rein in Putin.

I think that there has been a tendency to believe that Europe isn’t going to do anything here. But I think they realize they have to respond to the Putin challenge. I think military options aren’t off the table because we're weak, they're off the table because they are, you know, impossible to imagine. You're talking about going to a place that borders Russia, where Russia spends 20 times what Ukraine does on its defense budget.

And it's not entirely clear what the composition of the Ukrainian Army is. Remember, large parts of this Ukrainian Army in the east are ethnic Russians. It's not entirely clear that they would side with the Kiev government if there were to be some kind of war. So the sanctions route has to be the one that is tried. And the German chancellor seemed pretty firm that if this continues, the Germans, the Europeans, would join in broader sanctions. And they want to keep ratcheting them up.

But I think it's very important to note how much of an effect they've already had, because they have created so much uncertainty about Russia that no one is investing. So let's keep in mind that the economic sanctions strategy could work if it were more broadly implemented. And let's hope that that is a track that these two leaders are on.

Next entry »What next for Turkey's Syrian refugees?
« Previous entryWhy global health security matters to U.S.