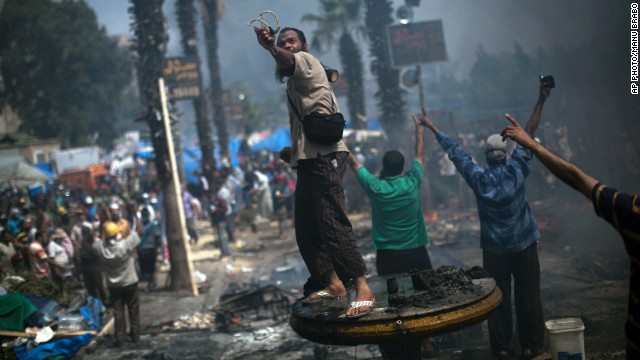 Editor’s note: Salil Shetty is Amnesty International's secretary general. The views expressed are his own.

Egypt’s criminal justice system was in the spotlight again after a court agreed to hand down the largest number of death sentences in modern memory. But this was not the work of a rogue judge, as some have suggested. Instead, the rulings were simply the latest in a series of incidents that point to a judicial system that is spiraling out of control.

In the space of a few short months, courts have made ready to sentence hundreds of people to death, jailed leading activists and protestors, including young women for protesting peacefully, and put journalists on trial for merely doing their job.

The courts have also hammered independent civil society. Last week, a court ruling effectively banned the April 6 Youth Movement, the activist group that spearheaded the mass protests that toppled Hosni Mubarak’s government in January 2011. And Egypt’s human rights groups may be next in the firing line, with memories of last year’s NGO trial still vivid in the minds of many activists.

Meanwhile, Egypt’s state prosecutors seem to have abandoned any pretense of establishing individual criminal responsibility for human rights abuses. Instead, they’ve thrown the book at anyone remotely suspected of supporting the ousted president, Mohamed Morsy.

Thousands now languish in prison, most detained on a copy-and-paste series of accusations ranging from murder to “participating in an unauthorized protest,” blocking traffic and belonging to the now-outlawed Muslim Brotherhood movement.

The judiciary’s message is clear: Don’t question the authorities.

And yet, for years, Egypt’s judiciary was one of the rare institutions that was prepared to stand up to the authorities. Many still speak of the judges who resisted repeated attempts by Mubarak’s administration to undermine their independence, and who shut down the courts in December 2012 after Morsy decreed himself virtually unlimited powers.

True, the authorities maintain the courts are still independent. But the hard truth is, a series of arbitrary rulings and a pattern of selective justice has muddied their hard-won reputation.

Meanwhile, even as the judiciary has been busy locking up government opponents, they have seemingly turned a blind eye to gross human rights violations by the security forces and ignored attacks on Coptic Christians and sexual assaults on women protesters. Indeed, the courts have jailed just a handful of police officials for abuses, despite the deaths of hundreds of people in protests and ongoing political violence and the ill-treatment of those in detention.

By giving security forces a free pass, the judiciary has opened the way for human rights violations on an unprecedented scale. When security forces brutally dismantled the protest camp at Rabaa al-Adawiya last August, they did so in the knowledge that they would not have to answer to anyone.

The operation unfolded in broad daylight, with hundreds killed and blood and fire in the streets. And yet, eight months on, not a single member of the security forces has been held properly to account for these killings. Instead, the judiciary seems to be intent on finishing in the courts the job that the police started in the streets – wiping out any form of dissent from the Muslim Brotherhood and their supporters to secular activists once and for all, no matter the cost to due process, human rights or their reputation. Time and time again, families of those killed in protests and political violence have told us that they despair of ever seeing justice for their loved ones.

“There is no justice anymore in this country anymore,” one relative told Amnesty International outside the court. “We do not trust anyone except God.”

The United States and European Union were quick to condemn this latest development, as they have been so many times before. But such protestations increasingly look like crocodile tears. The U.S. authorities cannot condemn lethal force against protesters on the one hand, while happily preparing to resume partial military aid to the Egyptian authorities by reportedly approving the delivery of Apache helicopters.

It's time to end the mixed signals and double standards. Saudi Arabia, the United Arab Emirates and Kuwait have openly backed the authorities’ crackdown on dissent. And it's also time for the United Nations’ human right body to take the lead. If Egypt’s authorities are unable to deliver truth and justice, then the Human Rights Council should explore other mechanisms to deliver accountability.

Ultimately, though, if the United States and Europe want to remain relevant, they must come up with a coherent strategy for tackling Egypt's human rights crisis and abandon the piecemeal and ineffective offerings we've seen so far.